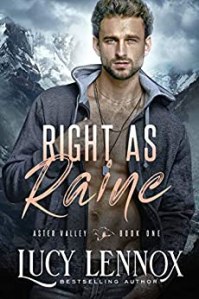 As the first openly gay professional football player, I can’t afford to make any mistakes, on or off the field. And the absolute biggest mistake I could make right now would be to fall for Mikey Vining, my best friend, employee and, more importantly, Coach’s baby boy. I might fantasize about Mikey at night-—every night—but actually touching him would be a serious personal foul.

And falling for him? That’s completely out of bounds.

I’ve learned my lesson about falling for one of my dad’s players. They’re a bunch of spoiled jocks with more muscles than brains. I’ve spent years learning to keep my eyes, and my hands, to myself. But resisting the temptation becomes nearly impossible when Tiller Raine and I end up together in a small cabin in a remote Colorado town.

Suddenly, there’s not much to do but look at each other. And talk. And hopefully, hopefully touch.

But what happens when our stay in Aster Valley is over and it’s time to return to the real world? Will Coach blow the whistle on our relationship? Or will Tiller admit there might actually be something he loves more than football after all?

I loved Tiller and Mikey’s story and got caught up in it as soon as I started reading. They’re both very different personalities, with Tiller’s passion being football, and Mikey’s cooking, yet fit so well together. I enjoy stories where both MCs try to convince themselves they won’t fall in love, then do exactly that.

I don’t know much about football, but that didn’t detract from the story. I thought the author walked the line between too much info for non-fans, yet enough to explain everything, very well. I liked how the story starts when they both meet, then picks up five years later. It’s obvious how much they care for each other, even without their mutual attraction, which they haven’t acted on, as neither is in the position to do so. Their relationship is fraught with reasons why they shouldn’t, and I liked how they get to the point where they can’t deny their feelings any longer. Tiller is very sweet and genuine, and I particularly liked the scene where he meets one of his fans. Not only does he take the time to talk, but he treats them with respect and is very aware that he wouldn’t be living his dream without them.

I thought the supporting cast were great, and I’m very happy that Sam and Truman are getting their own story. The town of Aster Valley incorporates everything I love about small town romances, with a caring community who rally around, and have distinct and quirky personalities. The world building is detailed and the town and its inhabitants feel very real. I liked the way the difference between Tiller and Mikey’s families was shown. I really felt for Mikey with the way his family were more concerned about themselves and what they wanted, than his happiness. The way his father acts, in particular, is horrible, and he puts Mikey in an impossible situation.

The last few chapters had me on the edge of my seat, sitting up too late, needing to make sure these guys got their HEA. I loved the glimpse into their lives months later, and the set up for the next book in the series.

Anne Barwell lives in Wellington, New Zealand. She shares her home with a cat with “tortitude” who is convinced that the house is run to suit her; this is an ongoing “discussion,” and to date, it appears as though Kaylee may be winning. In 2008, Anne completed her conjoint BA in English Literature and Music/Bachelor of Teaching. She has worked as a music teacher, a primary school teacher, and now works in a library. She is a member of the Upper Hutt Science Fiction Club and plays violin for Hutt Valley Orchestra. She is an avid reader across a wide range of genres and a watcher of far too many TV series and movies, although it can be argued that there is no such thing as “too many.” These, of course, are best enjoyed with a decent cup of tea and further the continuing argument that the concept of “spare time” is really just a myth. She also hosts and reviews for other authors, and writes monthly blog posts for Love Bytes. She is the co-founder of the New Zealand Rainbow Romance writers, and a member of RWNZ. Anne’s books have received honorable mentions five times, reached the finals four times—one of which was for best gay book—and been a runner up in the Rainbow Awards. She has also been nominated twice in the Goodreads M/M Romance Reader’s Choice Awards—once for Best Fantasy and once for Best Historical. Anne can be found at https://annebarwell.wordpress.com
View all posts by Anne Barwell →
This entry was posted in book review, gay romance reviews. Bookmark the permalink.