To be soulmates they first have to survive.

A serial killer stalks the streets of Boggslake, Ohio. The victims are always found in pairs, one human and one vampire.

Simon Hawthorne has been a vampire for nearly a hundred years, and he has never seen anything like it. Neither have the other supernaturals he works with to keep the streets safe for both their kind and the humans.

One meeting with Simon finds Ben Leyton falling for a man he knows is keeping secrets, but he can’t ignore the growing attraction between them. A recent arrival in Boggslake, Ben finds it very different from his native New Zealand, but something about Simon makes Ben feel as though he’s found a new home.

After a close friend falls victim to the killer, Simon is torn between revealing his true nature to Ben, and walking away to avoid the reaction he fears. But with the body count rising and the murders becoming more frequent, either, or both of them, could be the killer’s next target.

Author’s note: This story was originally released in 2014 by another publisher. This edition has been revised and re-edited with the end result being a better, stronger story.

“Cool. I knew you guys were like the Justice League or something.”

Lucas laughed. “I was going more for the Legion of Super Heroes, actually.”

“Yeah, but the League has Batman in it,” Blair began, “and the Legion is—” Luckily, whatever he was going to say was interrupted by the sound of a telephone ringing. Once he and Lucas started on one of their comics conversations, they’d go for what seemed forever.

“Aren’t you going to answer that?” Forge asked Simon.

“What?” Simon glanced around for the source of the noise. He didn’t get telephone calls and presumed it was coming from wherever Blair was.

“You’re the only one around here who insists on that horrible ringtone,” Forge pointed out, “so it’s obviously your phone.” He’d complained about it ever since Simon had explained—quite logically he’d thought—that if he was to carry a telephone, it made sense for it to at least sound like one.

“Oh, right.” Simon fished his telephone out of his pocket. Its screen was flashing with the name of the caller. Simon stared at it.

“You’re supposed to answer it, not stare at it,” Forge said. “Or have you forgotten how to again?”

“I know how to answer it.” Simon poked at the appropriate button, then held the telephone up to his ear. “Simon speaking. How can I help you?”

Forge snickered. Simon glared at him, thought for a moment about retreating to somewhere more private, then realized it would be a waste of time. Damn vampire hearing. Not that werewolves and ghosts were much better.

Perhaps he was calling to say he’d thought twice about meeting for coffee. But why would he take the time to do that? Surely if that were the case, he’d just not contact Simon again at all?

“Hello, Ben.” Simon took a couple of steps toward the door, half turning his back on the other occupants of the room.

“I rang to apologize,” Ben said, his words tumbling out over each other.

“Apologize?” Simon frowned. “Why?” If anyone should be apologizing for the way in which their conversation had ended, it should be him.

“I obviously upset you, and I’m sorry.”

“You didn’t,” Simon reassured him. “I overreacted. I do that sometimes.” He reached for his glass of milk and took a long drink. Feeling a little calmer, he collected his thoughts before breaking the silence. “Would you still like to meet for coffee?”

Lucas and Forge high-fiving was something best ignored, as was the smug expression on both their faces.

“Yeah, sure, that would be great,” Ben answered very quickly. “When and where? I’m working a long shift tomorrow, so that won’t work, but I don’t start until eleven on Thursday.”

After mentally consulting his calendar, Simon nodded. “That would be fine. I don’t have lectures on Thursday mornings. Do you know Hunter’s on West Thirteenth Street? We could meet there at nine.”

“I haven’t been there, but I’ll find it,” Ben said. “See you at nine then on Thursday?”

“Bye.” Ben paused. “Hey, who is that?” His voice took on a rather suspicious tone. “Simon, is there someone listening in on us?”

“Unfortunately, yes,” Simon said. “I share my… building… with some friends who don’t understand the concept of privacy. That was Lucas. I’ll explain on Thursday.”

“Goodbye,” Simon said again, this time to a darkened telephone. He shoved it back into his pocket.

“He sounds cute,” said Lucas. “I like the accent.” He grinned. “Can I come too? I want to hear how you explain me.” 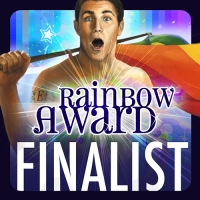 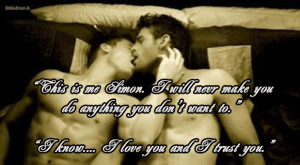 On Top Down Under Book Reviews Reviewed by Kazza K – 4 stars – and the lovely graphic on the left
The Blog of Sid Love Reviewed by Roberta – 4 stars
The Novel Approach Reviewed by Jackie – 5 stars
Gay List Book Reviews Reviewed by Nina – Quad Shot of Love
Rainbow Awards Honourable Mention – read the review.
The Blogger Girls – for the audio book – 4.5 for the story.
Prism Book Alliance – Audiobook reviewed by Caroline – 4 stars
Inked Rainbow Reads Reviewed by Kara – 4 stars
The Novel Approach – Audiobook reviewed by Maryann – 4.5 stars
Queeromance Ink – reviewed by Maryann – “…fascinating characters… I highly recommend “The Sleepless City” series… humor, action, and highly emotional moments filled with suspense and terror… an amazing tale.”
Queeromance Ink – reviewed by Linda – 4 stars – “…quite a story… Two vampires, a werewolf, a ghost, a human and a hacker all working together, quite a combination. I am about to start book two which has been written by a different author, Elizabeth Noble each author doing a book and hopefully there will be more to come.”

5 Responses to Shades of Sepia