A big welcome to J.Scott Coatsworth today as part of his blog tour for The Stark Divide from DSP Publications.

Inspired By…
As a writer, I sometimes get inspired by a particular song to write an entire story. My Italian-American gay wedding love story Flames was inspired in large part by the song “Things We Lost in the Fire,” a heart-wrenching song by Bastille about the lists we make after a fire, and who and what we blame.

At the moment, I’m finding inspiration for “The Rising Tide,” the sequel to “The Stark Divide,” from Lord Huron’s “Frozen Pines.” If you watched the Netflix series “Thirteen Reasons Why,” you may be familiar with Lord Huron – they did the track “The Night We First Met.”

“The Stark Divide” wasn’t inspired by a song, but I did find inspiration for the AI character, Lex, in the song “A Boy, A Girl and a Graveyard” – specifically for the way the AI’s ship was grafted together from biological and mechanical parts, a kind of Frankenstein:

It just spoke to me, and really helped inform Lex’s character and the ship she flies.

You can see the video here

I hope it speaks to you too. 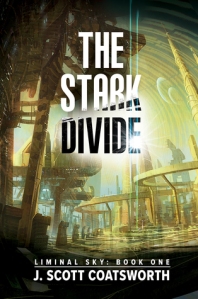 Blurb:
Some stories are epic.

The Earth is in a state of collapse, with wars breaking out over resources and an environment pushed to the edge by human greed.

Three living generation ships have been built with a combination of genetic mastery, artificial intelligence, technology, and raw materials harvested from the asteroid belt. This is the story of one of them—43 Ariadne, or Forever, as her inhabitants call her—a living world that carries the remaining hopes of humanity, and the three generations of scientists, engineers, and explorers working to colonize her.

From her humble beginnings as a seedling saved from disaster to the start of her journey across the void of space toward a new home for the human race, The Stark Divide tells the tales of the world, the people who made her, and the few who will become something altogether beyond human.

Humankind has just taken its first step toward the stars.

Book One of Liminal Sky

When I read a book by J. Scott Coatsworth I know I’m going to be treated to a story with fabulous world building, and interesting characters. The Stark Divide has all of that and more. One thing I really loved about this story is that although there are romances, they don’t drive it. Also it is populated by diverse characters with differing sexualities IE gay, straight, bi, and trans, which is accepted by this society in the future. The issues here aren’t that, but how mankind has ruined the Earth, both ecologically and because of war. The author has done a great job in taking current concerns and extrapolating where they might lead the future human race if we continue on our current course. The tent city for refugees in one part of the story echoed current news stories scarily well.

I loved the nods to other SF authors, such as Asimov and McCaffrey. Some were direct mentions, others more subtle.

The world building is interesting, and different to anything I’ve read before. Although the ship-mind has echoes of Anne McCaffrey’s ship series, Coatsworth uses it as a springboard, and flies. The ship-mind, world-mind, and station-mind are interesting, developed characters, as are the humans who take centre stage in this story. The idea of growing a planet using biological technology is brilliant, and it was obvious the more I read that it is very well thought out. I also liked how the author split the book into three different time periods, each one jumping forward from the previous. It gives the story an epic feel, which is perfect for what it is—the rebirth of the human race on another world told through the perspective of not only those who are key players in that journey but of the world itself, and the generation ship it becomes. The linking of time periods through both older versions of already familiar characters, and the introduction of the next generation was nicely done, as was the expansion of the planet-mind.

I liked too, that the characters are very human, and take the time to cry, whether in relief or grief. I felt as though I was reading about real people. Not all of them have the greatest of intentions, they make mistakes, and are often driven by emotions that are a mix of good and not so good.

The descriptive of space is wonderfully emotive—“the stars poking brilliant holes in the firmament above.” The descriptions of Forever—the name given to the world by the colonists—are not overdone as to bog down the story, yet make the setting very easy to visualise. I spent several evenings getting lost in the story and staying up far too late in order to read just one more chapter.

I’d recommend The Stark Divide to readers who enjoy science fiction with detailed world building, interesting characters, and an epic story. Highly recommended. 5 out of 5 stars.

“DRESSLER, SCHEMATIC,” Colin McAvery, ship’s captain and a third of the crew, called out to the ship-mind.

A three-dimensional image of the ship appeared above the smooth console. Her five living arms, reaching out from her central core, were lit with a golden glow, and the mechanical bits of instrumentation shone in red. In real life, she was almost two hundred meters from tip to tip.

Between those arms stretched her solar wings, a ghostly green film like the sails of the Flying Dutchman.

“You’re a pretty thing,” he said softly. He loved these ships, their delicate beauty as they floated through the starry void.

“Thank you, Captain.” The ship-mind sounded happy with the compliment—his imagination running wild. Minds didn’t have real emotions, though they sometimes approximated them.

He cross-checked the heading to be sure they remained on course to deliver their payload, the man-sized seed that was being dragged on a tether behind the ship. Humanity’s ticket to the stars at a time when life on Earth was getting rapidly worse.

All of space was spread out before him, seen through the clear expanse of plasform set into the ship’s living walls. His own face, trimmed blond hair, and deep brown eyes, stared back at him, superimposed over the vivid starscape.

At thirty, Colin was in the prime of his career. He was a starship captain, and yet sometimes he felt like little more than a bus driver. After this run… well, he’d have to see what other opportunities might be awaiting him. Maybe the doc was right, and this was the start of a whole new chapter for mankind. They might need a guy like him.

The walls of the bridge emitted a faint but healthy golden glow, providing light for his work at the curved mechanical console that filled half the room. He traced out the T-Line to their destination. “Dressler, we’re looking a little wobbly.” Colin frowned. Some irregularity in the course was common—the ship was constantly adjusting its trajectory—but she usually corrected it before he noticed.

“Affirmative, Captain.” The ship-mind’s miniature chosen likeness appeared above the touch board. She was all professional today, dressed in a standard AmSplor uniform, dark hair pulled back in a bun, and about a third life-sized.

The image was nothing more than a projection of the ship-mind, a fairy tale, but Colin appreciated the effort she took to humanize her appearance. Artificial mind or not, he always treated minds with respect.

“There’s a blockage in arm four. I’ve sent out a scout to correct it.”

The Dressler was well into slowdown now, her pre-arrival phase as she bled off her speed, and they expected to reach 43 Ariadne in another fifteen hours.

Pity no one had yet cracked the whole hyperspace thing. Colin chuckled. Asimov would be disappointed. “Dressler, show me Earth, please.”

A small blue dot appeared in the middle of his screen.

“Dressler, three dimensions, a bit larger, please.” The beautiful blue-green world spun before him in all its glory.

Appearances could be deceiving. Even with scrubbers working tirelessly night and day to clean the excess carbon dioxide from the air, the home world was still running dangerously warm.

He watched the image in front of him as the East Coast of the North American Union spun slowly into view. Florida was a sliver of its former self, and where New York City’s lights had once shone, there was now only blue. If it had been night, Fargo, the capital of the Northern States, would have outshone most of the other cities below. The floods that had wiped out many of the world’s coastal cities had also knocked down Earth’s population, which was only now reaching the levels it had seen in the early twenty-first century.

All those new souls had been born into a warm, arid world.

We did it to ourselves. Colin, who had known nothing besides the hot planet he called home, wondered what it had been like those many years before the Heat.

Scott spends his time between the here and now and the what could be. Enticed into fantasy and sci fi by his mom at the tender age of nine, he devoured her Science Fiction Book Club library. But as he grew up, he wondered where all the people like him were in the books he was reading.

He decided that it was time to create the kinds of stories he couldn’t find at his local bookstore. If there weren’t gay characters in his favorite genres, he would remake them to his own ends.

His friends say Scott’s mind works a little differently – he sees relationships between things that others miss, and gets more done in a day than most folks manage in a week. He loves to transform traditional sci fi, fantasy, and contemporary worlds into something unexpected.

Starting in 2014, Scott has published more than 15 works, including two novels and a number of novellas and short stories.

He runs both Queer Sci Fi and QueeRomance Ink with his husband Mark, sites that bring queer people together to promote and celebrate fiction that reflects their own lives.

Anne Barwell lives in Wellington, New Zealand. She shares her home with a cat with “tortitude” who is convinced that the house is run to suit her; this is an ongoing “discussion,” and to date, it appears as though Kaylee may be winning. In 2008, Anne completed her conjoint BA in English Literature and Music/Bachelor of Teaching. She has worked as a music teacher, a primary school teacher, and now works in a library. She is a member of the Upper Hutt Science Fiction Club and plays violin for Hutt Valley Orchestra. She is an avid reader across a wide range of genres and a watcher of far too many TV series and movies, although it can be argued that there is no such thing as “too many.” These, of course, are best enjoyed with a decent cup of tea and further the continuing argument that the concept of “spare time” is really just a myth. She also hosts and reviews for other authors, and writes monthly blog posts for Love Bytes. She is the co-founder of the New Zealand Rainbow Romance writers, and a member of RWNZ. Anne’s books have received honorable mentions five times, reached the finals four times—one of which was for best gay book—and been a runner up in the Rainbow Awards. She has also been nominated twice in the Goodreads M/M Romance Reader’s Choice Awards—once for Best Fantasy and once for Best Historical. Anne can be found at https://annebarwell.wordpress.com
View all posts by Anne Barwell →
This entry was posted in blog tour, book review, dsp publications, guest post. Bookmark the permalink.