A big welcome to Misty Massey as part of her tour with Psst Promotions for Kestrel’s Dance. 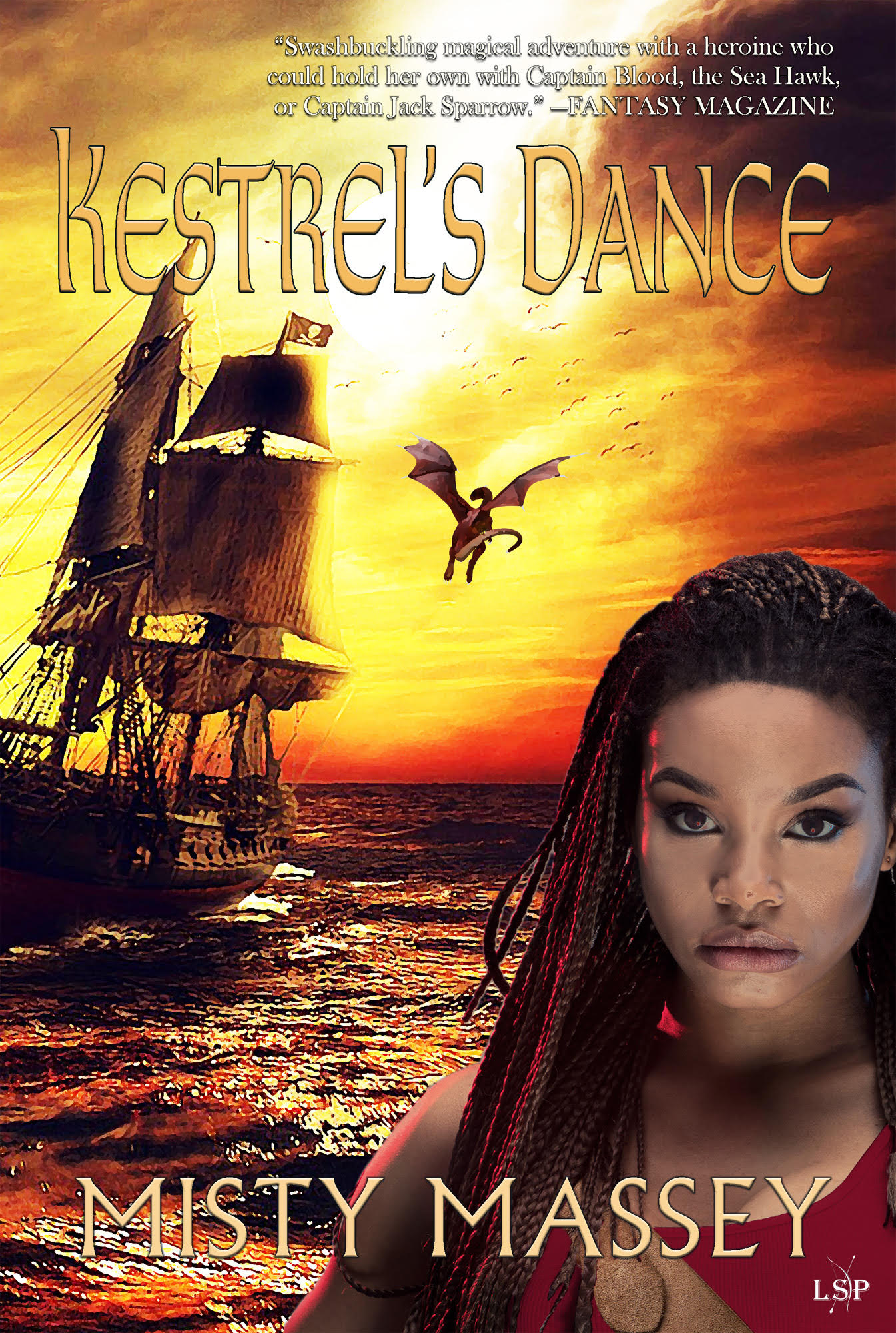 Kestrel, the King’s Privateer, is preparing to wait out the annual storm season when she receives an unexpected royal order to capture and deliver a rare creature for the king’s menagerie. Before she can weigh anchor, news reaches Kestrel of a long-ago friend in desperate need of help—in the opposite direction of her assigned voyage. In addition, her ship may be haunted by something big, loud, and terrifying.

Before Kestrel can plot a course, she crosses paths with an enigmatic dancer who offers an enticing bargain: sail her home to the Continent, an ocean away, and she’ll reveal the mysteries of magic Kestrel has longed all her life to know.

The temptation of answers endangers her crew and might ruin her privateer status. Worse, taking on this passenger could thrust her into the clutches of the ever-watchful Danisoban mages who lie in wait for her to make the perfect mistake.

Every decision is fraught with danger. Each wrong turn may mean her death or the death of her crew. And Captain Kestrel can walk away from none of them.

Kestrel, the pirate who can whistle up the wind, returns in book two of the Mad Kestrel Series. Captain Kes will defy the king, gamble with her friends’ lives, and run the risk of capture by evil mages to get her hands on the magical knowledge so long denied to her.

Excerpt
“Under normal circumstances, there was no reason I couldn’t blow that ship out of the water with cannons alone. This isn’t normal. The Danisoban shield swings the balance too far in the wrong direction.” she said.

Kestrel took the dancer by an elbow, drawing her away from her hiding spot and toward the lowest stair. “You weren’t afraid to board my ship, and you took the chance of showing me your skill. In front of DeadEye, no less. You’re no coward.” Slipping behind her, Kestrel pressed Nasrin to climb up.

The dancer placed both hands on the railings, hesitating. She clearly wanted to return to the relative safety belowdecks, but with Kestrel behind her, she was trapped. Nasrin climbed slowly, stopping at the top and turning to look at Kestrel. “You have no understanding of what I can do, rais.”

“If you think I don’t know how valuable you are, you haven’t been paying attention.” She leaned forward, both hands flat on the stair railing, and stared into Nasrin’s face. “Becoming captain of this ship nearly killed me, and it’s no less difficult remaining captain. I can’t afford to drop my guard with my men watching. So if this reluctance is your attempt to make me feel subordinate to you, as part of my training,” she emphasized the word, making it sound cheap, “I’ll not only fail to cooperate, but I’ll put you in a hackney boat and let you become someone else’s problem.”

Color drained from Nasrin’s face, and she sent a worried glance toward the ship.

Kestrel drew back. Why hadn’t she seen it before? So obvious, but she’d been so occupied, she’d missed the signs. “They’re not after McAvery at all, are they?”

Silence hung in the air between them, until Nasrin crossed her hands before her. “No. They are not.”

​Love the Mad Kestrel series and want to stay up to date on Misty Massey’s next release? Follow Misty on Amazon here: author.to/MistyMassey or check out her website: https://www.mistymassey.com/

Review from Booklist for The Mad Kestrel Series:
Massey debuts with a colorful romp through strange lands and stranger seas. In a world in which magic is a monopoly of the Danisobans, and all children showing signs of power are taken from their parents and raised by that order, young Kestrel had hidden her talent and eventually escaped to sea, where magic is cancelled by water. Now risen to the post of quartermaster of a pirate ship, she loves her life. But to keep it, she must never let anyone know that she can magically control the wind. When her captain is entrapped and arrested, the young quartermaster must gather and command the crew for a rescue. That takes all the strength and wit Kestrel can command—and guarded use of her magic. This Errol Flynn–ish swashbuckler features loads of action and larger-than-life characters, plausibly grounded in the realities of life at sea. A real page-turner, and a successor is in the works. 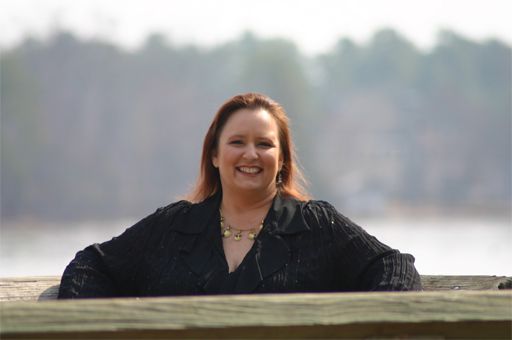 ABOUT THE AUTHOR:
Misty Massey is the author of Mad Kestrel, a rollicking adventure of magic on the high seas, Kestrel’s Voyages, a collection of short stories featuring those rambunctious pirates, and the upcoming Kestrel’s Dance. She is a co-editor of The Weird Wild West and Lawless Lands: Tales of the Weird Frontier, and was a founding member of Magical Words. Her short fiction has appeared in many anthologies and she’s working on a series of Shadow Council novellas for Falstaff Press featuring the famous gunslinger Doc Holliday. When she’s not writing, Misty studies and performs Middle Eastern dance and will, on occasion, surprise everyone with a batch of home-baked snickerdoodles. She’s a sucker for good sushi, African coffee, SC Gamecock football, and the darkest rum she can find. You can keep up with what Misty’s doing at mistymassey.com, Facebook and Twitter.​

Anne Barwell lives in Wellington, New Zealand. She shares her home with a cat with “tortitude” who is convinced that the house is run to suit her; this is an ongoing “discussion,” and to date, it appears as though Kaylee may be winning. In 2008, Anne completed her conjoint BA in English Literature and Music/Bachelor of Teaching. She has worked as a music teacher, a primary school teacher, and now works in a library. She is a member of the Upper Hutt Science Fiction Club and plays violin for Hutt Valley Orchestra. She is an avid reader across a wide range of genres and a watcher of far too many TV series and movies, although it can be argued that there is no such thing as “too many.” These, of course, are best enjoyed with a decent cup of tea and further the continuing argument that the concept of “spare time” is really just a myth. She also hosts and reviews for other authors, and writes monthly blog posts for Love Bytes. She is the co-founder of the New Zealand Rainbow Romance writers, and a member of RWNZ. Anne’s books have received honorable mentions five times, reached the finals four times—one of which was for best gay book—and been a runner up in the Rainbow Awards. She has also been nominated twice in the Goodreads M/M Romance Reader’s Choice Awards—once for Best Fantasy and once for Best Historical. Anne can be found at https://annebarwell.wordpress.com
View all posts by Anne Barwell →
This entry was posted in blog tour, Psst Promotions. Bookmark the permalink.