No Surrender by Morgan Brice

A big welcome to Morgan Brice as part of her tour with Gay Book Promotions for No Surrender.

Themes: Found family, loyalty, not keeping secrets, dealing with unresolved issues, putting the past to rest

It is a standalone book in the Badlands series and does not end on a cliffhanger. 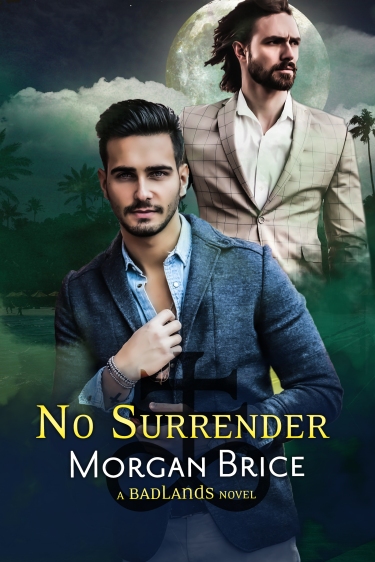 Psychic medium Simon Kincaide and sexy homicide detective Vic D’Amato met hunting a supernatural serial killer. Since then, Simon has become a police consultant on cases involving the paranormal, and Vic has gotten over his doubts about Simon’s abilities being real. Along the way, they fell in love and got engaged. But it seems like the danger never ends.

Now, the first case Simon and Vic worked together comes back to haunt them as the killer goes to court and all hell breaks loose. The killer has a crazy fan setting curses on key players in the upcoming trial. Ghosts from an old cold case suggest that someone got away with murder. And a supernatural creature attracted to fear and death is using the Grand Strand as its feeding ground. Simon and Vic feel like they’re waging a war on all fronts, but with the stakes so high, there can be No Surrender!

No Surrender is Book 5 in the Badlands series but can be read as a standalone.

“Since when do serial killers get fan mail?” Homicide detective Vic D’Amato fumed. “How fucked up is that?”

“They don’t just get fan letters; they get marriage proposals,” his partner Ross Hamilton replied, shaking his head in disbelief. “I don’t get it, but that doesn’t stop it from being true.”

Vic took a slug of coffee from his stained mug and barely kept from grimacing at the bitter taste. Hospitals and police precincts always made the worst java. “I guess it’s like the people who follow all the true-crime podcasts. We get paid to be hip-deep in the worst humanity has to offer, but doing it for fun? People are weird.”

“You’ve been a cop for how long, and you’re just figuring that out now?” Ross teased.

Vic shrugged. “Every time I think that I’ve lowered my expectations too far, reality says—‘Here, hold my beer.’”

“Yeah, well. I’m right there with you on this one.” Ross chuck‐ led. “Have you heard whether you and Simon will have to testify at the trial?”

“Pretty certain. Of all the charges, Fischer shooting Simon is the most ironclad, with plenty of witnesses,” Vic replied. “I’m not in any hurry to be part of the media circus, but I don’t see a way to avoid it.”

“Lucky you—the Slitter trial is shaping up to be the biggest deal Myrtle Beach has had in a long time.”

Vic grew up in a family of cops back in Pittsburgh. For generations, D’Amatos had been proud to serve. His father, brothers, and other relatives were still on the force up north while his sister was studying criminology. But an encounter with something supernat‐ ural Vic couldn’t explain had made him unwelcome with the Pitts‐ burgh police. Vic had relocated, started over in Myrtle Beach—and met the love of his life.

“I don’t want to put Simon through what happened the last time,” Vic confided.

“Not sure you’re going to have much choice about it.” Ross finished his coffee and set the cup aside. “The closer we get to the trial date, the more reporters will be angling for a scoop. I’m surprised there haven’t been some camped out in front of the store already.”

“I suspect Simon boosted the wardings against nuisance as well as malice. I tried talking him into going down to Charleston to spend some time with his cousin, but he flat-out refused to leave me here alone during the run-up to the trial.”

“Alone—with me and the captain and the rest of the depart‐ ment, plus a squad of lawyers and witnesses?” Ross joked.

“And not one of you with any magic, in a trial where the killer used spells to help him get away with murder,” Vic answered. “Simon doesn’t want to be in the spotlight—or the crosshairs—but if it comes to that, I don’t doubt he and his friends will come up with ways to protect us.”

Simon Kincaide, Vic’s fiancé, ran Grand Strand Ghost Tours. The boardwalk shop also offered psychic readings and séances, showcasing Simon’s abilities as a psychic medium as well as his knowledge of the spooky side of local history and his background as a former folklore and mythology professor.

When an impasse in the hunt for the Strand Slitter brought the investigation to a standstill more than a year ago, Vic tamped down on his deep skepticism about the paranormal and asked for Simon’s help as a psychic. Their first encounters with each other were prickly, and Vic accepted much of the blame for that since he had doubted Simon’s abilities and hated needing his help.

Simon turned out to be the real deal, and his visions plus the ability to communicate with the ghosts of the Slitter’s victims cracked the case—nearly costing Simon his life. In the year since then, Simon became an official police consultant, working cases with Vic and Ross when a supernatural connection seemed likely. Vic and Simon fell in love and now had a wedding to plan. Anne Barwell lives in Wellington, New Zealand. She shares her home with a cat with “tortitude” who is convinced that the house is run to suit her; this is an ongoing “discussion,” and to date, it appears as though Kaylee may be winning. In 2008, Anne completed her conjoint BA in English Literature and Music/Bachelor of Teaching. She has worked as a music teacher, a primary school teacher, and now works in a library. She is a member of the Upper Hutt Science Fiction Club and plays violin for Hutt Valley Orchestra. She is an avid reader across a wide range of genres and a watcher of far too many TV series and movies, although it can be argued that there is no such thing as “too many.” These, of course, are best enjoyed with a decent cup of tea and further the continuing argument that the concept of “spare time” is really just a myth. She also hosts and reviews for other authors, and writes monthly blog posts for Love Bytes. She is the co-founder of the New Zealand Rainbow Romance writers, and a member of RWNZ. Anne’s books have received honorable mentions five times, reached the finals four times—one of which was for best gay book—and been a runner up in the Rainbow Awards. She has also been nominated twice in the Goodreads M/M Romance Reader’s Choice Awards—once for Best Fantasy and once for Best Historical. Anne can be found at https://annebarwell.wordpress.com
View all posts by Anne Barwell →
This entry was posted in blog tour, gay book promotions. Bookmark the permalink.