A big welcome to Samantha Cayto as part of her release blitz with IndiGo Marketing and Design for Boi Bride from Pride Publishing.

Book 1 in the Treaty Brides series 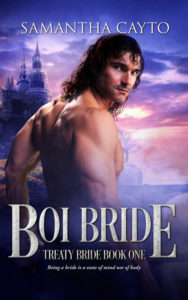 Being a bride is a state of mind, not of body.

The Kingdom of Moorcondia and the Marshlands have been warring for years. Now a treaty has been negotiated, but it needs to be sealed by a marriage between the ruling families. But the bride has bolted, leaving her brother, Taryn, to fill the role. There is nothing in the law of either country that says a bride has to be female.

Forced to dress in his sister’s gown and marry Soren, Taryn faces his fate with anger, resolve and frightening anticipation. While the Moorcondians are flexible in their sexuality, the Marshers are more prudish, plus Taryn has learned the hard lesson that an attraction to men is unnatural and wrong. His desire for Soren frightens him.

As a prince, Soren knows his duty and executes it without hesitation. As a widower, he looks forward to a new marriage, and his unexpected bride is very fetching. If only he can convince Taryn to put aside his fears and accept the pleasures of the marriage bed.

Taryn struggles to fill the role of a wife in the royal family, even as everyone else tries to adjust to the notion of a male bride. As the days pass, Soren comes to appreciate his bride more, and Taryn tries embrace his new role with enthusiasm instead of resignation. But politics is a treacherous place to navigate, putting their blossoming love in jeopardy.

The slap was delivered with less force than typical. Taryn didn’t even try to avoid it. He’d learned long ago that any show of fear only fed his brother’s cruel streak. Nor did he back away as Hobart leaned into his face.

“You will do as you are told.” Flecks of spit flew from Hobart’s mouth, the smell of beer wafting on his breath. Fury showed in his expression, testament to how desperate he must be.

Taryn tried to maintain his resolve over this order being suddenly thrust upon him, even as he knew he had no control over his own fate. “I can’t marry that man.” It was hard to believe he had to even say those words.

“You can and you will. It’s the only way the treaty can go forward. If our sister hadn’t run away to the nunnery, we wouldn’t be in this predicament.” Hobart’s gaze shifted to a spot somewhere in the distance, and his lip curled in a sneer. “She’d already taken her vows by the time I’d caught up to her.” He refocused his attention on Taryn. “A child of the chieftain has been promised to the Moorcondian prince. With Alissa gone, it’s down to you, as you are well past being a child.”

Taryn balled his hands in frustration. “My age is not the issue. He was promised a bride, not another man.”

Hobart huffed. “You do yourself too much credit. Truth be told, you’re more of a girl than Alissa ever was. Prettier, too.” His brother didn’t mean those words to be a compliment, and after years of such taunting, Taryn let them roll off his back.

“Tell that to the prince. You can’t hide my sex from him. He’ll see me for what I am even before he takes that frock off me.” He flung his arm in the direction of the maid who stood awkwardly with what should have been his sister’s wedding gown.

“Those fucking Moorcondians are a decadent lot. Men lie with each other all the time, I hear. The fuckers probably bed their horses, for all I know. And the wiseman has looked at their laws and ours. There is nothing that says a bride has to be female. I imagine the stupid princeling will find plowing your ass just as sweet as Alissa’s dried-up cunt—more so, likely. And I’m sure it’s a dream come true for you,” he added with a look of disgust.

Taryn again ignored the baiting and struggled to contain the tears that threatened to leak out. He was angry and scared in equal measure. The whole idea of his marrying the age-old enemy of his people was intolerable. He couldn’t blame his sister for seeking sanctuary from her fate. He was merely the unlucky victim of her self-preservation. She couldn’t have known what it would mean for him and probably wouldn’t have cared if she had. Their father hadn’t raised them to be generous with each other.

Taryn also had to admit that his brother was probably right about the Moorcondian prince. It was a very different society than his own—decadent, as Hobart had aptly put it. Their prince had ridden in with a colorful retinue and much fanfare. They were nothing like the earthier and frankly poor people of the Marshlands. Taryn couldn’t imagine how he was supposed to fit into such a world. Being the child of a Marsher chieftain mostly meant he had cleaner clothes and more to eat. His presence among the Moorcondians would be like a reed finch flitting around peacocks. If he’d been reviled by his own people, the Moorcondians would undoubtedly treat him with even more contempt.

This is so unfair! Railing against his fate out loud was worse than useless. If he put up any more of a fight, he’d be going to his own wedding with a black eye and split lip. Hobart was being restrained at the moment, likely so that Taryn would be as appealing to his groom as possible. Testing his brother’s patience would only end one way, however. He knew he was powerless in this, as with all other things. He’d learned to survive his family’s brutality, and he could cope with anything these foreigners threw at him. Besides, he’d heard that the opulent Moorcondian palace contained a vast library. If he were lucky, his new husband would give him the freedom to explore it.

That’s more like it. Finding some silver lining in any situation was what kept him sane. He would survive this misery as he had so many others. There was also some deep part of him that dared to be intrigued by the idea of being bedded by the prince, lending credence to Hobart’s taunt, though Taryn had snuffed that spark as soon as he’d become aware of it. Those kinds of thoughts weren’t to be tolerated. He didn’t want sex of any kind. Before Alissa had beat him to it, he’d been considering taking his own vows and living his life at the monastery. Anything would have been more appealing than living under the harsh judgment of his father and brother, plus he would have had time for scholarly pursuits. Now his future would be held by another powerful man—and one he knew nothing about.

There was no hope for it. Squaring his shoulders, he stared his brother down. “Very well. I will don that gown and greet my groom to be. If he rejects me, it won’t be my fault.”

Hobart’s expression turned as nasty as it got. “You’d better hope he doesn’t. The ceremony has already been delayed because you were off wasting the day away. If this treaty fails, I’ll stake you to the execution hill myself and revel in your slow death.”

His brother strode out of the tiny room Taryn had managed to call his own. Then he turned to the poor maid, who obviously wished she were anywhere else. He recognized the woman as the one who had served his sister. No doubt she was already frightened that she would be punished for her mistress’ escape. Certainly the guard who’d let her flee must have known tremendous regret the moment before Hobart had severed the man’s head from his neck. Taryn wouldn’t be the cause of trouble for her.

“Will that even fit me?” The pale green dress was trimmed with lace, luxurious for his people. But Anissa was a voluptuous woman. He lacked the essential shape to wear such a thing.

The maid gave him a shy smile. “I took it in this afternoon.”

So, others in our tribe knew my fate before I did. No surprise there. His father and brother treated him like a piece of furniture—and a useless one at that. It must have enraged them to realize that they needed him to seal the treaty, and bringing him into the discussion would never have occurred to them. He pushed back the hurt and took what little control he could. “I’ll need a quick bath.” He’d spent the day riding, mostly to stay clear of the Moorcondians, but he couldn’t go to his groom smelling like horse.

With his heart still lodged in his throat, and his stomach churning, he was happy for someone else to take command of the situation. The story of my life. I should never have been born to a powerful family. 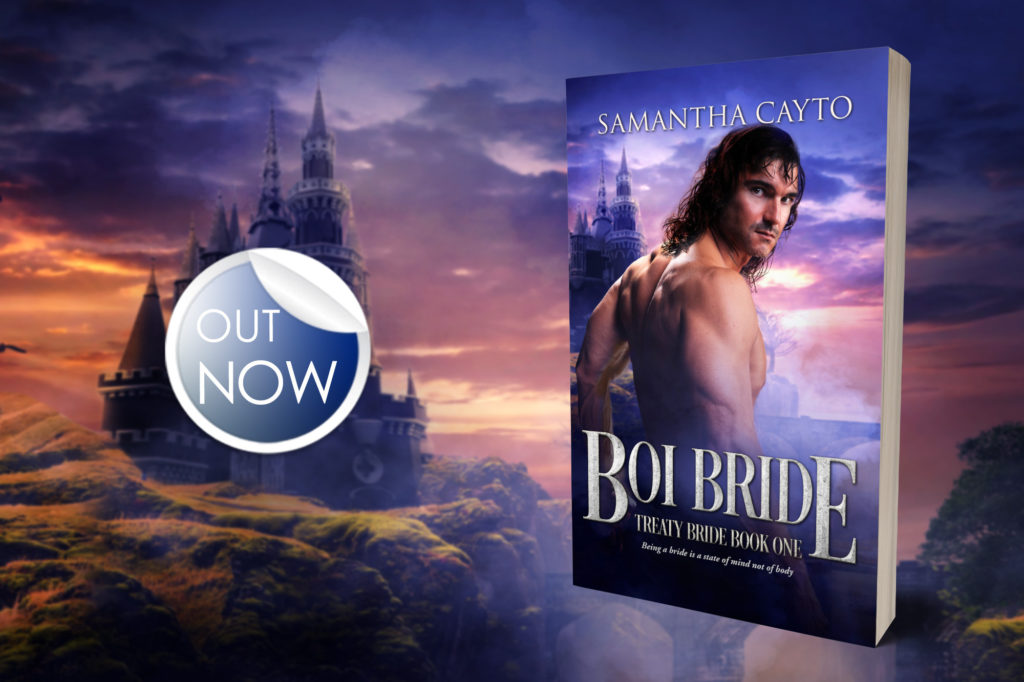 She lives a typical suburban life with her husband, three kids and four dogs. Her children don’t understand why they can’t read what she writes, but her husband is always willing to lend her a hand—and anything else—when she needs to choreograph a scene.