A big welcome to Robert A. Karl as part of his book blast with Gay Book Promotions for Clubbed 2: Anxiety, Anger, Activism.

It is part of a series, but can be read as a standalone.

It does not end on a cliffhanger. 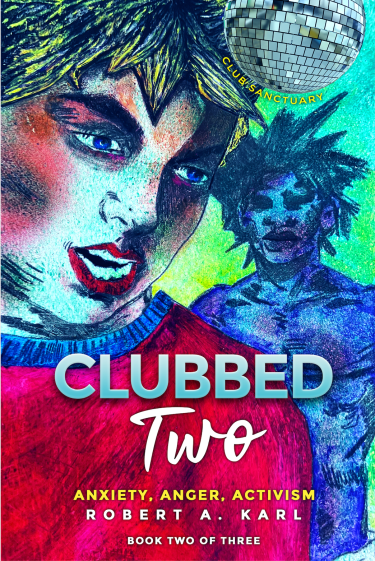 Every day is a good day to be gay.

CLUBBED TWO is historical fiction, set in Philadelphia from 1982 to 1992. Club Sanctuary can be seen as a metaphor for the greater LGBTQ community, but it is written as a real place, with characters who are fabulous, funny and flawed.

The author combines historical characters and events with fictional ones, creating a story that’s entertaining, informative and emotional. The love story between the two main characters, Joey and Henry, serves as a vehicle for connecting the stories of diverse, Queer characters.

This second book in the CLUBBED series continues the story as the LGBTQ community fights prejudice and ignorance in an effort to be recognized as people worthy of respect. Will the community be torn apart by fear, or will they come together to support PWAs? (People With AIDS)

Experience the drama, the beauty, and the excitement as well as the music, fashion and fads of the 80s with CLUBBED TWO: Anxiety, Anger, Activism.

When he let himself into Kirk’s room, he found Kirk sitting on a small sofa in front of a 13-inch black and white TV with no cable. The picture was fuzzy and the volume was low while a rerun of Happy Days was on.

“Just put the box on the coffee table and we can eat here. And keep out two beers and put the rest in the fridge.”

Kirk proceeded to eat, with no hint that anything sexual was about to take place between them. This felt awkward to Jando who didn’t really know how to act on a date. He was used to quick fuck-n-sucks, usually in a public place like The Hole at the club. So, he copied what Kirk did. He figured Kirk knew how to act better than he did.

After a few minutes, there was only one slice of pizza left. Kirk looked at the young Puerto Rican guy sitting next to him with a mischievous grin.

“Hey Bae, you know what I always wanted to do?”

“Please don’t tell me you always wanted to smash a guy in the mouth with a slice,” Jando joked.

“No, not that. But you know how in the movies, a couple will share something they’re eating, until they end up mouth-to-mouth. And then they have to decide whether to kiss or what they’re gonna do next?”

“Yeah,” Jando said. And not just people do that. Remember in that cartoon where Lady and the Tramp were eating spaghetti?”

Kirk laughed, actually snorting a little as he thought about that famous scene.

“If you’re the Lady, I guess that makes me the Tramp,” Kirk said, still laughing.

“You wanna try it?” Kirk asked, reaching for the final slice, trimming it into a very slim slice and pointing the uncrusted end towards Jando’s mouth.

Kirk closed his eyes and started to eat the crust on his side of the slice. He felt the pull as Jando joined him, taking small bites of the other side.

Kirk started laughing again. “Damn! I didn’t think about that we actually have to stop to chew.”

Now both of them were laughing, as Kirk continued to hold the slice in mid-air between their two mouths.

With gooey cheese dripping down and various pieces of pepperoni, green peppers, onions and mushrooms falling, and while they tried to keep from laughing, their mouths continued to inch closer.

Finishing the slice, they were both chewing as their lips finally brushed up against each other’s.

Swallowing hard, Kirk took the lead and kissed Alejandro forcefully. He pushed Jando back so he was prone on the sofa as he slid his tongue into Jando’s mouth, tasting the pizza but also the sweetness of Jando’s lips and tongue. Jando returned the favor, kissing with a passion that he’d been holding back for a few hours, needing some release soon.

“I wanna do this right. Let’s go in the bedroom,” Kirk whispered, lifting himself off Jando’s writhing body. “And bring the beers with you,” Kirk reminded him as he took hold of a walking cane that was next to the sofa, unnoticed by his Bae. 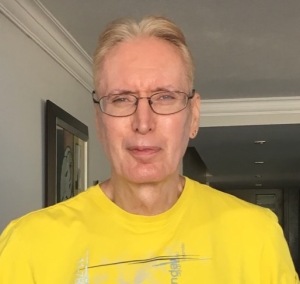 Robert A. Karl is a native son of Philadelphia, PA, a retired educator, a queer author, and the proud Gay Dog Dad to Zuna, the Awesome Boston Terrier. He now resides in San Juan, Puerto Rico, where he enjoys the beauty and culture of La Isla del Encanto, The Island of Enchantment.

Anne Barwell lives in Wellington, New Zealand. She shares her home with a cat with “tortitude” who is convinced that the house is run to suit her; this is an ongoing “discussion,” and to date, it appears as though Kaylee may be winning. In 2008, Anne completed her conjoint BA in English Literature and Music/Bachelor of Teaching. She has worked as a music teacher, a primary school teacher, and now works in a library. She is a member of the Upper Hutt Science Fiction Club and plays violin for Hutt Valley Orchestra. She is an avid reader across a wide range of genres and a watcher of far too many TV series and movies, although it can be argued that there is no such thing as “too many.” These, of course, are best enjoyed with a decent cup of tea and further the continuing argument that the concept of “spare time” is really just a myth. She also hosts and reviews for other authors, and writes monthly blog posts for Love Bytes. She is the co-founder of the New Zealand Rainbow Romance writers, and a member of RWNZ. Anne’s books have received honorable mentions five times, reached the finals four times—one of which was for best gay book—and been a runner up in the Rainbow Awards. She has also been nominated twice in the Goodreads M/M Romance Reader’s Choice Awards—once for Best Fantasy and once for Best Historical. Anne can be found at https://annebarwell.wordpress.com
View all posts by Anne Barwell →
This entry was posted in book blast, gay book promotions. Bookmark the permalink.