This week’s #teasertuesday is from Shadowboxing, Book 1 of my WWII Echoes Rising series. 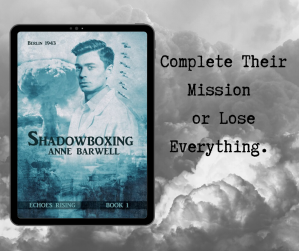 He closed his eyes, calming himself, trying to act as though nothing had happened. Perhaps if he left the room before the body was discovered, he might have a better chance of survival. A thin trail of blood ran across his hand from where he’d cut himself. Some of it had already dripped down the side of the desk to seep into the leather of Kluge’s briefcase. More blood; that was all he needed. The room spun wildly, memories of the dream from the night before bombarding his mind. He had to focus. He reached into his pocket and bound his cut hand with his handkerchief, then used the clean end of it to wipe the briefcase. This was crazy. He couldn’t undo what had happened. Still he had to try, even if only to hold on to some semblance of logical thought and reason.

In a sudden gesture of frustration, he threw the leather case against the wall, the sense of twisted satisfaction that washed over him afterwards, taking the remainder of his nausea with it.

You can read more of this story here.

Anne Barwell lives in Wellington, New Zealand. She shares her home with a cat with “tortitude” who is convinced that the house is run to suit her; this is an ongoing “discussion,” and to date, it appears as though Kaylee may be winning. In 2008, Anne completed her conjoint BA in English Literature and Music/Bachelor of Teaching. She has worked as a music teacher, a primary school teacher, and now works in a library. She is a member of the Upper Hutt Science Fiction Club and plays violin for Hutt Valley Orchestra. She is an avid reader across a wide range of genres and a watcher of far too many TV series and movies, although it can be argued that there is no such thing as “too many.” These, of course, are best enjoyed with a decent cup of tea and further the continuing argument that the concept of “spare time” is really just a myth. She also hosts and reviews for other authors, and writes monthly blog posts for Love Bytes. She is the co-founder of the New Zealand Rainbow Romance writers, and a member of RWNZ. Anne’s books have received honorable mentions five times, reached the finals four times—one of which was for best gay book—and been a runner up in the Rainbow Awards. She has also been nominated twice in the Goodreads M/M Romance Reader’s Choice Awards—once for Best Fantasy and once for Best Historical. Anne can be found at https://annebarwell.wordpress.com
View all posts by Anne Barwell →
This entry was posted in echoes rising, Teaser Tuesday. Bookmark the permalink.