A big welcome to D.G. Carothers as part of their release blitz with Gay Book Promotions for T.A.G. You’re Found.

It is not a standalone story.

The Assassins’ Guild is a continuous series and must be read in order.

This book does not end on a cliffhanger.

Are you ready for another thrilling T.A.G. adventure?

Mr. Ti is hot on the trail of the Poacher, having finally discovered his identity. A trap is laid, but will it get sprung?

Follow Mr. Ti as he hunts down his prey. But who is hunting whom? And will love smack Mr. Ti in the butt face?

Find out this and more exciting answers to questions lurking in the depths of your mind in this next archive from The Assassins’ Guild.

Attention: There is explicit language, violence, and sexual content suitable only for mature audiences. Who are we kidding? Only on bad days are we more mature than teenagers.

I took the chair across from the slender, silver-haired older man with an uneasy smile. “Good evening, Zio.”

“Nicola, you’re looking,” he scrutinized my appearance especially considering I had worn jeans compared to his thousands of dollars bespoke suit, “underfed.” He waved at someone behind me, and a bowl of the same soup Don Athos was eating appeared before me.

“Thank you, Zio.” Now that the food was in front of me, I realized I was famished. I didn’t remember if I had eaten today. I picked up a spoon and took a bite of the hearty vegetable soup.

“Your mother is worried about you.”

I snorted and finished my mouthful before speaking. “My mother is only worried about the money I send her.” My mother wasn’t Don Athos’s sister, but our family had worked for the Stagliano family for many generations. I grew up at the country estate with my brother and cousins, calling Don Athos uncle.

“Don’t disrespect your mother, boy.” Despite Don Athos nearing seventy, he was still a formidable man and not one to trifle with even if you didn’t know he was one of the most powerful men in the world.

“I’m sorry, Zio.” I looked intently at my soup and took another bite. “Is she well?” I asked after the silence continued.

“She is fine, just worried about her only remaining son.” He paused again. I was sure for dramatic effect. There must be a school people like the capi went to that taught you how to look intimidating when speaking and how to make grandiose speeches. “She tells me that you took another trip out of the country.”

I nodded in confirmation because it was pointless to deny it. If he was coming to me with this, he already knew where I was. I tore a piece of bread off the loaf on the table and dipped it into the remaining bits of soup.

“I have told you to stop looking into the bombing. It is done and over. Nothing will come of continuing down this road.” Don Athos’s voice softened. “Nico, I know you loved your brother, and I am saddened by his loss as well as the loss of my son, may God rest their souls, but he wouldn’t want you to continue on this way. He’d want you to finish school and start your life the way you should have.”

“Zio, I’m so close to finding him. I finally know who bombed the hotel. And if I can just locate them.” I leaned forward in my seat. I refused to believe that Enzo was dead. I couldn’t, wouldn’t believe it until I heard it from the horse’s mouth.

“Stupido, do you think we don’t know who did it?” Don Athos whisper-yelled to not draw more attention to our discussion. “Of course, we know.”

“Then why haven’t you asked The Assassins’ Guild about the abnormality in the account about my brother or who hired them in the first place?” I tried to restrain myself from raising my voice as I boldly called out the organization’s name that was only whispered of like the Boogieman.

“You don’t understand, boy. You don’t just ask The Assassins’ Guild questions, and you never ask who hired them. It’s a fool’s errand.” If I didn’t know him better, I’d say that he looked scared just talking about them.

D.G. Carothers is actually a dragon very cleverly disguised as a human. They are a non-binary author of LGBTQIA Romance and Urban Fantasy, who enjoys writing original and entertaining stories. They are very excited to share the worlds they’ve created with you.

D.G. currently lives in Tennessee with their platonic life partner, who is not a dragon. They yearn to live back in Europe and will some day. In their spare time they are addicted to losing themselves in the lovely worlds created by other authors

D.G. is committed to writing the stories they see in their head without restrictions. Love is blind and doesn’t see gender, race, or sexuality. 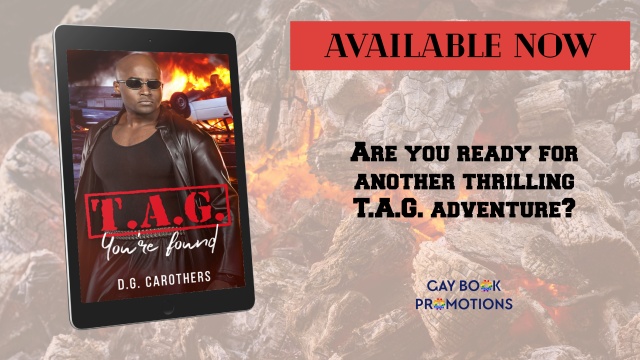