A Dashwood of Sense and Sensibility by Anyta Sunday

A big welcome to Anyta Sunday as part of her tour with Gay Romance Reviews for A Dashwood of Sense of Sensibility.

Blog Tour, Excerpt & Giveaway:
A Dashwood Of Sense And Sensibility
By Anyta Sunday

Noah Dashwood is the practical type. Now the beloved family home’s been sold to settle their father’s debts, Noah’s number one priority is finding a new place to live for himself and his brother. But the old house’s last gift to him is completely unexpected: Wade Ferrars, literally walking over broken glass to shake his hand, sexy and lovely and everything a guy could dream of. He even makes Noah . . . believe in romance.

Why so hot and cold?

What is he hiding?

Oh God. Disaster. No money, no home, no man . . . Zach Dashwood should really, like, get a steady paying job. Help his brother out. Ohhh, maybe Ask Austen Studios has room for a talented musician? Maybe he should just nip in there . . .

This guy with terrible tie-taste is really something. Working on a Sunday, poor thing. Okay, they should hang out, maybe he’ll put in a good word with the boss—

Why has this guy not been snapped up yet? New mission!

Two very different brothers. Both in for a surprise.

A modern gay retelling of Jane Austen’s Sense and Sensibility 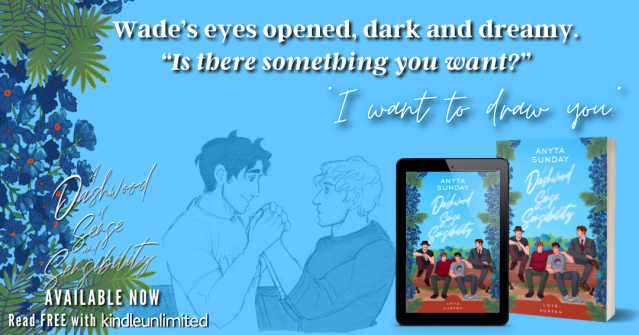 When it came to love, Noah Dashwood was practical.

A sensible approach. Not everyone was destined for a Meet Cute, surges of electricity, knee-buckling laughter that doubled at the first snort. Or missing their partner when they were standing on opposite sides of their own wedding pavilion.

Not six hours married, and his old neighbours Finley and Ethan were just like that. Gazing. Perhaps wishing all their finely dressed, dancing guests would disappear from Mansfield’s back garden so they could get intimate under the pear blossoms.

A vibrant bout of laughter drew Noah’s attention to his rosy-cheeked brother, sliding up beside him. “Dance?”

Zachary—a twenty-two-year-old musician with his first recording under his belt—walked this earth with romantic illusions sparkling in his green eyes.

He held out a hand to Noah, and Noah clasped it tightly. “No one else is biting.”

“No one else is biting yet.” Zach said with a sigh, gaze flickering left. “But a happily ever after is out there for you.”

Noah halved the length of their steps. “I have you. I have my work. The sea-bird sanctuary. These guys. I’m happy. Fine. Just fine.”

Dreams like that . . . most often led to dashed expectations. Disappointment.

He cleared his throat. “The only thing I dream about is finding somewhere neat and affordable for us to live.” Elliot and Wentworth had migrated to Wentworth’s boat so their house could accommodate Noah and Zach. They’d been taking up space there while they prepared their childhood home for the day it would cease to be theirs. They couldn’t carry on like that forever.

Again, Zach’s gaze snagged to the left. Noah had been cataloguing these glances. 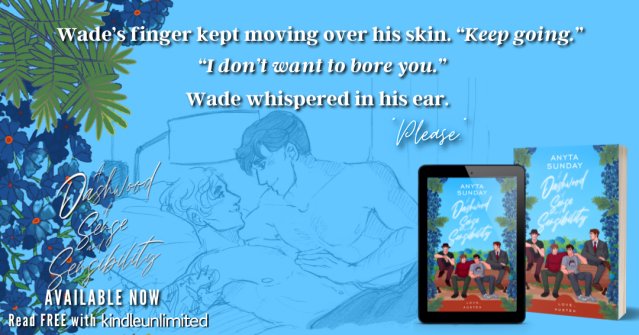 To celebrate the release of A Dashwood Of Sense And Sensibility, Anyta is giving away an e-set of the “Love, Austen” Series so far (6 eBooks)!

Enter the Rafflecopter giveaway for your chance to win!

About the Author:
I’m a big, BIG fan of slow-burn romances. I love to read and write stories with characters who slowly fall in love.

Some of my favorite tropes to read and write are: Enemies to Lovers, Friends to Lovers, Clueless Guys, Bisexual, Pansexual, Demisexual, Oblivious MCs, Everyone (Else) Can See It, Slow Burn, Love Has No Boundaries.

My books have been translated into German, Italian, French, Spanish, and Thai.

For information about new releases and freebies, follow me on BookBub:
https://www.bookbub.com/authors/anyta-sunday