What The Trees Know by Nancee Cain

A big welcome to Nancee Cain as part of her tour with Enticing Journey Book Promotions for What The Trees Know.

Title: What the Trees Know

Jed doesn’t think so. Forced to live with his grandmother after the death of his parents, he’s mad at the world. He doesn’t believe in God, much less the folk magic his grandmother practices in the isolated mountains of Appalachia. He doesn’t fit in, and anger simmers within him, ready to explode.

Then Skylar arrives—a girl who’s experienced evil firsthand. Though lost in silence, she forges a connection with Jed, his grandmother, and the neighbors who come for potions and spells. Even without a voice, she embraces her new life.

Eventually Jed flees, but not for the right reasons. And his insides still burn with rage, leaving him hollow and even more unhappy—until the day he feels compelled to return home.

Skylar understands why Jed has returned. It has nothing to do with her summoning spell. He’s come home to heal. She’s known for being a healer and can consume his sins so he can find peace. But the only way she knows how requires death…

The trees shiver. They know, too. They always do. 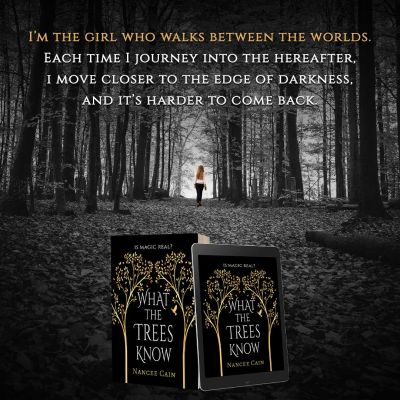 Nancee is a retired addiction counselor & nurse who worked to support her coffee and reading habit. A terrible insomniac, her nights are spent writing paranormal and contemporary romances with a serrated edge. She puts the fun in dysfunctional and is a known book hoarder.

Anne Barwell lives in Wellington, New Zealand. She shares her home with a cat with “tortitude” who is convinced that the house is run to suit her; this is an ongoing “discussion,” and to date, it appears as though Kaylee may be winning. In 2008, Anne completed her conjoint BA in English Literature and Music/Bachelor of Teaching. She has worked as a music teacher, a primary school teacher, and now works in a library. She is a member of the Upper Hutt Science Fiction Club and plays violin for Hutt Valley Orchestra. She is an avid reader across a wide range of genres and a watcher of far too many TV series and movies, although it can be argued that there is no such thing as “too many.” These, of course, are best enjoyed with a decent cup of tea and further the continuing argument that the concept of “spare time” is really just a myth. She also hosts and reviews for other authors, and writes monthly blog posts for Love Bytes. She is the co-founder of the New Zealand Rainbow Romance writers, and a member of RWNZ. Anne’s books have received honorable mentions five times, reached the finals four times—one of which was for best gay book—and been a runner up in the Rainbow Awards. She has also been nominated twice in the Goodreads M/M Romance Reader’s Choice Awards—once for Best Fantasy and once for Best Historical. Anne can be found at https://annebarwell.wordpress.com
View all posts by Anne Barwell →
This entry was posted in blog tour, enticing journey book promotions. Bookmark the permalink.