Book Review – All Fired Up by Jenn Burke 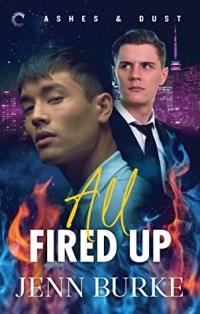 Don’t miss this riveting and romantic spin-off series from Jenn Burke, author of Not Dead Yet.

Paranormals are dying. All over the city, with no explanation and only one thing in common: their magic is missing.

Vampire and private investigator Evan Fournier isn’t supposed to be taking on paranormal cases, but when the murderer hits close to home, he agrees to look into it. The last thing he expects is to become a target himself—and then to become irrevocably bonded to the man who just tried to kill him.

With his memory gone and his soul bonded to a stranger, former firefighter Colin Zhang wants to be anywhere else. He doesn’t have a damn clue why he just tried to kill Evan, and he didn’t even know about magic until just now. The sooner he can get back to his real life, the better.

But every time either of them tries to leave, pure agony stops them short. Forced to work with Evan or suffer the consequences, Colin must excavate the secrets buried in his missing memories while battling two rising threats: the conspiracy behind the murder, and his mutual attraction to the bond mate he never wanted.

This is the first book I’ve read by this author, and I will be reading more. I haven’t read the series leading into this one, but although that didn’t detract from my enjoyment, I need to read it! The mix of paranormal and found family is one of my favourite tropes, and I loved the characters, and fabulous world building.

The characters drew me into the story immediately and I wanted to keep reading to find out more about them. I love the idea of a vampire PI, and the mix of paranormals who make up Caballero Investigations each bring their own skill set and personalities to the mix. The banter is fun, yet caring, and these characters feel like family.

I liked Evan and the fact he has issues he’s still working through. As Colin says, they make him human. I liked the different take on vampire rules, especially with Wes changing those up too. Poor Colin. He’s gone through so much, and is very much a man out of time. I loved the twist of what he is, what that means, and his discovery of how things have changed. The bond between him and Evan makes for an interesting layer in their relationship, and I want to know what happens with them going forward.

The plot was fabulous, and full of curveballs. Although this book resolves some of it, it keeps more in reserve to unravel in the rest of the series. I liked how nothing came easy investigation wise, and thought the magic side of the story was clever, especially the way the spell is cast, and full of consequences. I liked how the author didn’t shy away from those consequences either, and that nothing was exactly how it seemed at first re the bad guy and what was going on.

I loved Wes and Hudson and will be checking out their series.

Anne Barwell lives in Wellington, New Zealand. She shares her home with a cat with “tortitude” who is convinced that the house is run to suit her; this is an ongoing “discussion,” and to date, it appears as though Kaylee may be winning. In 2008, Anne completed her conjoint BA in English Literature and Music/Bachelor of Teaching. She has worked as a music teacher, a primary school teacher, and now works in a library. She is a member of the Upper Hutt Science Fiction Club and plays violin for Hutt Valley Orchestra. She is an avid reader across a wide range of genres and a watcher of far too many TV series and movies, although it can be argued that there is no such thing as “too many.” These, of course, are best enjoyed with a decent cup of tea and further the continuing argument that the concept of “spare time” is really just a myth. She also hosts and reviews for other authors, and writes monthly blog posts for Love Bytes. She is the co-founder of the New Zealand Rainbow Romance writers, and a member of RWNZ. Anne’s books have received honorable mentions five times, reached the finals four times—one of which was for best gay book—and been a runner up in the Rainbow Awards. She has also been nominated twice in the Goodreads M/M Romance Reader’s Choice Awards—once for Best Fantasy and once for Best Historical. Anne can be found at https://annebarwell.wordpress.com
View all posts by Anne Barwell →
This entry was posted in book review, gay romance reviews. Bookmark the permalink.