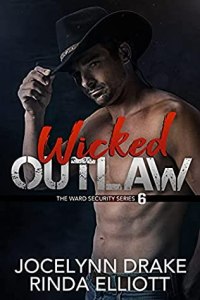 Blurb:
Cole loves the city. He loves the noise, chaos, and having tacos delivered at 2 a.m.

He loves his job at Ward Security. He might look like a bodyguard, but there’s nothing better than being counted as one of the hacking tech triplets.

There is no way he will ever love horses, cows, and the great wide open of Texas.

At least, that’s what he thought until JB Alexander rode into his life.

He can’t deny the burning attraction of JB’s easy smile and weird sense of humor.

And while they’re dodging gun shots, crazy neighbors, meddling family, and secret plots, Cole might be forced to admit that he’s found an even greater love.

I love these authors, and although I need to play catch up with a couple of the books in this series, that didn’t prevent me from enjoying this one immensely. The characters are wonderful, the banter fun, and I love the action scenes.

I loved both Cole and JB, and it was great learning more about them, after only meeting them briefly in previous books. Cole is wonderfully geeky about his tech, and I love how he brings three cases of computer gear to a so called enforced vacation. I liked how he also holds his own physically against one of the bad guys, and how his attraction to JB chips away at, and blows his sexuality, or his misconception of it, out of the water.

I loved JB when I first ‘met him’ in Rialto, so am very happy he has his own book, and HEA, and loved him even more after reading this story. I enjoyed the family feel of the ranch, and his relationships with his family as well as his growing friendship and more with Cole. His and Cole’s friendship felt natural and I loved their conversations as they get to know each other properly. My favourite scene re their relationship is the moment where Cole shows his support in a very subtle but intimate way.

As always, the supporting cast rocks. I love Noah, and how JB realises he’s moved past Noah and yet they are still good friends who have each other’s backs. Rowe is crazy but in a good way, and I loved the code words as the guys head into the field, and everything else that goes with that. I loved JB’s parents. They totally rock.

I liked the mystery part of the story as JB and Cole try to figure out who is behind the misfortune plaguing their ranch and others in the area. Although I did guess who the bad guy was, it ramped up the excitement of the action part of the plot, rather than detracted from it.

Cole was never going to guess JB’s full name, and I can well see why he goes by JB. Loved the ending, and I hope we haven’t seen the last of either of these guys, or the supporting cast at the ranch.

I’ll be grabbing this one for my paperback collection.

Anne Barwell lives in Wellington, New Zealand. She shares her home with a cat with “tortitude” who is convinced that the house is run to suit her; this is an ongoing “discussion,” and to date, it appears as though Kaylee may be winning. In 2008, Anne completed her conjoint BA in English Literature and Music/Bachelor of Teaching. She has worked as a music teacher, a primary school teacher, and now works in a library. She is a member of the Upper Hutt Science Fiction Club and plays violin for Hutt Valley Orchestra. She is an avid reader across a wide range of genres and a watcher of far too many TV series and movies, although it can be argued that there is no such thing as “too many.” These, of course, are best enjoyed with a decent cup of tea and further the continuing argument that the concept of “spare time” is really just a myth. She also hosts and reviews for other authors, and writes monthly blog posts for Love Bytes. She is the co-founder of the New Zealand Rainbow Romance writers, and a member of RWNZ. Anne’s books have received honorable mentions five times, reached the finals four times—one of which was for best gay book—and been a runner up in the Rainbow Awards. She has also been nominated twice in the Goodreads M/M Romance Reader’s Choice Awards—once for Best Fantasy and once for Best Historical. Anne can be found at https://annebarwell.wordpress.com
View all posts by Anne Barwell →
This entry was posted in book review, IndiGo Marketing. Bookmark the permalink.