The Blacksmith and the Ex-Con by Jackie North

A big welcome to Jackie North as part of her release of The Blacksmith and the Ex-Con.

Cowboys Rule My World
For years, I’ve loved old-fashioned heroes, and figured that the Victorian era was my time of choice. But as I mused over the three westerns in my Love Across Time series (Honey From the Lion, Wild as the West Texas Wind, and Ride the Whirlwind, I realized I have quite a fondness for cowboys. Oddly, I only recently became aware (in the last year) that cowboys are a very solid trope within the m/m romance genre.

You know how you tend to stay away from the thing you love just so you make sure you don’t ever get tired of it? No? Is it just me? My Dad would only eat strawberry shortcake twice a year, on his birthday and on Father’s Day because, as he told me, he never wanted to get tired of it.

Me, I would watch westerns, and admire the whole “he walks the earth” kind of vibe that the heroes would give off. I would think fondly about cowboy boots, and chuck wagons, and cowboy coffee, and sigh. And then move on because, of course, I didn’t want to grow
tired of cowboys.

But then I started seeing those gorgeous western, cowboy-themed covers in the m/m romance community, and was able to let out my inner cowboy lover and really enjoy rolling in that world of cattle drives, open skies, and spectacular sunsets.

What do I love about cowboys? I love the way they wear blue jeans like a second skin, with their sweet behinds all snug and tight beneath the denim. I love how they tip their hats and say “ma’am” or “sir” or whatever is required. I love how they don’t complain when they get thrown, and how they do hard work with their hands and get all sweaty and dusty and have to take showers that actually need to be taken.

While plotting out the six books for the Farthingdale Ranch series, one of the first ideas that came to me (even before The Foreman and the Drifter) was for The Blacksmith and the Ex-Con. I had a vision in my head of a cabin set off by itself, much like John Henton’s cabin in Honey From the Lion. I liked the idea of writing about two men being alone together and falling in love.

Except in this instance, in present day, the cabin would have hot and cold running water, Netflix, ice cream in the freezer (at all times!), and it would only be a quick drive to Farthing to get anything that was needed. There would be no hardship, no want, no suffering in the cold.

In this cabin, which is for the use of the ranch’s blacksmith, there is a river-rock fireplace (much like the one in John Henton’s cabin, though perhaps a bit bigger), but since it is summer, the fire is never lit. There is also a lovely deck that overlooks the slow-moving Horse River and the sloping land beyond. In short, I built a cabin I would very much want to live in. Something simple and homey and cozy.

I was also inspired to write this story by the scene in Honey From the Lion, where Laurie grouses that the chuck wagon is drawn by cowboys and ranch hands, rather than actual horses. The explanation, at the time, was that the horses needed to be shod and so had been hauled off in horse trailers.

My question to myself was: if this is a ranch, why are horses being taken away to be shod? There are a lot of horses. Horses that are ridden a lot, every day, almost, would need to be shod somewhat frequently? Shouldn’t there be a blacksmith? And if so, why was he missing?

In answer, my mind came up with the idea that the blacksmith was laid low, perhaps by an accident or a bad cold, but that he was generally on hand to shoe horses and fix things. In The Blacksmith and the Ex-Con, we find out from Jasper Nash, the blacksmith and farrier, that he got kicked in the leg by a horse and was down for a whole week, and was not there when Laurie Quinn went missing.

And then I began to wonder what this blacksmith thought about while he was resting up and healing? What did he watch on Netflix? Did anyone fuss over him? Was he lonely? Did he, perhaps, rather enjoy being alone? And what kind of character could I create to bring my sweet blacksmith out of his shell? And thus a story is born.

Also, since Bill always assures us there are no biters at Farthingdale Ranch, which horse would be so fractious that it would kick Jasper, the nicest man on the planet? Maybe I’ll figure that out in a future story. 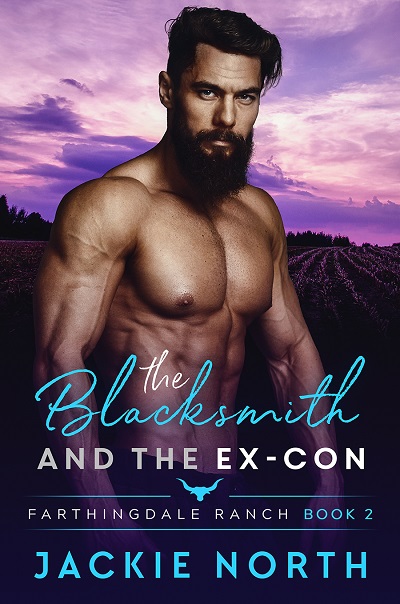 Blurb:
“If anybody ever needed him, Ellis did. Ellis was broken. Jasper liked to fix things.”

Jasper has the perfect life. He’s a blacksmith at a small guest ranch in Wyoming. The last thing he needs is to have that perfect life interrupted by a shifty-eyed ex-con, but the ranch needs the tax benefits the ex-con program will bring.

Traumatized by his time in prison, Ellis can barely speak. He’s about to be offered parole. He knows he will hate working on the guest ranch, but what other option does he have?

About the Author
Jackie North has been writing stories since grade school and spent years absorbing the mainstream romances that she found at her local grocery store. Her dream was to someday leave her corporate day job behind and travel the world. She also wanted to put her English degree to good use and write romance novels, because for years she’s had a never-ending movie of made-up love stories in her head that simply wouldn’t leave her alone.

As fate would have it, she discovered m/m romance and decided that men falling in love with other men was exactly what she wanted to write books about. In this dazzling new world, she turned her grocery-store romance ideas around and is now putting them to paper as fast as her fingers can type. She creates characters who are a bit flawed and broken, who find themselves on the edge of society, and maybe a few who are a little bit lost, but who all deserve a happily ever after. (And she makes sure they get it!)

She likes long walks on the beach, the smell of lavender and rainstorms, and enjoys sleeping in on snowy mornings. She is especially fond of pizza and beer and, when time allows, long road trips with soda fountain drinks and rock and roll music. In her heart, there is peace to be found everywhere, but since in the real world this isn’t always true, Jackie writes for love.

Anne Barwell lives in Wellington, New Zealand. She shares her home with a cat with “tortitude” who is convinced that the house is run to suit her; this is an ongoing “discussion,” and to date, it appears as though Kaylee may be winning. In 2008, Anne completed her conjoint BA in English Literature and Music/Bachelor of Teaching. She has worked as a music teacher, a primary school teacher, and now works in a library. She is a member of the Upper Hutt Science Fiction Club and plays violin for Hutt Valley Orchestra. She is an avid reader across a wide range of genres and a watcher of far too many TV series and movies, although it can be argued that there is no such thing as “too many.” These, of course, are best enjoyed with a decent cup of tea and further the continuing argument that the concept of “spare time” is really just a myth. She also hosts and reviews for other authors, and writes monthly blog posts for Love Bytes. She is the co-founder of the New Zealand Rainbow Romance writers, and a member of RWNZ. Anne’s books have received honorable mentions five times, reached the finals four times—one of which was for best gay book—and been a runner up in the Rainbow Awards. She has also been nominated twice in the Goodreads M/M Romance Reader’s Choice Awards—once for Best Fantasy and once for Best Historical. Anne can be found at https://annebarwell.wordpress.com
View all posts by Anne Barwell →
This entry was posted in guest post. Bookmark the permalink.