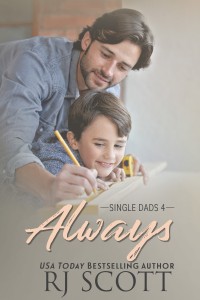 Blurb:
Lives change in an instant, but with family found and forever love, there is always hope.

Impetuously putting his life on the line, Adam saved a child trapped in a car wreck and suffered career-ending injuries. Living with chronic pain, and at his lowest moments, he had friends who wouldn’t let him give up, a family who had his back, and even though his future was different from what he’d always planned, he at least had hope. When Cameron and Finn land on his doorstep, he never dreamed that he would fall in love with the small family or that maybe he’d get to be a hero again.

Cameron goes from being a devoted husband to a single dad overnight. With his neatly planned future in ruins, he will do anything to make a new life for his son, even if it means moving to the other side of the country. Renting a room from Adam is the first step in making a home for him and Finn, but falling for the former firefighter was never part of the plan.

The shadows from Cameron’s past might take a long time to touch this fragile future, but will he have to face the consequences alone when they do? Or will there always be hope?

I love this series, and Adam and Cameron’s story kept me reading and turning pages as I had to see what happened next. I liked the underlying feeling that Cameron’s past might turn up to derail their happy ending, although I always trust this author to give me a HEA.

I loved both Adam and Cameron and how they were both dealing with the consequences of their pasts, although in very different ways. I thought the author wrote about living with chronic pain very realistically and with sensitivity. I liked that there was no quick fix for Adam’s injury, but more of a learning to live with it, which included good days and bad days. I liked that Cameron is up front about his past, and doesn’t hide what happened or the mistake he made in trusting, and falling for, his ex. I thought the author did a great job in showing how very good at gaslighting Graeme is. I felt for Cam with the way his life unravelled and his ex took everything from him, except for Finn. Graeme’s a nasty piece of work.

I liked that Cameron always put Finn first, and Finn’s growing friendship with Adam too. I loved Adam’s family and how they accept Cameron and Finn. I also loved how, once they get past their initial awkwardness how Adam and Cam get into a comfortable routine and start to feel like a family with Finn, despite neither of them recognising, or admitting, it.

One of the reasons I enjoy reading in series is meeting up with MCs from other books, and seeing them from different viewpoints. I liked seeing how settled Eric, Leon, and Sean are now in their relationships and catching up with their families too. I loved Nick, so very happy it’s his book next.

The drama and action part of the story was well written, and a page turner. I loved the part Adam played in it, and how they’re both determined to protect each other. Despite his actions, I felt bad for their attacker, as he was as much a victim as Cam.

Their HEA was perfect, and I loved how, as well as being very satisfying as a romance, the story also gave Adam and Cam, and Finn, a rich future to look forward to.