This week’s #teasertuesday is from Shades of Sepia, book 1 of The Sleepless City series I wrote with Elizabeth Noble. 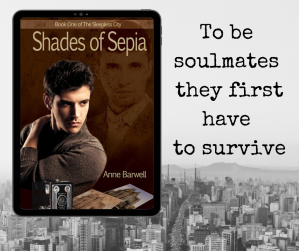 “Why are you so sure I’ll want to leave?” Ben frowned. Was Simon going to finally share whatever secret he’d been keeping? “I’m sure, whatever it is, it won’t be that bad.” He managed a laugh. “After all, it’s not as though you’re an axe murderer or something, right?”

“Very funny,” Ben said, although Simon’s expression didn’t seem to suggest he was making a joke.

Ben slid his other arm around Simon’s waist and pulled him close. “Look, I know you’re nervous about whatever this is, but I’m not planning to go anywhere. I trust you. I don’t know why, but I do. I like being with you, and I’d like to see where this goes. Hell, I want it to go somewhere.” He kissed Simon softly.

“You might not after tonight.” Simon leaned into Ben, the hardness of his erection very obvious even through his coat. Whatever this was about, Simon wanted Ben as much as Ben wanted him.

“Yeah, but don’t make that decision for me already.” Ben kissed Simon again. Warmth flowed through him, and he groaned aloud.

Simon broke the kiss abruptly. “We can’t do this here,” he said, trembling. His skin was flushed, and he was breathing heavily. He started to lead Ben back to the car. “Please.”

“Okay. But once we’ve talked and you’ve told me whatever…” Ben felt himself grow bright red. God, he sucked at this. “You’re okay, right? You’ve been tested? I haven’t been with anyone for a couple of years, and—”

“I’m not contagious, Ben.” Simon opened the passenger door of the car for him. “You’re not going to catch anything from me, I promise.”

You can read more of this story here.

Anne Barwell lives in Wellington, New Zealand. She shares her home with a cat with “tortitude” who is convinced that the house is run to suit her; this is an ongoing “discussion,” and to date, it appears as though Kaylee may be winning. In 2008, Anne completed her conjoint BA in English Literature and Music/Bachelor of Teaching. She has worked as a music teacher, a primary school teacher, and now works in a library. She is a member of the Upper Hutt Science Fiction Club and plays violin for Hutt Valley Orchestra. She is an avid reader across a wide range of genres and a watcher of far too many TV series and movies, although it can be argued that there is no such thing as “too many.” These, of course, are best enjoyed with a decent cup of tea and further the continuing argument that the concept of “spare time” is really just a myth. She also hosts and reviews for other authors, and writes monthly blog posts for Love Bytes. She is the co-founder of the New Zealand Rainbow Romance writers, and a member of RWNZ. Anne’s books have received honorable mentions five times, reached the finals four times—one of which was for best gay book—and been a runner up in the Rainbow Awards. She has also been nominated twice in the Goodreads M/M Romance Reader’s Choice Awards—once for Best Fantasy and once for Best Historical. Anne can be found at https://annebarwell.wordpress.com
View all posts by Anne Barwell →
This entry was posted in Teaser Tuesday, The Sleepless City. Bookmark the permalink.