Book Review & Release Blitz – The Hunted and the Hind by A.L. Lester

A big welcome to A.L. Lester as part of their release blitz with IndiGo Marketing and Design for The Hunted and the Hind from JMS Books.

I love this series. The world building is fabulous, with an interesting paranormal world set against the historical backdrop of the 1920s. I enjoyed how the very different characters came together in this final story to protect Keren.

The Frem society is interesting, and I liked the political side of this story, with the reason why Fenn had been sent on his mission in the previous book, and why Keren is so important.

I felt for Will, missing his twin brother, and the connection they had. Mark’s final message is very bittersweet, and made me sniffle. I enjoyed how Will and Fenn build on their relationship, and how Fenn is able to help Will finally grieve. Their connection as that relationship grows into more is very cool.

I love Lew, with his 2016 sensibilities and slang, which none of the others get. I liked seeing glimpses of his and Alec’s relationship, and how far Alec has come despite his determination to cling to the ordinary. Will’s mother is great, and takes everything in her stride. The conversation she and Will have is very heartfelt. I’d love to know what happened to Will’s grandfather, and am sad this series is finished.

The final showdown as Malach tries to break through—and more—is exciting and tense.

I read this story in one sitting, and will miss this series as I’ve very much enjoyed reading about these characters, their world, and their time.

Title: The Hunted and the Hind 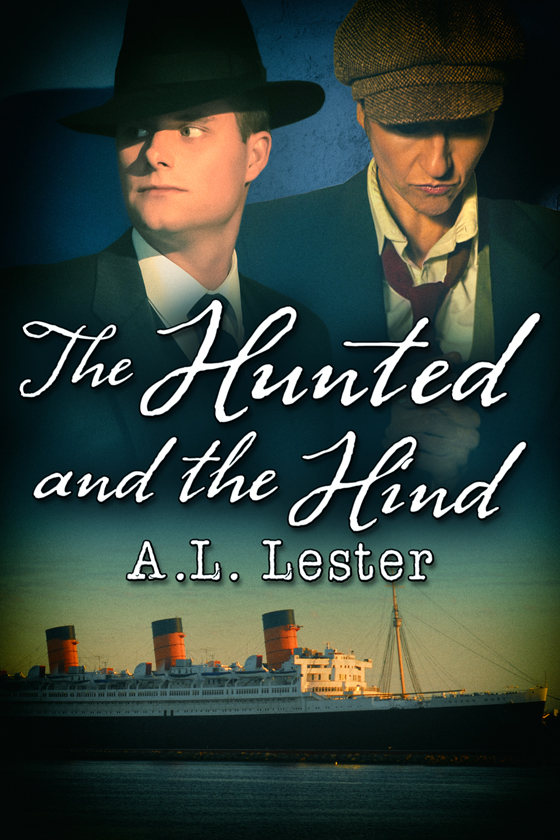 Inadvertently tumbling through the border after Fenn and then thrown into the middle of the internecine political disputes of their people, Sergeant Will Grant of the Metropolitan Police has spent three months in prison in the Underhalls of the Frem. When Fenn comes to free him and return him home through the border, he has very little time to work out what’s going on before the sudden appearance of Fenn’s missing younger sibling, Keren, throws Fenn for a loop.

Instead of returning them to London as planned, the trio step through the border to the Egyptian desert. Once they work out where they are, it’s a two week trip back to England with the possibility of pursuit both onboard ship and when they reach home.

Will the journey give Fenn and Will time to resolve the feelings they have been dancing around since the day they met? How will they keep Keren from recapture by the faction who tried to persuade Fenn they were dead? And has Will’s friend Alec forgiven Fenn for lying about their motives when they first traveled to London four months ago?

The Hunted and the Hind is the third and final book in the 1920s ‘Lost in Time’ trilogy. The books need to be read in order.

“Can I ride the one over there, please, Will Grant?” Keren called across the yard, pointing at creature with a white stripe down it’s face that they’d become enamored of earlier.

Will Grant nodded and came across the courtyard toward them. “You may. That was my intention, anyway.” They looked at Fenn. “Do you have animals you ride in the Outlands?” they asked.

Fenn stroked Olive’s nose. “Not like these,” they said. “These are beautiful creatures. We sometimes ride the antacas we use for pack animals. Some people breed them for meat, too. They have horns and a very sharp spine. And are extremely bad tempered. They’re smaller than these, though. Bumpy.”

Will Grant leaned against the stable door next to Fenn, as Keren took themselves across the yard to quiz the horse-keeper. He rubbed at Olive’s ears absently. “You’re not bumpy, are you girl? No-one would dream of accusing you of such a dreadful thing!”

The horse shook its head and buffeted Will Grant’s stomach. He staggered a little against Fenn’s side and blew out a laugh. It was very strange to see them like this, out of their city clothes, in what Fenn assumed were special clothes for riding. The humans seemed to have a variety of different clothes for each task, rather than sensible clothing that would serve for most things. Here in private, both Fenn and Keren had donned the extra clothes made for them in Port Said, patterned more or less on their usual loose trousers and robes.

It was even stranger to see Will laugh like this. After the conversation with their parent this morning, Will had seemed to let go of a little of the tension that had gathered round them since this trip had been mooted. It was a nice look on them, Fenn decided. Underneath it all was the tension and sadness that was Will’s permanent signature. But a little of that had eased. Fenn wondered what it would take to ease the rest of it.

“Come on, then,” Will Grant said, straightening. “Let’s get Keren up and we can go out for a wander through the woods and down to the lake. And once we’re there we can try our kias out near the water. We’re lucky Mama has kept the stable going, with no-one but her here to ride.” He glanced around. “The men coming home needed the work.”

Fenn nodded. “Your parent is a good person,” they said, cautiously. “They reminded me of Ana. Very…,” they searched for an accurate, polite word.

Will Grant laughed. “Very, yes,” they said. Their eyes had softened. “I haven’t done right by her,” they said. “I’ve been too wrapped up in my own head. I should have come home before.”

“It doesn’t sound like you were ready,” Fenn replied. “Home is a difficult place to be, sometimes.”

Will Grant shook their head. “But still. She’s my mother and she lost all of us. Father died a few years before the war and she missed him dreadfully. It was a love match, I think. They spent a lot of time together, anyway.”

Both of them were leaning against the stable door now, talking quietly whilst they watched the bustle as the horse-keepers got animals out for them all to ride.

“Is that not always the case, here?” Fenn asked, curiously.

Will looked at them over Olive’s nose. “For Mama’s generation, not always. Sometimes, marrying well is more important than whether you have strong feelings for your potential partner. Making the marriage and producing children is the thing, you see.”

Fenn looked at him.

“Not for me,” they hastened to add. “Mama has given up trying to marry me off. She made it clear this morning that she has no expectations in that direction at all.” They hesitated. “She said, you are welcome to visit here, too. She knows that I…have feelings…for you.”

Fenn was silent for a moment. “I would be honored to visit them,” they said. “Whether or not you have feelings for me, Will Grant.” They felt the shiver of embarrassment in Will’s kias. Humans did not talk about this sort of thing, apparently. Probably because most of them didn’t have kias and had to articulate everything verbally. It was very graceless and left a lot of room for misunderstanding. How did people without any kias at all between them manage?

They gently opened the edges of their kias to Will Grant and allowed their own feelings to be felt. Admiration, friendship, desire, love. All of it. Will glanced over and smiled, clearly picking some of it up without even trying to reach back.

The two of them stood against the door in amicable silence until the chief horse-keeper called across the yard, “Ready, Mr William? I’ve got Peter tacked up for you, here!” 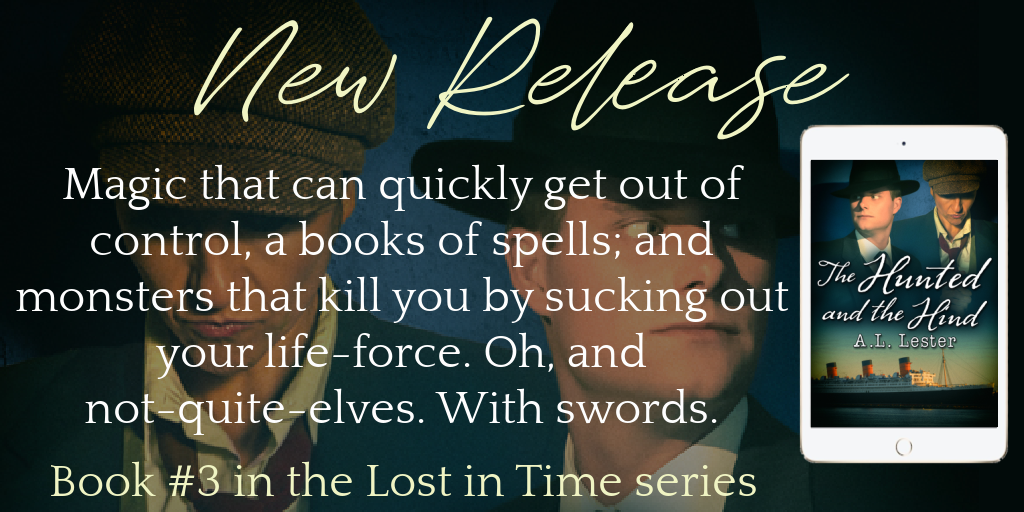 Writer of queer, paranormal, historical, romantic suspense. Lives in the South West of England with Mr AL, two children, a badly behaved dachshund, a terrifying cat and some hens. Likes gardening but doesn’t really have time or energy. Not musical. Doesn’t much like telly. Non-binary. Chronically disabled. Has tedious fits.

Anne Barwell lives in Wellington, New Zealand. She shares her home with a cat with “tortitude” who is convinced that the house is run to suit her; this is an ongoing “discussion,” and to date, it appears as though Kaylee may be winning. In 2008, Anne completed her conjoint BA in English Literature and Music/Bachelor of Teaching. She has worked as a music teacher, a primary school teacher, and now works in a library. She is a member of the Upper Hutt Science Fiction Club and plays violin for Hutt Valley Orchestra. She is an avid reader across a wide range of genres and a watcher of far too many TV series and movies, although it can be argued that there is no such thing as “too many.” These, of course, are best enjoyed with a decent cup of tea and further the continuing argument that the concept of “spare time” is really just a myth. She also hosts and reviews for other authors, and writes monthly blog posts for Love Bytes. She is the co-founder of the New Zealand Rainbow Romance writers, and a member of RWNZ. Anne’s books have received honorable mentions five times, reached the finals four times—one of which was for best gay book—and been a runner up in the Rainbow Awards. She has also been nominated twice in the Goodreads M/M Romance Reader’s Choice Awards—once for Best Fantasy and once for Best Historical. Anne can be found at https://annebarwell.wordpress.com
View all posts by Anne Barwell →
This entry was posted in book review, IndiGo Marketing, jms books, release blitz. Bookmark the permalink.