A big welcome to Susan Saxx as part of her tour with Silver Dagger Book Tours for A Refuge Bay Christmas. 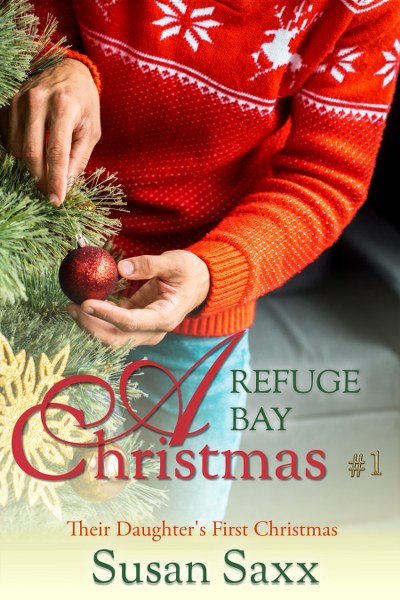 Two Gay Men. Their Adopted Daughter. Her First Real Christmas.
Welcome to Refuge Bay!
Where trouble is brewing in a little girl’s heart this holiday season…
When Nathan and Og fell in love, little did they realize their union would end up in an unexpected adoption: that of the six-year old runaway child they found at Hope House. Now her first Christmas is fast approaching, and everything is hard for the orphan who’s never had a real family. She’s still dealing with ghosts of the past, and she’s trying to do it alone. How can Nathan, Og, and the whole gang at Hope House, show her everything Christmas can be, in a forever family? Most importantly, how can they make sure that the Refuge Bay community’s unparalleled Christmas magic will work its special miracle…on her?
It’s the holidays. Come and celebrate with all of Refuge Bay this holiday season…
“A great read. This reads like a warm fuzzy blanket or an awesome Hallmark Christmas movie.”
– Reviewer
“I don’t know what it is about this series, or these people but I am totally hooked!”– Reviewer
*This book can be read as a standalone, though readers will enjoy the additional details provided by the main series.
* This holiday sub-series is part of the main Men of Refuge Bay series, beginning with Book 1: Nathan Unwrapped. Book 2: Zachary Undone, is slated for publication in early 2021.
*Sign up for Ms.Saxx’s M/M newsletter HERE!
Add to Goodreads
Amazon * Apple * B&N * Kobo * Vivlio

Amazon Bestselling Author Susan Saxx is a top 2 Amazon bestseller with her small town military romance series, Real Men, currently over 10 books long. She has a passion for the small towns of North America, and sets her compelling stories in the north country (Jack’s Bay), western mountain country (Terrence Point, Dawson Ridges, Golden) and in Chesapeake Bay (Refuge Bay), all replete with quirky yet big-hearted neighbours always willing to lend a hand—and an opinion, whether requested or not.
Susan also deeply loves Christmas, with numerous Christmas stories in her series, and adds more holiday books (including Valentine’s and Halloween), annually.
As she continues to write the beloved Real Men series, she is applying her passion for love without boundaries to the m/m genre. Her first book in the Men of Hope House series is garnering excellent reviews, with formerly m/f only readers exhorting others new to the genre to pick up the first in the series, calling it, “Pure Joy”, and ‘one of the best books I have read in a very long time’ – GoodReads.
Susan can be reached at susansaxx@gmail.com.
Website * FB Author * Readers Group * Twitter
Instagram * Bookbub * Amazon * Goodreads * Newsletter

3 Responses to A Refuge Bay Christmas by Susan Saxx