Book Review & Tour – Spell of the Werewolf by J.R. Loveless

A big welcome to J.R. Loveless as part of her tour with Gay Book Promotions for Spell of the Werewolf.

I enjoyed the world building in this story and how both Justin and Vincent are outsiders within their own kind. Justin hunts other werewolves and has nightmares about what he’s done both as the wolf, and himself, while Vincent as a hybrid works with hunters. I liked how they find common ground not only in their physical attraction, but their need for atonement.

I loved the feeling of found family especially with Justin and Kara, and I liked how his relationship with Vincent built on that family instead of destroying it. I also liked how Vincent and Justin were drawn to each other, and provide each other with the comfort and escape from their past they both desperately need.

I liked the mix of magic and werewolves, and how the way it worked together was a bit different and was a very real threat. I liked how it affected Justin too. The wolf who bit Justin is a nasty piece of work, and although I’m quite happy to see him dealt with, I liked how the ending left things open for more stories. I thought the fight scenes were well written, and exciting.

I’d like to see more of these characters and their world.

Book Title: Spell of the Werewolf 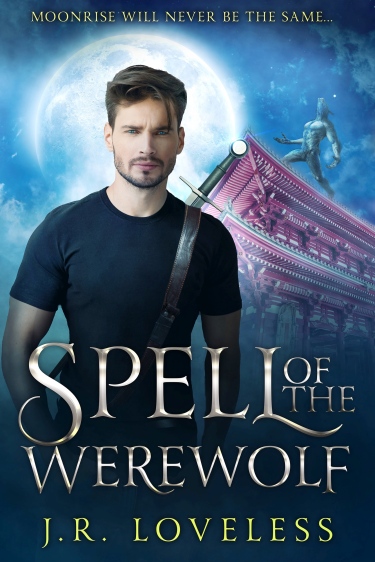 Moonrise will never be the same.

A werewolf with a death wish bargains with a hunter for salvation.

Justin has spent several lifetimes atoning for the violent nature of his curse. A mindless angry beast several nights a month, he carries a burden of blood for past sins. Tired and lonely, he’s seeking an end to his torment.

Vincent bears the curse, though only by half. A hybrid, he hunts those of his brethren who let their monsters take over. And he’s hell bent on destroying them all, until he’s forced to deal with one who’s begging for peace. Except deliverance wears many guises.

Their desire for redemption erupts in a fiery passion drawing them closer together.

“Because you are so closed-minded you can’t see anything but what you want to see. Justin is a good person. He didn’t ask to be what he is. We can still find the one who bit him!”

Vincent laughed, a clear cynical sound behind it. “If he can find the one who made him. The number of werewolves grows every day. It’ll be impossible. So, no. He has to die!”

Justin had heard enough. He stepped forward and called, “Vincent.”

Vincent whipped his head around and smiled, harsh and bitter. “So you decided to show. This human means that much to you?”

“Let her go,” Justin snarled, ignoring Vincent’s question. “Then we can fight.”

Justin pulled the sword from his back and moved into the light shining from the fountain. “Let’s do it then.”

“Ah, so the little boy went and got himself a big knife, did he? Do you even know how to use it?” Vincent taunted him.

He did an expert twist of his wrist, sending the blade of the sword spinning around him. Vincent’s eyes narrowed just before he attacked. Their blades clashed against one another as they fought; their movements almost an elegant dance between them. “So you’ve had some training, kid? It’s not enough to save your ass.”

Vincent thrust at him, but Justin cut up with his sword and sent Vincent’s flying into the air. The blade clattered against the ground, landing a few feet from them. Before Justin could strike at him again, Vincent leapt backward, grabbed his sword, and flipped, landing several yards away from Justin. Justin knew it wasn’t going to be an easy fight.

Circling one another, their swords glinted in the moonlight. Justin narrowed his eyes while he waited for Vincent to make the first move. Too impatient to wait for Justin to make his move, Vincent went to strike once more. Justin blocked the blow and attempted a return hit, but Vincent was too fast, crashing his sword into Justin’s. Swords crossed at the blade, Justin thrust upward and managed to nick Vincent’s cheek. Vincent cursed, jumped backward, and touched the small cut. His fingers were dark with a smear of blood when he dropped his hand from his cheek. Justin smiled mockingly at him. “Aw. Did I cut you?”

Vincent curled his lip into a snarl and rushed toward Justin with his sword raised. The fight continued for some time, and eventually they stood facing one another, panting for breath. Justin could see Vincent’s anger reflecting outward from bright violet eyes. He’d never met another person with eyes the shade of amethyst. If he were honest with himself, Vincent would have caught his attention many years ago. The broad shoulders, gorgeous white hair, high cheekbones, and obvious strength rang all of Justin’s bells. Of course, the idea of Vincent ever having an interest in him caused Justin to snort.

The sound set off the next chain of events, flaming Vincent’s rage even higher, or so Justin figured when Vincent struck harder than before. They circled each other. Vincent took the next chance to slice at Justin, but Justin grabbed his wrist and wrenched him forward and over his shoulder, sending Vincent’s sword across the ground to Kara’s feet with a clatter of metal on the cement. Justin immediately pinned Vincent underneath him. Breathing heavily, Justin sat there atop Vincent for several seconds without a word, trying to catch his breath.

“I don’t want to kill you,” Justin rasped.

Vincent looked up at him in skepticism. “Why?” Vincent demanded.

Justin retained eye contact with him. “Because I don’t like hurting someone who hates those monsters just as much as I do.”

Vincent seemed to contemplate Justin’s words, and then something seemed to click inside Vincent. The fight left his body. Justin became aware of Vincent’s hard body against his, their suggestive position, and what it could have meant in another world. Flushing, Justin stood and held his hand out to Vincent, who studied him for several heartbeats before allowing Justin’s help up from the ground. Justin rushed to Kara’s side to untie her hands and massaged them to bring the feeling back into them.

“Don’t think this means I trust you, wolf,” Vincent growled as he retrieved his sword. “If you even so much as look at a human in the wrong way, I won’t hesitate to kill you.”

The sound of his sword bottoming out in its sheath punctuated his promise.

Kara glanced at him and snapped, “How do we know we can trust you?”

“You don’t.” Without another word, he strode off into the darkness.

J.R. Loveless began her adventure in writing romance at the young age of twelve. Her foray into creating her own worlds and telling her characters’ life stories was triggered by her own love of reading. She currently resides in South Florida with her dog and two cats, volunteers for an animal rescue in her spare time, and works as a manager for a financial lending institute. Someday she hopes to begin writing as a full-time career and bringing more of her ideas to life.

Her journey into gay romance began in 2005 when she began posting her original fiction on a forum for feedback and readers’ pleasure. In 2010, a good friend urged her to submit to a publishing company, and the day she received the acceptance and contract was the best day of her life. Since then, she has been noted to be one of the most purchased audio books after Fifty Shades of Grey on Audiobook.com, received best gay romantic fiction for Touch Me Gently in the 2011 TLA Gaybies, and even received an award for Chasing Seth in 2012.

J.R. adores her fans and loves hearing from them.

Anne Barwell lives in Wellington, New Zealand. She shares her home with a cat with “tortitude” who is convinced that the house is run to suit her; this is an ongoing “discussion,” and to date, it appears as though Kaylee may be winning. In 2008, Anne completed her conjoint BA in English Literature and Music/Bachelor of Teaching. She has worked as a music teacher, a primary school teacher, and now works in a library. She is a member of the Upper Hutt Science Fiction Club and plays violin for Hutt Valley Orchestra. She is an avid reader across a wide range of genres and a watcher of far too many TV series and movies, although it can be argued that there is no such thing as “too many.” These, of course, are best enjoyed with a decent cup of tea and further the continuing argument that the concept of “spare time” is really just a myth. She also hosts and reviews for other authors, and writes monthly blog posts for Love Bytes. She is the co-founder of the New Zealand Rainbow Romance writers, and a member of RWNZ. Anne’s books have received honorable mentions five times, reached the finals four times—one of which was for best gay book—and been a runner up in the Rainbow Awards. She has also been nominated twice in the Goodreads M/M Romance Reader’s Choice Awards—once for Best Fantasy and once for Best Historical. Anne can be found at https://annebarwell.wordpress.com
View all posts by Anne Barwell →
This entry was posted in blog tour, book review, gay book promotions. Bookmark the permalink.