Book Review – Pieces of You by N.R. Walker 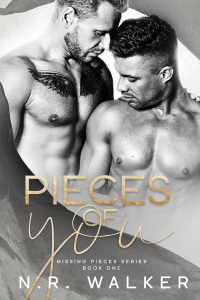 Blurb:
Dallas Muller has everything he never expected he’d have. He owns a successful motorbike mechanic shop in Newcastle, and he’s madly in love with his boyfriend of four years, Justin Keith.

Justin has always struggled to find where he fit in, never realising his true worth or what it means to be loved—until he met Dallas. Living and working together might be too much for some, but Dallas and Justin wouldn’t have it any other way.

When a terrible accident tears their world apart, Justin’s left with no memory of Dallas or their relationship. Trying to put the pieces back together is almost impossible when some pieces are blank and some are missing altogether. Dallas has to let Justin find his own way back to him and just hope that their love will light the way.

N.R. Walker is an author who has been on my ‘must read’ list for quite some time, and now I’m kicking myself for not having read her earlier. Wow. This story yanked me in immediately and I couldn’t put it down to the point that I sat up late reading because I had to finish it in one sitting. It’s beautifully written, emotional, and raw with very real characters.

I loved Justin and Dallas and their story. I loved how Justin’s POV bookended the narrative, and showed the huge difference in him before and after the accident. I felt for Dallas in particular when Justin doesn’t recognise him, and they have to re build everything. So heartbreaking, yet with the glimmer of hope that Dallas clings to, although doesn’t quite always achieve. I loved the scene where it’s revealed what Justin’s dream means. The emotion resonance in this story was fabulous, and felt very real.

I liked the realism in Justin’s injuries after the accident and the struggle he has to regain everything he’s lost. I appreciated that he has a long hard road ahead and that the author didn’t pull any punches in that or make it an easy fix. It’s not just Dallas who is suffering, but Justin. I could feel his frustration and his determination.

I also loved Dav and Sparra. They’re the type of friends we all want and need, and I liked how they provided a little bit of light relief amongst the angst, yet stepped up and more to support Dallas and Justin, and keep the garage going. I thought Justin’s sister was a very strong character, and I liked her role in helping Justin to realise that he has lost memories and he’s not when he thinks he is.

As an added bonus, this story is set in Australia. I love reading stories set in the southern hemisphere. We need more of them!