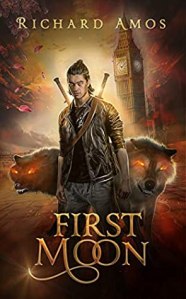 Blurb:
Hunter. Half-werewolf. One hell of a baker.

Need someone, or something, hunted down? Akira Murakami is your man! No target is too small for him to get his energy-sucking blades swinging, and all jobs are welcome at the right price.

The bills have to be paid after all.

Living in a world where the apocalypse almost happened can be complicated, as is being the hybrid son of the High Werewolf of, well, everything. But Akira likes to live a relatively simpler life than dear old papa would like, shunning all the political crap, living by the sword and perfecting that recipe for dark chocolate and raspberry brownies.

To hell with the simple life!

There’s a werewolf killer stalking the city, and Akira is about to be caught in the middle of everything.

Step into an alternative London where the London Underground is above your head, Hyde Park a prison for some creepy shadow creatures, and plenty of baking goes down in a tiny flat on Grays Inn Road.

A kick-ass Urban Fantasy adventure with a slow-burn MM Romance.

I got pulled into this story very quickly. I loved Akira’s narrative style. It’s very informal and fits his character and mindset perfectly. I liked the different feel of this story, with its urban fantasy feel yet AU as well. The world building is fabulous, as are the characters. I liked the take on an alternate London which also feels futuristic in some ways, yet not. I especially liked the different take on werewolves and vampires.

Akira rocks as a character. He’s strong, yet vulnerable, and I love how his default way of coping with stress is baking! I thought him being a werewolf who can’t shift, but has other skills was an interesting mix. Rose and Bob are very cool, and so are Aki’s blades.

I love Gabriel—G—and their slow burn romance. Considering what Akira has been through in the past, it makes a lot of sense that he does the one step forward, two back dance. I’d love to see something, even a short story, from G’s POV at some point. He’s intriguing, and an all round nice guy who clearly has feelings for Akira.

I had to smile at the Banshees that Aki is hunting, and now want revenge. It’s a not so subtle reference to a well known social media thing in our world.

The supporting cast rounds out the world and gives it an added depth. I like that there’s a mix of good and bad guys in this world, and across different species of supernatural. I’m wondering if Aki’s dad is entirely the cold guy Aki thinks he is, or whether that is part unreliable narrator as the story is told from Aki’s POV. On the other hand, I really hope Colin gets what’s coming to him, and more. He’s a total piece of work. And Xavier is all kinds of awesome.

The plot had me guessing and trying to connect the dots and I didn’t see the twist coming. It is very well done, and full of lots of hurt/comfort which always makes me happy.

Be warned that this story isn’t resolved in the first book, but is a series wide arc that will leave you wanting the next book NOW.