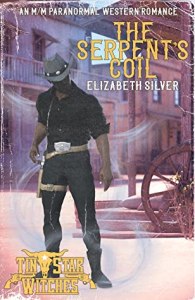 Marcus Rivers knows something is very wrong with the magic around Ruby Gulch. He’s kept his suspicions to himself, but his investigations have gone nowhere. And after months of living rough and fruitless searches, he’s on the verge of giving up. Then the mine owner’s son comes home.

Freshly graduated from the San Francisco University of Magic, William Dolan returns to find the town on edge. Even the land thrums with tension. When he meets Marcus and together they stumble onto the secrets of the mine, Will is going to have decide if he’s able to defy his father. If he’s strong enough to go for what, and who, he knows what’s right.

The differences between the two men are as wide as the desert. Wealth, race, status – despite all this, fate keeps throwing them together again and again. They’re going to have to work together if they’re going to save countless lives. The hard part, however, is going to be figuring out what to do with their hearts if the ruby dust ever settles.

This is a new author to me, and I loved my latest read in this series.

The characters feel very real, and I liked that the author didn’t shy away from the issues of skin colour of the time, and the preconceptions and bigotry associated with it, or the obstacles Will and Marcus face coming from such different backgrounds. I loved Marcus and Will as individual characters, as well as together. They fit so well, not just physically, and in personality, but with their magic too. I enjoyed Will’s journey especially as he starts off quite naive about Marcus’ world, and finds his own place within it.

As with other books in this series, their guardians steal the scenes they’re in, and I loved their interaction with each other too. I liked Will’s brother and his mother especially. She’s a strong woman and I wouldn’t want to get on the wrong side of her. His father is a greedy pretentious bigot, and unfortunately a not so good reflection of the time period.

I love the series set up of the mix of paranormal and western, and the real reason behind the earthquakes in this story. Very clever. I liked the way it was resolved—for now—and the very real consequences for Jimmy along the way. I’d love to see more of these characters, and also find out what happens to Jimmy later. He needs his own HEA once he’s older.