A big welcome to Jocelyn Drake and Rinda Elliott as part of their cover reveal with IndiGo Marketing and Design for Broken Warrior.

The Weaver’s Circle Book One

Cover created by DESIGN BY DRAKE 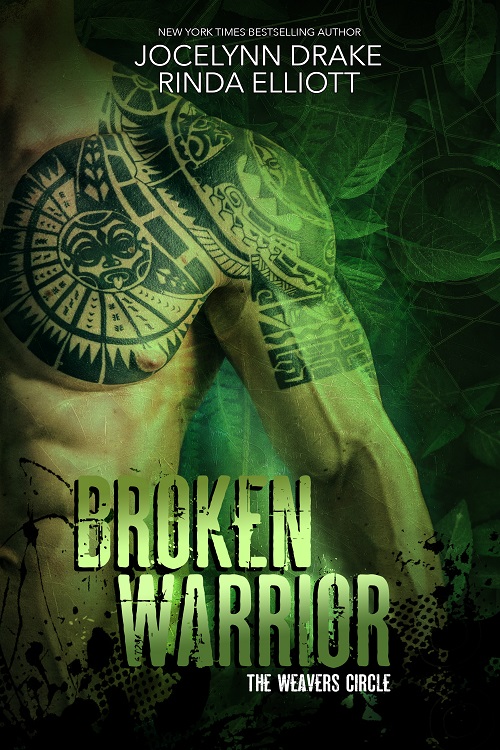 Available to Pre-Order at Amazon

The world has become a strange place.

After a life on the run, Clay Green is rescued by a crazy old lady with a shotgun and an even crazier story about monsters, goddesses, and a secret brotherhood.

Gifted with the power of the earth, Clay must locate his missing “brothers” before invading monsters can destroy everything.

As if that’s not enough to contend with, Clay can’t keep his hands off the man trying to rebuild the plantation house he’s temporarily living in.

Something strange is going on…

Dane knew restoring the old plantation house wasn’t going to be an easy job, but at least none of the clients were going to be underfoot. Since losing his wife and child, the only way Dane can keep going is to focus on the work.

But that focus crumbles the second Clay appears covered in blood and barely hanging on to life.

Mystery and danger cling to Clay and the other men who suddenly show up. A smart man would walk away.

Dane chucks smart out the window in favor of hungry kisses and the silken slide of skin against skin. He doesn’t understand what’s happening, but there’s no question that Clay needs him.

He’s just not sure his heart can survive being broken again if something happens to Clay.

Pre-Order Your Copy on Amazon Today!

Anne Barwell lives in Wellington, New Zealand. She shares her home with a cat with “tortitude” who is convinced that the house is run to suit her; this is an ongoing “discussion,” and to date, it appears as though Kaylee may be winning. In 2008, Anne completed her conjoint BA in English Literature and Music/Bachelor of Teaching. She has worked as a music teacher, a primary school teacher, and now works in a library. She is a member of the Upper Hutt Science Fiction Club and plays violin for Hutt Valley Orchestra. She is an avid reader across a wide range of genres and a watcher of far too many TV series and movies, although it can be argued that there is no such thing as “too many.” These, of course, are best enjoyed with a decent cup of tea and further the continuing argument that the concept of “spare time” is really just a myth. She also hosts and reviews for other authors, and writes monthly blog posts for Love Bytes. She is the co-founder of the New Zealand Rainbow Romance writers, and a member of RWNZ. Anne’s books have received honorable mentions five times, reached the finals four times—one of which was for best gay book—and been a runner up in the Rainbow Awards. She has also been nominated twice in the Goodreads M/M Romance Reader’s Choice Awards—once for Best Fantasy and once for Best Historical. Anne can be found at https://annebarwell.wordpress.com
View all posts by Anne Barwell →
This entry was posted in cover reveal, IndiGo Marketing. Bookmark the permalink.