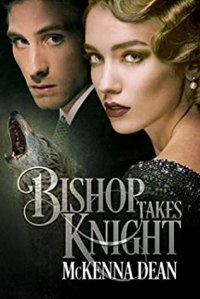 A huge thanks to Silver Dagger Book Tours for the opportunity to read and review!

Blurb:
A gutsy heroine, a reluctant hero, a cute dog… and three rival shifter gangs on the hunt for mysterious artifacts. What could go wrong?

New York, 1955. Former socialite Henrietta (“Rhett”) Bishop, destitute after her father gambles away the family fortune, takes a job at Redclaw Security. But Redclaw is no ordinary operation. Part detective firm and part enforcement agency, Redclaw regulates matters involving the growing population of shifters who have emerged since the onset of the nuclear age.

Peter Knight is a nuclear scientist shattered by the death of his wife. Blacklisted by the government and scientific organizations, he drowns his sorrows while searching for the people behind his wife’s murder.

When Rhett is assigned to recruit Knight, their meeting is more than either bargained for—a rival organization will do anything to secure Knight for themselves. Following a lead to locate a missing cache of alien technology stolen from Redclaw, Rhett is thrown back into her previous glittering life with Knight as her pretend boyfriend. But when a dangerous person from the past turns up to start a bidding war on the artifacts, Bishop and Knight wind up in a fight for their very lives.

I loved the premise of this story, and picked up it after seeing it recommended by a friend. I’m so glad I did! It grabbed me from the first page and kept me hooked until the end. I love the mix of genres, and the tone of the narrative is fabulous, and very much sets the atmosphere of the time. It feels very real, yet tongue in cheek, which is very much at home for the 1950s, with a bit of social commentary thrown in especially in regard to women’s expected place in society.

The characters are interesting and flawed. I liked that although Rhett is kick arse, she makes mistakes and has to prove herself. I really felt for Knight when his past catches up with him. I like him as a character too. The banter between the two is wonderful, and I hope we see more of them.

Ryker is an interesting character and I definitely would like to learn more about him as well, especially his relationship with his half brother. The dog is cute and….wow. What a clever original idea.

The technology is very inventive, and works perfectly alongside the story.

The setup is great, and I like how the world building is introduced a bit at a time as it relates to the story so the reader is trying to figure everything out and everyone’s place in this world at the same time. I loved how atomic energy figured into the appearance of shifters. It works perfectly with the time period, especially with the movies being made at the time. I wasn’t expecting some of the shifters who appeared in this, and one in particular made me very happy. I loved the twist when he got shot, although I was half expecting it. Brilliant!

I highly recommend this story, and can’t wait for more.