A big welcome to W.S. Long as part of his pre-release blitz with Gay Book Promotions for Home Again from JMS Books.

Can resurfaced high school memories lead to forgiveness and a second chance at love?

David Peterson had his whole life charted out for him by his parents. An athletic scholarship to a prestigious college in California and a future in major league baseball were almost certain. But his high school love affair with quarterback Kaden Morris almost changed his predetermined path. When Kaden eventually rejected him, David swore he would never return to Orlando.

Fifteen years later and divorced with a child, David returns home to find a newly divorced Kaden seeking forgiveness. Old feelings resurface, but can the pain of the past be forgotten and a new future together forged?

Kaden changed his shirt again. He sighed and threw the third shirt on the bed. Once he had found out that David Peterson had moved back to Orlando and was living in the same neighborhood that they lived in as kids, he obsessed about running into him. When Sarah texted him and told him she would be at David’s house later and would text him if it was okay to stop by, he’d been nervous all day.

The last time he spoke to David was right before graduation, and he was a dick to David. David hadn’t deserved that.

Thinking about David now depressed him. Maybe David’s father was right, in keeping them apart.

He sighed, sat in the living room, and turned on the TV. He flipped through the channels and couldn’t make up his mind. He continued this way to channel surf and finally wound up watching baseball.

David and baseball, Kaden and football.

Life was so simpler back then. He should’ve never let David out of his life. He hoped Sarah was right and David could forgive him.

David opened the last box as Sarah and Quinn sat in the newly delivered leather sofa and watched a movie on Quinn’s iPad. He checked the air conditioning unit one more time. It didn’t seem to blow a lot of cold air. They were a few days away from heading into the Memorial Day Weekend, and it seemed that Florida was more humid than he remembered.

“Does it feel like we are getting cold air?”

“I had them check the air conditioning unit before you guys flew.” Sarah glanced up from the couch to talk to David. “They said everything checked out. Actually, now that I think about it, it was like a day before you go here the A/C guys were here.

“Papa, when are we getting wi-fi? I want to watch a Disney Junior show, and my Star Wars cartoons.”

“They’ll be here to install cable and wi-fi in two days.”

“Should I order pizza or Chinese?” Sarah asked.

He hoped the movers would arrive on time because they only had a limited amount of clothes.

“Oh, come on, the owners of the old restaurant we loved in ViMi have a new place now, and it’s so good. You can have leftovers from whatever we don’t eat! What about you Quinn, are you hungry?”

“He’s always hungry. He’ll eat a little but ask me to finish the rest. This is why I have a middle-aged spread.”

Sarah laughed. “You’re not middle-aged, and you don’t have a gut.”

David pinched his soft love handles. “Remind me to have your eyes checked. I really need to go back to yoga.”

Sarah glanced back at David who stood near the kitchen. He shook his head and signaled to Sarah to drop it. Sarah shrugged.

“Daddy had a friend over when Papa went to yoga.”

David’s face flushed from embarrassment. He hadn’t expected Quinn, who’d been reluctant to tell David that he caught Jason kissing another man, to suddenly turn in to someone who wanted to tell everything. Even if that someone was Sarah.

“But if Papa goes to yoga, then Daddy will have a new friend visit.”

David didn’t know whether to laugh or cry at this. His son equated Jason’s cheating with his other father going to yoga.

David moved into the living room and sat next to Quinn.

Sarah stood up. “I’m going to order some Chinese food. I’ll be right back.”

“Quinn, son,” David paused. “Your father … your daddy and I will never be getting back together. You remember we talked about this at the pool, right? We cannot live together anymore. I hope one day you will understand. But it is something your Daddy has agreed to, I agreed to, and hopefully you will one day be okay with it.”

Quinn straightened himself on the couch, then threw the iPad in his hand on the seat cushion next to him. Without saying anything, Quinn got up and ran upstairs.

“I think he’s upset. I thought he was okay yesterday when we were at the pool.”

The doorbell rang, and David stood up to answer the door. “Wow, that was quick for Chinese. Did you order it before you got here or something?” When David opened the door, Kaden stood behind the screen door, holding a basket of edible fruit, some dipped in chocolate, sealed in cellophane.

Kaden appeared the same as he did in high school except his blond hair was a little darker, and his muscular chest stood out more. It was like he was still working at the mall at Abercrombie and Fitch.

“Sarah said you just moved in. I moved back about a month ago.”

“Hi, Kaden!” Sarah had moved in so close she practically was shouting in David’s ear.

“I brought you a welcome gift.”

“Thanks,” David said matter-of-factly as he opened the screen door and accepted the arrangement. He debated a millisecond on what to do. “I’m sorry, Kaden, this is a really bad time. My kid, my son, is not happy about being here and I have to check up on him.”

Before Kaden responded, David retreated into the house leaving Sarah behind with Kaden, who stood open-mouthed. 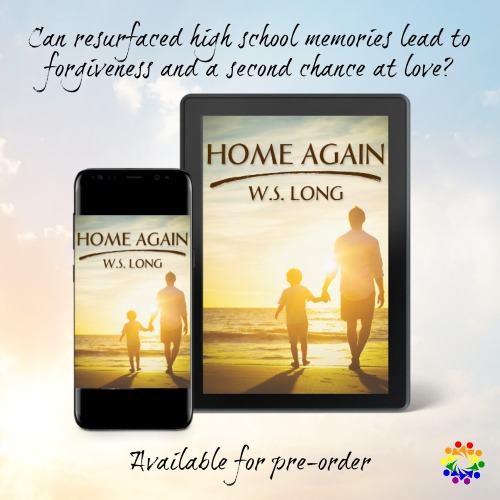 Immigrant, military-brat, gay veteran, and former theme park employee, among other things, W.S. Long upon leaving the military became a lawyer. During the day, he practices law but at night he reads and writes male-male romance under this pen name. Once in a while W.S. Long travels or dreams about traveling to wonderful places with his wonderful husband, a mild-mannered college professor.

Anne Barwell lives in Wellington, New Zealand. She shares her home with a cat with “tortitude” who is convinced that the house is run to suit her; this is an ongoing “discussion,” and to date, it appears as though Kaylee may be winning. In 2008, Anne completed her conjoint BA in English Literature and Music/Bachelor of Teaching. She has worked as a music teacher, a primary school teacher, and now works in a library. She is a member of the Upper Hutt Science Fiction Club and plays violin for Hutt Valley Orchestra. She is an avid reader across a wide range of genres and a watcher of far too many TV series and movies, although it can be argued that there is no such thing as “too many.” These, of course, are best enjoyed with a decent cup of tea and further the continuing argument that the concept of “spare time” is really just a myth. She also hosts and reviews for other authors, and writes monthly blog posts for Love Bytes. She is the co-founder of the New Zealand Rainbow Romance writers, and a member of RWNZ. Anne’s books have received honorable mentions five times, reached the finals four times—one of which was for best gay book—and been a runner up in the Rainbow Awards. She has also been nominated twice in the Goodreads M/M Romance Reader’s Choice Awards—once for Best Fantasy and once for Best Historical. Anne can be found at https://annebarwell.wordpress.com
View all posts by Anne Barwell →
This entry was posted in book blitz, gay book promotions, jms books. Bookmark the permalink.