A big welcome to Nell Iris as part of her release blitz with Gay Book Promotions for Late Night Poetry from JMS Books. 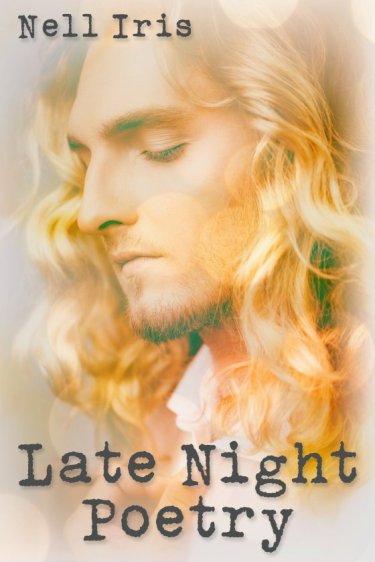 Saying “I love you” to someone who says it first, isn’t supposed to lead to a break-up, but that’s what happens to Sully and Lou. Sully is out and proud while Lou is in the closet, so when their relationship deepens, Lou runs.

Can old love poems and heartbreaking honesty help Sully and Lou find their way back to each other?

“Ron set me up on a date.”—thick, revolted grunt—”A fucking date. He and Kelly told me to come over for dinner but neglected to tell me they had also invited one of her single female friends. Fuck him. I told him I was trying to get over someone and then he does this? I asked him why and he said, ‘I’m your brother, I’m just looking out for you and besides you need to get back into the saddle again.’ The saddle, Sully, like I’m some fucking cowboy or something.”—Deep stuttering breath—“I felt so betrayed. A few days ago, he asked me why I was so mopey, and I told him I’d just broken up with someone really important and that I’m very upset about it. He said he was sorry and then a few days later he tells me to get back on the horse? I couldn’t even storm out of there because he grabbed my arm and said Kelly had worked so hard on the dinner, so I better not disappoint her. He’s definitely inherited his guilt-trip skills from Mom.

“Then I had to spend the rest of the night dodging wandering hands. I can’t tell you how many times I had to brush her fingers away from my thigh. As soon as I could, I got up and left but then she followed me. She cornered me before I could get into my car and kissed me. I felt like I cheated on you. I cheated on you and all I want to do is beg your forgiveness and promise you I won’t do it again. Except it doesn’t matter, does it? I did this to myself. I did this to myself and now I have to live with my choices. With the consequences of my cowardice.

“And you probably don’t care anymore and you’re right not to because you deserve someone by your side who’ll be happy to be seen with you. Someone who’ll stand up to his family and tell them that the person he’s so broken-hearted over is a guy. The most amazing guy I’ve ever met who made me laugh every day and saw behind the tough-guy persona and saw the real me.

I don’t sleep well that night. It’s one of my few weekends off; I relented and took time off from the bar on the weekend after yet another call from Dad telling me in his sternest voice to not work myself to the bone. I spent the evening conked out on the couch, half-sleeping to a movie I’d seen before, and after that, I moved the party to the bed to get some actual sleep. But Lou’s phone call woke me up, and after listening to his message my sleep is restless.

I dream of his large hands touching every inch of my body. Of his thin but warm lips constantly surrounded by stubble because he needs to shave twice a day to keep his face smooth. Of his long hair hanging like curtains around us as he lay on top of me, kissing me. Of his fingers playing with my curls that he loves so much or tracing the outline of my tattoo.

I dream of long legs entwined with mine and the hard planes of his body rubbing against mine. Of deep moans in my ear, of fingers digging into my flesh, of sweat dripping down on me as he made love with me. I dream of his scent. His deep laughter. How his eyes softened whenever he looked at me.

Caught in the space between dream and consciousness, I dream of…remember?…the time he crawled into my bed late at night, snaking his arm around my waist and pulling me flush to his body, pressing his broad chest against my back, rubbing the curly hair covering his pecs against my bed-warmed skin. I was aware of his presence but not quite awake as he carefully caressed the skin under my belly button with a thick thumb. I dream of…remember?…the softly whispered words against the back of my neck. “I love you, Sully Winslow.” 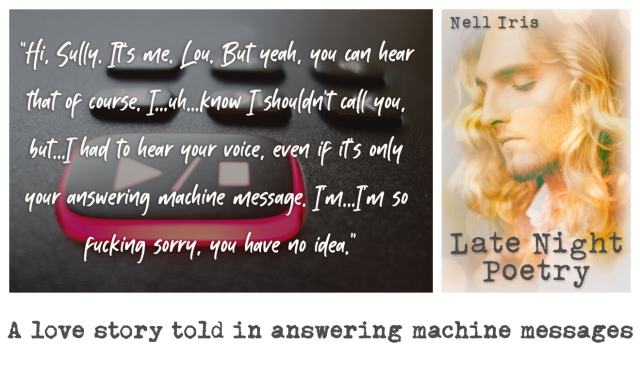 Nell Iris is a romantic at heart who believes everyone deserves a happy ending. She’s a bona fide bookworm (learned to read long before she started school), wouldn’t dream of going anywhere without something to read (not even the ladies room), loves music (and singing along at the top of her voice but she’s no Celine Dion), and is a real Star Trek nerd (Make it so). She loves words, bullet journals, poetry, wine, coffee-flavored kisses, and fika (a Swedish cultural thing involving coffee and pastry!)

Nell believes passionately in equality for all regardless of race, gender or sexuality, and wants to make the world a better, less hateful, place.

Nell is a bisexual Swedish woman married to the love of her life, a proud mama of a grown daughter, and is approaching 50 faster than she’d like. She lives in the south of Sweden where she spends her days thinking up stories about people falling in love. After dreaming about being a writer for most of her life, she finally was in a place where she could pursue her dream and released her first book in 2017.

Anne Barwell lives in Wellington, New Zealand. She shares her home with a cat with “tortitude” who is convinced that the house is run to suit her; this is an ongoing “discussion,” and to date, it appears as though Kaylee may be winning. In 2008, Anne completed her conjoint BA in English Literature and Music/Bachelor of Teaching. She has worked as a music teacher, a primary school teacher, and now works in a library. She is a member of the Upper Hutt Science Fiction Club and plays violin for Hutt Valley Orchestra. She is an avid reader across a wide range of genres and a watcher of far too many TV series and movies, although it can be argued that there is no such thing as “too many.” These, of course, are best enjoyed with a decent cup of tea and further the continuing argument that the concept of “spare time” is really just a myth. She also hosts and reviews for other authors, and writes monthly blog posts for Love Bytes. She is the co-founder of the New Zealand Rainbow Romance writers, and a member of RWNZ. Anne’s books have received honorable mentions five times, reached the finals four times—one of which was for best gay book—and been a runner up in the Rainbow Awards. She has also been nominated twice in the Goodreads M/M Romance Reader’s Choice Awards—once for Best Fantasy and once for Best Historical. Anne can be found at https://annebarwell.wordpress.com
View all posts by Anne Barwell →
This entry was posted in gay book promotions, jms books, release blitz. Bookmark the permalink.