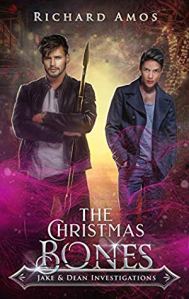 Balancing family life with being a kick-ass investigator is hard, especially when the holidays roll up.

Jake Winter and Dean Tseng are solving cases as PIAs (Paranormal Investigation Agents) in Amsterdam, as well as being fathers to their four-year-old daughter. With the festive season in full swing, everything should be calming down to make way for relaxing times with good food and presents delivered by Sinterklaas.
Right?

Since when was life ever that simple?

When a human body is discovered with every one of its bones missing, and creepy anti-supernatural protesters start lurking in the shadows with a sinister agenda, Jake and Dean are about to experience the nasty side of Christmas.

An Urban Fantasy filled with magic, mystery and mayhem

(The Christmas Bones is a sequel novel to the Coldharbour Chronicles series, set four years after the events of the final book. There are references to the previous series, but this story can be enjoyed without having prior knowledge of those books. It features an established MM relationship, and plenty of Urban Fantasy action.)

I haven’t read the Coldharbour Chronicles but although there were references to that with left me wanting to read that series, I still followed this story no problem, and it didn’t detract from my enjoyment of The Christmas Bones. Although I do want more in this series now too, and loved the set up for the next book.

The story drops the reader straight into the action, and I liked how the backstory was explained without it feeling like an info dump.

I fell for the characters very quickly. Their relationship feels very real, as does the life they’ve made with their daughter, Louise. Some of the scenes with them and Louise are very cute, while others are very much the realism of parenting while having to sometimes put the job first, especially when lives are at stake. Jake is wonderfully snarky, and I thought Dean complemented him well, although he has his own inner demons to fight. I loved their banter. I liked that they are both flawed, and not heroes in a conventional way, yet someone I’d definitely want on my side during an investigation or a fight. I liked that they’re still working through the consequences of their pasts.

I liked the supporting cast too, and am looking forwarding to learning more about them in future books. The Conclave are a real piece of work and sadly their attitudes and beliefs remind me of some of the not so good things about our own world.

I loved that this story is set in Amsterdam, and the flavour of culture and snippets of language. It gave the storyline a different flavour from what I usually read, despite it being our world, yet not, and also a very strong sense of place. The world building is fabulous, and I liked the idea of the pods and the havoc they’re wrecking not only on people, but their surroundings as well. I loved the supernatural elements in the story, the different types of beings and magic, and how some technology still works in this world, yet not others. The pods are a very cool idea, as is that Gaelic is the original language of the fae. I also liked that humans and supernaturals are a mix of good and bad.

I thought the story was very clever, and I didn’t guess the real reason for ‘the Christmas bones’. As a side note, I always appreciate stories where the characters have to do research, and I liked the set up with the research tools available in this world.

I’d recommend this story to readers who enjoy urban fantasy with fabulous world building, flawed heroes, and a storyline that keeps you guessing. 5 of out 5.