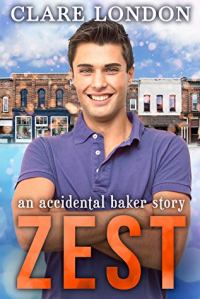 Blurb:
Donnie’s new romance with silver fox veterinarian Will looks like a real recipe for love. But first he has to deal with the problems of his job, his friends’ demands, and worries about Will’s privileged background. To say nothing of Donnie’s thwarted dreams of a catering career—and baking something that doesn’t come out a disaster.

Will is fascinated and entranced by Donnie. A mature, professional businessman, he’s far less confident in romance—and in the bedroom. Yet his eagerness to look after Donnie and show him a better life are misguided, and have a disastrous effect of their own.

Donnie is everyone’s friend. He’ll help anyone out. But who’s there to help him when he needs it?

Read about Donnie and Will’s first meeting in The Accidental Baker – and the other couples whose stories will follow in this series.

I enjoyed reading about Donnie and Will in The Accidental Baker so was very pleased that they have their own story! There is a brief recap of their first meeting in this, but it’s written so it doesn’t feel repetitive if you’ve already read it. I also enjoyed seeing other characters from that story, and revisiting them as now established couples. It was like catching up with old friends. I had a particular soft spot for Simon in this one when he comes to Donnie’s rescue.

I thought this was a very sweet story with flawed characters who are their own worst enemies. I found Donnie very easy to relate to. He’s a nice guy who goes out of his way to help people, and thought the situation of everyone taking that for granted and reacting negatively when he finally says no, very realistic. I felt his frustration, and Will’s who tries so hard to be who Donnie needs that it all backfires. I enjoy stories with characters who are opposites yet find common ground to build a friendship, romance, and more. I thought it was a nice flip with having Will the one who is less experienced, with romance as well as people, as he’s the older man in the relationship.

This story also has a fabulous sense of community being family. I loved the way everyone rallied around each other. It left me with a nice fuzzy feeling.

I’d recommend it to readers who enjoy reading sweet, low angst stories with likeable characters and a lovely sense of family. 5 out of 5 stars.