Authors attending the Gay Lit Romance Retreat have put together a LGBT Romance Giveaway. A huge thanks to Gay Book Promotions for the opportunity to post about it. 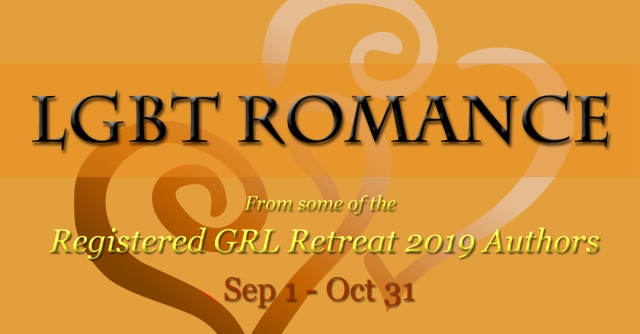 If you love gay romance, you’ve come to the right place!

What kind of stories? All the good stuff! Contemporary, Historical, Paranormal, Sizzling, Sweet, Comedy, Kink, Shifter, MPREG, Suspense, Action/Adventure and more—it’s all in the “LGBT Romance—From Some of the Registered GRL Retreat 2019 Authors” Prolific Works giveaway FREE during September and October. Over 50 scrumptious short stories, novellas, books, and previews/excerpts, from some of the bestselling authors in the genre.

These stories are written by some of the Featured and Registered authors attending the Gay Romantic Lit. (GRL) Retreat, the must-attend event for people who create and celebrate LGBTQ romance.

The giveaway runs from September 1 to October 31. And it’s all FREE!

CHECK OUT THE GIVEAWAY HERE

“Prolific Works has a big romance audience, so this is a great giveaway for readers who won’t be at the GRL Retreat to find new favorites and new authors,” says MM romance author Morgan Brice, who coordinated the Prolific Works giveaway. “We also wanted people who are coming to GRL to have the chance to enjoy stories by favorite authors and maybe discover new authors prior to the retreat, so they could have fun meeting the authors and talking about the books at the event.”

While all of the authors with stories in the giveaway will be attending the GRL Retreat 2019 as Featured or Registered Authors, there are additional authors who were unable to participate. For a full list of GRL 2019 authors, please check www.gayromlit.com The author list above was compiled on 8/27. Unforeseen events may cause changes. See the Prolific Works giveaway for the final list of giveaway authors.

Anne Barwell lives in Wellington, New Zealand. She shares her home with a cat with “tortitude” who is convinced that the house is run to suit her; this is an ongoing “discussion,” and to date, it appears as though Kaylee may be winning. In 2008, Anne completed her conjoint BA in English Literature and Music/Bachelor of Teaching. She has worked as a music teacher, a primary school teacher, and now works in a library. She is a member of the Upper Hutt Science Fiction Club and plays violin for Hutt Valley Orchestra. She is an avid reader across a wide range of genres and a watcher of far too many TV series and movies, although it can be argued that there is no such thing as “too many.” These, of course, are best enjoyed with a decent cup of tea and further the continuing argument that the concept of “spare time” is really just a myth. She also hosts and reviews for other authors, and writes monthly blog posts for Love Bytes. She is the co-founder of the New Zealand Rainbow Romance writers, and a member of RWNZ. Anne’s books have received honorable mentions five times, reached the finals four times—one of which was for best gay book—and been a runner up in the Rainbow Awards. She has also been nominated twice in the Goodreads M/M Romance Reader’s Choice Awards—once for Best Fantasy and once for Best Historical. Anne can be found at https://annebarwell.wordpress.com
View all posts by Anne Barwell →
This entry was posted in gay book promotions, giveaway. Bookmark the permalink.