Him Improvement by Tanya Chris

A big welcome to Tanya Chris as part of her blog tour with Gay Book Promotions for Him Improvement from Dreamspinner Press. 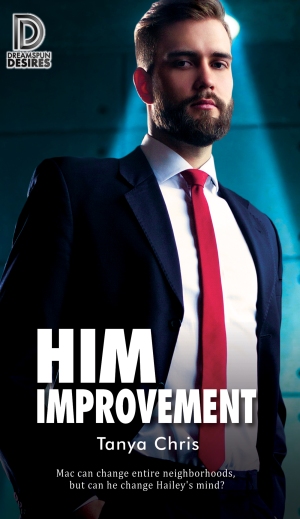 The course of true love runs through every neighborhood….

Only one thing stands between Gregory MacPherson II and his dream revitalization project for the gritty neighborhood of Ball’s End: a rinky-dink, run-down used bookstore called Hailey’s Comic. But when master negotiator Mac shows up to make a deal with the owner, he comes face-to-face with quirky, colorful Hailey—unexpectedly good-humored about Mac’s attempted eviction and, also unexpectedly, a hot guy.

Hailey won’t give up his lease, no matter how much money Mac offers. When it comes to consummating their mutual attraction, though, he’s a lot more flexible. Soon Mac has as hard a time prying himself out of Hailey’s bed as he does prying Hailey out of the building. But Hailey doubts Mac’s plans serve Ball’s End’s best interests, and he insists Mac give him a chance to prove his case. If they’re going to build a happy ever after, one of them will have to be remade…. 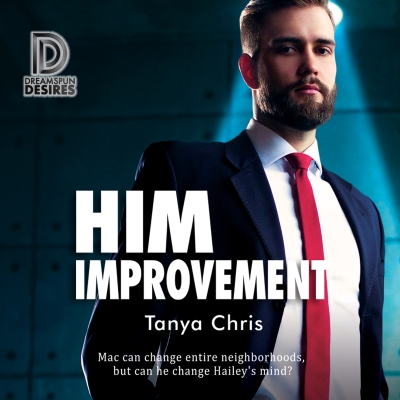 GREGORY MacPherson II didn’t have the time or the patience to make a personal trip to a bookstore, but here he was. Alone.

No patrons roamed the narrow aisles formed byoverstuffed bookshelves. No clerk waited at the vintagecash register sitting on top of a linoleum-covered counter barely capable of holding its weight. No one rushed to greet him from behind the tawdry multicolored curtain hanging at the back of the store.

From where he stood only a few feet inside the doorway, leery of allowing anything in the dusty hodgepodge to brush against his suit, he could see straight down the center aisle all the way to the back of the store. It was a thirty- foot-by-sixty-foot shoebox, longer than it was wide, oneof four retail spaces on the ground floor of the six-story brick building and the only one still open. Which was whyGregory MacPherson II, commonly referred to as Mac, had personally dragged himself down here.

How the place could stay in business without any workers, never mind customers, was a mystery he didn’t intend to solve. He was there to shut the place down, not rescue it, though in the few short minutes he’d been exposed to Hailey’s Comic, he could already list a half-dozen ways to improve its profitability.

That sign out front, for instance. It was a purple whirlwind of planets, well done if you were going for an acid-trip vibe, but the name implied there’d be comics, and the sign implied there’d be comets. Or drugs. And from what he could see, there were neither. If an establishment wanted to bring in customers, it needed to make clear theservices it provided and establish confidence that it wouldprovide them well.

Then there was the matter of actually waiting on the customers you did bring in. A bell had tinkled as he’d entered, but apparently only for its own enjoyment.

“Hello?” He raised his voice to a level that couldn’t be ignored and had a brief moment to wonder if he really was completely alone before a head and a hand appeared around the edge of the curtain.

“Mercy, you scared me,” the head said. It belonged to a young man and had a mop of brown hair piled on top of it, a few shades lighter than Mac’s own reddish brown.“Sorry, I didn’t hear the bell. Give me a minute. I’m sort of in flagrante delicto.” The head disappeared.

“In flagrante delicto doesn’t mean naked, you know,” Mac told the air where the head had been. “It means you were caught doing something you shouldn’t have been.Something sexual.”

“What can I help you with?” He was in his midtwenties,so perhaps ten years younger than Mac, dressed in jeans laddered with intentional rips, each the same two inches wide, running down his thighs like claw marks. His face was clean-shaven, fresh with his youth, and Mac wondered how his skin would react to having Mac’s tightly trimmed beard rubbed all over it.

“You’re free to browse around, even if I’m not out here.”

Mac added lax security to the mental list he was pointlessly compiling. “I need to speak to the owner.”

Hailey Green, owner of Hailey’s Comic, was the only thing standing in the way of his plans to revitalize this misbegotten section of Ballhaven, which plan started with this very brick building and would ultimately lead to Ball’s End—as everyone called it; he’d have to do something about the branding—becoming the newest hot spot for millennials to eat, drink, shop, and live. Urban revitalization was Mac’s business, and Hailey Green was Mac’s problem.

“Still me,” the man said, tilting his head to the side asif to take in Mac’s appearance more carefully.

Mac hadn’t changed clothes before driving down to Ball’s End, though he could’ve guessed the place would bedirty. He’d been reading a report on the effort to clear 502 Main Street of its tenants and had made an abrupt decisionto come down and take care of ridding the building of its final holdout himself. 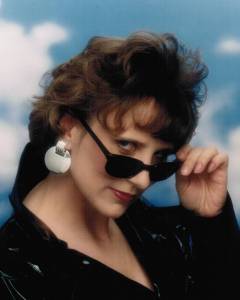 Tanya Chris writes feminist-friendly romance in a variety of sub-genres and pairings–most especially M/M. Born on the West Coast and raised on the East Coast, she’s fact-based but thirsty for justice, and her books often include an examination of a current social issue, even when they’re set in the past. As a lifelong genre-hopping reader herself, she admires character-driven work with a message, regardless of the form it takes.

Tanya is an avid rock climber, a long-distance runner, and a participant in her local community theater where she has tackled most roles, including playwright, actor, director, producer, and stage manager. Her travels, both for climbing trips and for cultural exploration, have brought her to places as fascinating as Egypt and as beautiful as the Dolomites, though there’s no place like home. 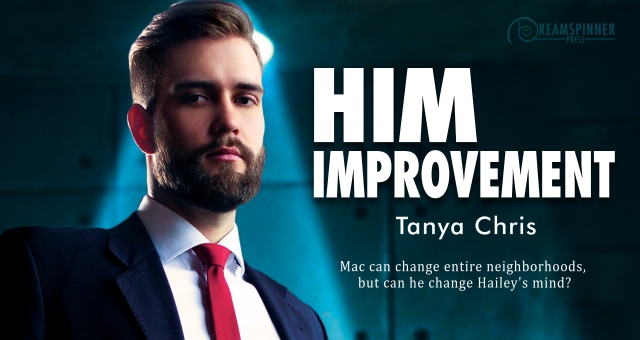 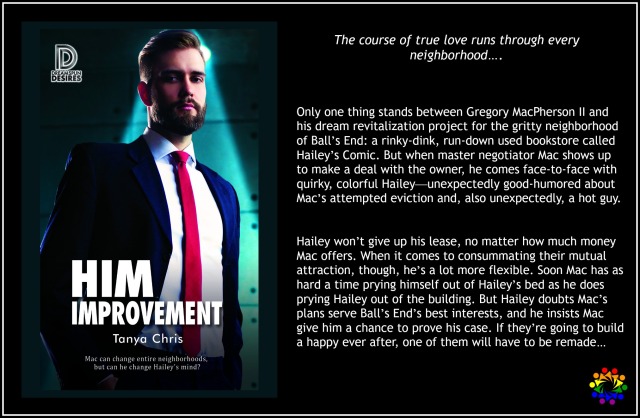 Anne Barwell lives in Wellington, New Zealand. She shares her home with a cat with “tortitude” who is convinced that the house is run to suit her; this is an ongoing “discussion,” and to date, it appears as though Kaylee may be winning. In 2008, Anne completed her conjoint BA in English Literature and Music/Bachelor of Teaching. She has worked as a music teacher, a primary school teacher, and now works in a library. She is a member of the Upper Hutt Science Fiction Club and plays violin for Hutt Valley Orchestra. She is an avid reader across a wide range of genres and a watcher of far too many TV series and movies, although it can be argued that there is no such thing as “too many.” These, of course, are best enjoyed with a decent cup of tea and further the continuing argument that the concept of “spare time” is really just a myth. She also hosts and reviews for other authors, and writes monthly blog posts for Love Bytes. She is the co-founder of the New Zealand Rainbow Romance writers, and a member of RWNZ. Anne’s books have received honorable mentions five times, reached the finals four times—one of which was for best gay book—and been a runner up in the Rainbow Awards. She has also been nominated twice in the Goodreads M/M Romance Reader’s Choice Awards—once for Best Fantasy and once for Best Historical. Anne can be found at https://annebarwell.wordpress.com
View all posts by Anne Barwell →
This entry was posted in dreamspinner press, gay book promotions, release blitz. Bookmark the permalink.