A big welcome to RJ Scott as part of her review tour with Signal Boost Promotions for Today.

I loved the first book in this series, and book two didn’t disappoint. I already liked Eric after meeting him in book one, and enjoyed finding out more about him in this story. I thought the author handled Brady’s DCD (developmental coordination disorder) with sensitivity, and I felt for him as he lived with it, and his constant battle to not let it get in the way of being a dad to Maddy and Lucas.

The characterisations were brilliant, and came across as very real, which is something I always know I’m going to get in a book from this author. I thought Maddy and Lucas felt realistic for their age, especially in Lucas’ case with how obnoxious twelve-year-olds can be, yet sweet and protective too.

I loved how Eric and Brady are able to both help each other deal with their issues, as it puts them on an equal footing within their relationship. I also liked how Eric asks Brady intelligent questions, wants to understand his DCD, rather than being put off by it, and is up front that he wants a relationship.

The supporting cast was great. I enjoyed catching up with Ash, Sean, Leo, Adam, and Mia from Single, and meeting new characters. I particularly liked Spencer, who is a very good friend to Brady. I liked how he takes Brady as he is, with no judgement, and encourages him to follow his heart.

I liked Jason as soon as he showed up, so am very happy that the next book in the series is his and Leo’s.

I’d recommend Today to readers who enjoy contemporary romance with well developed likeable characters, a great supporting cast, and a story that keeps you turning pages. 5 out of 5 stars.

When the world labels a man and judges them blindly, is it possible to ever find love?

Firefighter Eric is on the front line, battling the threat of nature’s destruction in the California grasslands alongside his CalFire team. Focused and calm, even in the direst of situations, he has a strong affection for his fire truck, loves his career, and has best friends he can rely on. All he needs now is love, but that seems to be impossible to find. At his friend’s wedding. Eric falls in lust at first sight with the shy, slim and sexy Brady, even if Brady isn’t the type of guy he usually goes for. What Eric longs for is an equal in his bed, not a smaller guy who might want Eric to role-play big strong firefighter every time they have sex. He wants to find someone he can be vulnerable with, someone who will love him for his soft heart and quiet ways.

Brady’s life plans grind to a halt when his niece and nephew lose their parents in a tragic accident, and he becomes a dad overnight. His Developmental Coordination Disorder rules his life, but he fights both DCD and the fears that chase him every day, to give Maddie and Lucas a home. Agreeing to go to a friend’s wedding is a decision he regrets long before he even gets there. But, he refuses to give in to his fear, even if he might do something that makes him a target for people’s comments and laughter. Meeting Eric, a huge man with a gentle voice and a flair for chivalry, he falls hard. Now, if only he can let himself get past his panic that Eric would never want someone like him, then maybe he could fall in love for real. 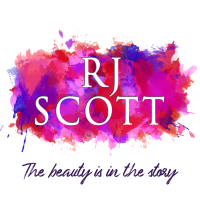 USA Today bestselling author RJ Scott writes stories with a heart of romance, a troubled road to reach happiness, and most importantly, a happily ever after.

RJ Scott is the author of over one hundred romance books, writing emotional stories of complicated characters, cowboys, millionaire, princes, and the men who get mixed up in their lives. RJ is known for writing books that always end with a happy ever after. She lives just outside London and spends every waking minute she isn’t with family either reading or writing.

The last time she had a week’s break from writing she didn’t like it one little bit, and she has yet to meet a bottle of wine she couldn’t defeat.

She’s always thrilled to hear from readers, bloggers and other writers. Please contact via the links below:

Anne Barwell lives in Wellington, New Zealand. She shares her home with a cat with “tortitude” who is convinced that the house is run to suit her; this is an ongoing “discussion,” and to date, it appears as though Kaylee may be winning. In 2008, Anne completed her conjoint BA in English Literature and Music/Bachelor of Teaching. She has worked as a music teacher, a primary school teacher, and now works in a library. She is a member of the Upper Hutt Science Fiction Club and plays violin for Hutt Valley Orchestra. She is an avid reader across a wide range of genres and a watcher of far too many TV series and movies, although it can be argued that there is no such thing as “too many.” These, of course, are best enjoyed with a decent cup of tea and further the continuing argument that the concept of “spare time” is really just a myth. She also hosts and reviews for other authors, and writes monthly blog posts for Love Bytes. She is the co-founder of the New Zealand Rainbow Romance writers, and a member of RWNZ. Anne’s books have received honorable mentions five times, reached the finals four times—one of which was for best gay book—and been a runner up in the Rainbow Awards. She has also been nominated twice in the Goodreads M/M Romance Reader’s Choice Awards—once for Best Fantasy and once for Best Historical. Anne can be found at https://annebarwell.wordpress.com
View all posts by Anne Barwell →
This entry was posted in blog tour, book review, signal boost promotions. Bookmark the permalink.