A big welcome to Brooklyn Ray as part of her release blitz with IndiGo Marketing and Design for Predatory from NineStar Press.

Donovan Quinn is faced with the impossible: unleashing the wild energy inside him. In the aftermath of a rushed, thoughtless sacrifice, his circle mates brainstorm a plan to appease the Queen of Water. Meanwhile, Donovan desperately tries to find a way to access the lonely Earth magic hiding inside him.

But with his heart reaching for Tyler, the aggressive and volatile head witch of his circle, and friendships being tested at every turn, Donovan is at a standstill with his magic. Saving his friends, his circle, and his heart becomes far more complicated than he ever thought.

If you would’ve asked Donovan Quinn where he might be this time last year, he would’ve had a perfectly executed answer. Something standard and palatable. He would’ve batted his lashes and shrugged, hinted at finishing his degree and landing a good job. That was what people wanted to hear—his mother, the clan leaders, his family and circle-mates. He would’ve lied, and they would’ve smiled, and he would’ve swallowed the truth.

Because Donovan didn’t care about a degree or a good job. He wasn’t worried about appearances or being a good witch. If you’d asked him, he would’ve said, “I’m sure I’ll be keeping busy.”

Donovan never expected to trade those lies for this truth: being in the passenger’s seat of Tyler’s Jeep on the night Liam committed murder.

The sound of the windshield wipers made the silence between them seem like a chasm. They’d dropped Christy off at home after a twenty-minute argument over rights and wrongs, secrets and consequences. Christy had burst into tears and told Tyler his cruelty didn’t count for strength, and when he’d refused to look at her or speak to her, she’d climbed out of the car and slammed the door for good measure.

Now they were parked somewhere in the middle of the woods. The headlights were turned off, rain pelted the roof, and Donovan wasn’t sure if this was the end of something—their circle, their magic, whatever festered between them. It’d been three months and they still didn’t have a name for it. Relationship didn’t fit. Friends with benefits was too watered down.

Whatever it was, it had been born out of Tyler’s anger. His possessiveness and desire. Three months ago, Donovan had taken Tyler to a club to unwind. We’ll find different people. Just have fun for a night. And Tyler had agreed. But as the night went on, liquor and stolen glances turned desire into something else. Donovan had met Tyler’s eyes as a handsome man covered in tattoos licked salt from his neck. Tyler had shoved himself between them and pulled Donovan onto the dancefloor.

Everything changed after that. Everything had kept changing since then.

“You have anything to say?” Tyler asked.

Donovan followed the straight line of Tyler’s nose to his thin, set mouth. He rested his elbow on the top of the door, hand splayed over his jaw. He was typically handsome—black hair kept neat and slicked back, ears pierced with plain silver hoops, skin never inked. His black turtleneck covered a barely there bruise left behind from Donovan’s mouth. Sometimes he glamoured hickeys. Other times he covered them with foundation, like he did the bruises he brought back from fights with his father.

It was difficult to separate who Tyler was from who his family expected him to be. Because Donovan had seen Tyler gentle and everyone else only knew him as a Li.

“They’re our friends,” Donovan said. He picked at the chipped nail polish on his thumb. “We can’t just exile them. We took an oath.”

“They’ve been using dark magic behind our backs, that’s enough to break the damn oath. Not to mention Liam murdered someone tonight and we’ve got demons knocking on our door.”

“We can’t leave them.” Donovan watched Tyler’s jaw flex. He almost brushed his fingers over Tyler’s thigh, but hesitated, unsure if touch could be casual between them or not. “I won’t leave them.”

“Aren’t leopards solitary?” Tyler’s sarcasm was a mean deflection, but it cut Donovan to the bone.

Liam had murdered someone and because of it, the Queen of Water had walked from the sea and put Donovan’s secret on display like it was nothing. Leopard. He’d rarely used the term, even in his own home, and now it fit in Tyler’s mouth like a curse.

“That isn’t fair,” Donovan whispered. He squirmed in place and pulled at the bottom of his shirt, picking at threads, giving his nerves a place to go. He glanced out of the window and watched rain streak through tree branches. The forest was alive around them. “Don’t take your elitist bullshit out on me, Tyler.”

“You didn’t tell me,” Tyler said softly, then louder. “You didn’t even tell me.”

The silence was no longer a chasm. It was too close, too personal, and it made Donovan’s lungs ache. His mouth tightened and he turned away, fighting the urge to shout or cry or argue or explain. He didn’t think Tyler cared for his explanations. He didn’t know if Tyler cared for anything at all.

Tyler glanced at him, rolled his eyes, and flicked on the headlights. They didn’t speak for the duration of the trip. Tyler’s gaze flicked toward him while they idled at a stoplight and Donovan hoped he’d say something. Anything. But he didn’t.

The duplex Donovan and his mother lived in was outside downtown, nestled between a gated community and a shopping plaza. There was a whole neighborhood of attached houses painted in different shades of mauve. Donovan’s house was the one with the darkest paint and a yellow door, the last one on the left. Tyler put the car in park and heaved a sigh. Donovan waited for an apology or a question, for something other than silence, but Tyler didn’t say a word.

Fuck him. He slammed the door harder than Christy had and walked inside without looking back. His mom worked the night shift at the hospital, but she’d left a box of macaroni and cheese on the counter. His familiar, a serval cat named Melody, sat on the back of the couch. She looked wild despite how domestic she truly was.

“Why do I always date dickheads?” Donovan asked. Not that he was dating Tyler. Not even close. But still. He narrowed his eyes at Melody and she yawned.

Dickhead was putting it lightly. Tyler was the head witch of their circle, seven years older than him. He had anger issues. He’d never uttered the words commitment or relationship. He was possessive and jealous and mean. He made Donovan feel irreplaceable on some nights, and like nothing on others.

Donovan hated how much he cared for him. 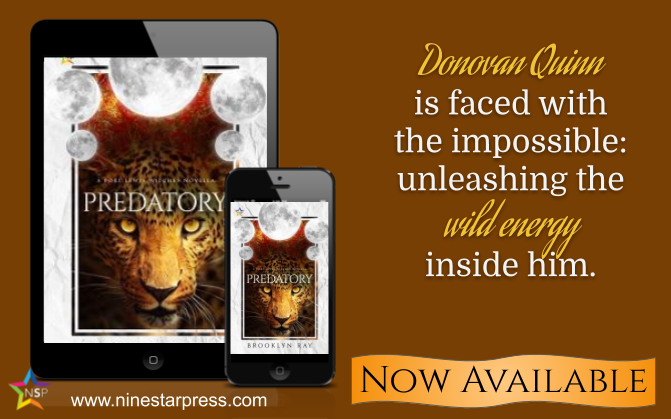 Brooklyn Ray is a tea connoisseur and an occult junkie. She writes queer speculative fiction layered with magic, rituals and found families.