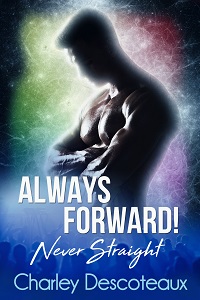 Baxter Bryan is the nerdy half of BaxCo, a start-up in Portland’s Silicon Forest creating cutting-edge high-tech toys. He’s also a hermit. When BaxCo sponsors the Portland Rock and Roll Half Marathon, Bryan decides to break out of his comfort zone and do more than listen to the music with a beer in hand. The race has barely started when he bumps into a fit, handsome man, causing sparks to fly. But the long hours needed to make BaxCo a success aren’t the only reason Bryan spends most of his time alone in his apartment.

Cay Nissen runs every day to stay in shape. He would love to run away from his job in a Silicon Forest cube farm, but keeps returning to support his teenaged daughter. His true love is music. Cay writes songs for the band he helped form in high school but doesn’t see any way to turn music into a career. The half marathon seemed like a decent way to pass a Saturday, make his boss happy, and catch a performance of his old band all at the same time. When he meets a man who sparks his interest, the safety of his cubicle isn’t the only part of his life that’s in jeopardy of changing.

I loved this story of two 40ish men finding love. Bryan and Cay are both nice guys who connect quickly, yet find out the hard way that keeping secrets in a relationship is not the way to go. I liked that, although they are different, they’re both trapped within self imposed prisons in a way. Bryan from his past—his ex is a total arsehole—and Cay trying to do the right thing to support his daughter.

I thought their reactions when they both discovered the truth about each other was realistic. Knee-jerk reactions when emotions run high do tend to stop people thinking clearly in the moment. It makes both men feel real, and I liked that they both had to face some realities about their life in order to move forward and be true to themselves.

The supporting cast are great. I love stories with a strong sense of family, and this one also has several strong female characters, which is always an added bonus. Val and Mac are forces to be reckoned with, and are supportive, yet don’t shy away from the truth when it needs to be told. I liked Bryan’s cousin, Rosie, too, and the part she plays in the story. I also have a weakness for stories in which music plays a part, so this ticked a lot of my reading boxes. I’m not going to spoil about source of the title, but using it was brilliant, and worked on more than one level.

All in all I thought Always Forward, Never Straight was a very satisfying read. I’d recommend it to readers who like slightly older characters, a strong sense of family, and a story that keeps you turning pages to make sure the characters get their happy ending. 5 out of 5 stars.