Big thanks to Gay Book Promotions for the opportunity to read and review! 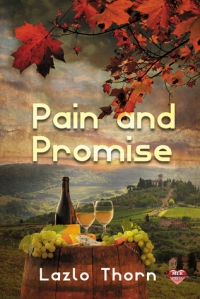 Blurb:
“Didn’t anyone ever tell you? Pain and promise, they’re all mixed up in our lives. A bit like good sex, really.”

June, 1981: The small town of Frentana on the Adriatic coast of Italy was the last place Bobby would have suspected that his titanic struggle with being gay would come to a head. But then he hadn’t reckoned on the town’s evil secret weapon – Dario, a Michaelangelo man with a missionary zeal for sex with men and the tightest trousers that Bobby had ever set eyes on. But then Bobby wasn’t the first Englishman in that bright land where the olive trees grow, to be dazzled and beguiled by a local boy. For there was another love story that had yet to be told. A hidden affair separated from Bobby and Dario by almost forty years. An inspiring tale of a great war-time romance between two very special young men and one with which Bobby would become strangely linked.

Although this story jumps around in time between chapters and scenes, I still found it easy to follow, and thought the dual time lines gave insight into the main characters and their reactions and relationships. I liked how the stories interconnected, although it took a while for everything to come together and reveal exactly how closely they did.

I found it difficult to connect to the main characters in the early chapters. Bobby, in particular, comes across as detached, but that makes sense as it’s revealed he’s trying to keep his true self at arms’ length. He tells a lot of his story, instead of showing, but I figure that’s another way to keep himself safe, and not get emotionally involved. Once he does accept himself, the story is a much easier read, as is his life. His happy ending didn’t turn out the way I expected, but I think that is one of the strengths of the story.

I loved Tommaso, not just as a younger man in love, but also as an older one being a caring uncle, and then again as an elderly man in ill health. I thought the resolution of the note Alfredo leaves him was perfectly done, and very sweet. The scene when he mistakes Bobby for Alfredo is touching and heartbreaking all at once.

The language for each time reads true to the time, and sets it within the period well. I enjoyed the descriptions, especially of Italy with its beautiful settings, and interesting people. I did find, however, that some of the sexual descriptions were a little too ‘purple’ for my taste, but that calmed down as the story progressed.

I must admit I enjoyed the 1940s part of the story more, and would have loved to have seen more of their relationship, but as the two stories’ merged, I found myself very emotionally invested in Bobby’s story, and needed to keep reading to find out what happened. The author made me cry, darn it, which is a sign of very powerful emotive writing.

Pain and Promise is very much a coming of age story about needing to be true to yourself. I’d recommend it to readers who enjoy dual time line stories, and don’t mind persevering with characters in order to enjoy and be touched by a beautifully written last quarter of the book. 4 out of 5 stars.

Anne Barwell lives in Wellington, New Zealand. She shares her home with a cat with “tortitude” who is convinced that the house is run to suit her; this is an ongoing “discussion,” and to date, it appears as though Kaylee may be winning. In 2008, Anne completed her conjoint BA in English Literature and Music/Bachelor of Teaching. She has worked as a music teacher, a primary school teacher, and now works in a library. She is a member of the Upper Hutt Science Fiction Club and plays violin for Hutt Valley Orchestra. She is an avid reader across a wide range of genres and a watcher of far too many TV series and movies, although it can be argued that there is no such thing as “too many.” These, of course, are best enjoyed with a decent cup of tea and further the continuing argument that the concept of “spare time” is really just a myth. She also hosts and reviews for other authors, and writes monthly blog posts for Love Bytes. She is the co-founder of the New Zealand Rainbow Romance writers, and a member of RWNZ. Anne’s books have received honorable mentions five times, reached the finals four times—one of which was for best gay book—and been a runner up in the Rainbow Awards. She has also been nominated twice in the Goodreads M/M Romance Reader’s Choice Awards—once for Best Fantasy and once for Best Historical. Anne can be found at https://annebarwell.wordpress.com
View all posts by Anne Barwell →
This entry was posted in book review, gay book promotions, mlr press. Bookmark the permalink.