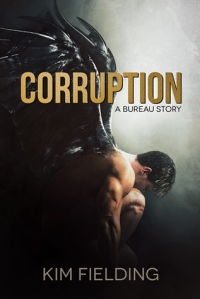 Blurb:
Once a proud demon of the night sky who carried nightmares to humans, Tenrael has spent decades in captivity as the star attraction of a traveling carnival. He exists in miserable servitude to men who plunk down ten dollars to fulfill their dark desires.

Charles Grimes is half human, half… something else. For fifteen years he’s worked for the Bureau of Trans-Species Affairs, ridding the country of dangerous monsters. When his boss sends him to Kansas to chase a rumor about a captive demon, Charles figures it’s just another assignment. Until he meets Tenrael.

This packs a lot of story into not many pages. The world building is interesting, detailed, and a mix of paranormal and historical. I’m very happy this is the first of a series about the Bureau, an organization that investigates the paranormal. This story has a noir feel, with its atmosphere and setting, which hooked me in right from the beginning. The descriptions are very visual, and I had a clear picture in my head of what I was reading. The time period isn’t stated but it felt very 1920s/30s.

I loved the characters, and the contrast between them. Tenrael’s resignation to his position came across very clearly, and I felt sorry for him. Sometimes the monsters are the humans. I also loved the connection between Tenrael and Charles and how they complemented each other.

The set up for the story is fabulous, and the world building and characters left me wanting more.

I’d recommend Corruption to readers who enjoy short stories with detailed world building, deep characterization, and a story that sucks you in from the first page. 5 out of 5 stars.