A big welcome to J.L. Baldwin as part of her release blitz with Enticing Book Promotions for Racing Christmas.

There are only two things Vincent Henderson loves.

Speeding around on the track has always fueled his insatiable adrenaline appetite. A devastating loss has left Vincent without the Christmas spirit. Now, with history threatening to repeat itself, his focus has been turned to fixing his father’s old race car so he can have the strength he needs get back on the track where he belongs.

That is, until Maybelle Tomlinson comes racing into his life, stopping him in his tracks.

Growing up as the typical sweet, southern belle, Maybelle is the epitome of what Christmas is all about. She loves everything about the holiday. From the tree, to the lights, and everything in between.Tennessee Christmases were always spent in a place she absolutely loves…her family’s bakery, with her mother’s signature creations.

When an impromptu holiday vacation throws Maybelle directly into the path of Vincent, she finds out he isn’t as amazing as she once thought. He’s rude, arrogant, and downright insensitive, but makes Maybelle’s heart race faster than any car would. Digging deep to find the man she once imagined is not going to be easy, but it’s a challenge Maybelle is up for.

It’s the adrenaline rush of a lifetime, but crossing the finish line isn’t always going to result in a happy ending. 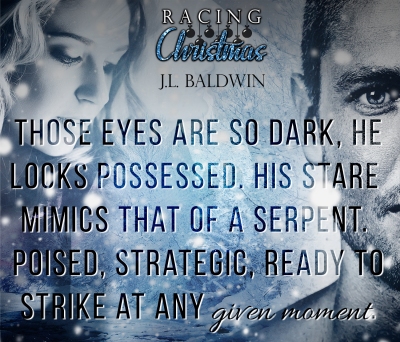 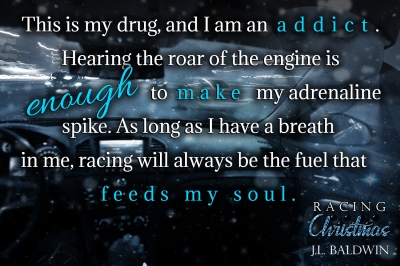 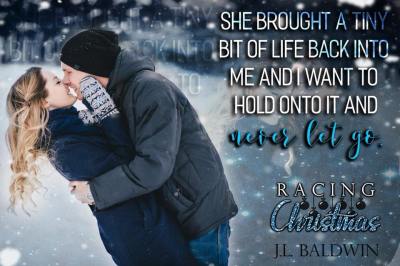 In her free time when she isn’t writing, she can be found with a book in her hand, obsessing over Disney, thinking about a sunny beach somewhere, all while still thinking about the stories that have yet to be written.

J.L. is known for writing sexy, enticing romance with delicious, devious twists that are sure to entrance you for years and years to come.