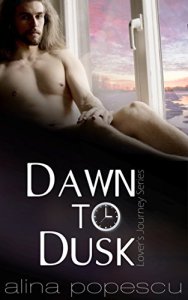 Blurb:
Edi’s life is made up of precious moments.

That first encounter with Robert in rural Romania at eleven. A summer spent together in the same setting a year later. Their first text exchange in high school. The first sexual experience. The first heartbreak—the second and third and fourth chance. The point of total breakdown and the despair of failing. More love than anyone could have warned him about.

No matter how much time passes, no matter how different their paths, every meeting brings Edi and Robert closer together. Those stolen moments shine brighter than any. Yet loving Robert is not easy, not when Edi wants to be true to himself and is met with dishonesty. Or when Robert keeps parading new conquests and ignores Edi more often than not.

Edi has always loved Robert, but he must decide if his journey leads to or away from his childhood friend. Is it true love or is Edi just unable to let go?

I love reading stories set in different countries, and Alina Popescu’s descriptive writing makes Romania come alive. Her prose has a lovely flow to it, and I found it easy to visualise the scenes she painted with her words. I also thought the way she split the different ‘chapters’ into different parts of the day eg Late Morning, Noon, was really cool. Those times of day don’t just provide ‘chapter’ headings but progress the story from Dawn to Dusk. I thought the title was very apt for this story, considering Edi’s journey from childhood to adulthood and his realisation that he is in not interested in girls, and in love with Robert.

His love and need for Robert felt very tangible and real, and I really felt for him, even when I wanted to yell at him and ask him what the hell he was thinking. The author does a great job in capturing his emotions and making him a sympathetic character. On the other hand, Robert is one of those characters you want to hate, especially with how he behaves, and his priorities and excuses, yet at one point I almost felt sorry for him. Kudos to the author for that one. Each time Edi and Robert broke up, and got together again I wondered how long it would last this time.

I loved the supporting cast especially Evelina and Sebastian. I love strong female characters in MM romance, and Evelina is a very good friend to Edi. I was happy to learn that book 2 in this series is Sebastian’s story, as I really felt for him, and the situation he is in, obviously in love with Edi, and having to watch his best friend self-destruct because of his love for another.

Dawn to Dusk is not always an easy read in places, and I got frustrated with Edi continuously being hurt by Robert, yet I could relate to why he kept taking it back, and understand it too. Edi’s story is a very realistic.

I’d recommend Dawn to Dusk to readers who enjoy a contemporary romance that doesn’t necessary have a HEA, interesting flawed characters, and stories set in different countries. 4 out of 5 stars.

Blurb:
Since he was thirteen, Sebastian’s every precious moment was connected to his first crush, Edi. His protector through his toughest school years, Edi has always guided Sebastian’s choices. Love, lust, the realization he was gay, his passion for sports and karate, his studies and career of choice, everything in Seba’s life is somehow linked to Edi.

Sebastian’s love never faltered over the years, not as he challenged himself to catch up to Edi. Nor when Edi’s on and off boyfriend, Robert, showed up to wreak havoc in their lives.

Sebastian has shaped his life to revolve around Edi—his friend, roommate, and occasional lover. But is that the right path for him, or should he start a new journey, one that takes him away from Edi all the way to another country? And will running away solve anything in the end?

Dusk to Dawn is not only a companion story to book one in the series—Dawn to Dusk—but continues where that left off, after telling what has already happened from a different perspective.

Starting this story, I wasn’t sure what to expect as I’d read some of it was a retelling of events I’d already read, but I was very pleasantly surprised. Although some of the scenes are replayed from Sebastian’s perspective there are others that are new. I found Sebastian’s ‘take’ on events refreshing, and the author does a great job in showing how a point of view shades the lens through which we as readers view a situation and/or character.

As with book one, the descriptions are fabulous, and it was very easy to visualise what and who I was reading about. One that stood out for me in particular was the description of a bus ride as “like being out at sea on restless waters.” I also liked the contrasts shown between the UK and Romania, especially with the freedom—or not—to be obviously with another man in public.

I’d already liked Evelina from Dawn to Dusk, but this story provided more insight into her and Sebastian sees a slightly different side to her than Edi does. Elena—Sebastian’s friend—is also a strong female character, and I loved her, and both women’s roles in this.

The times of day play their part as chapter headings in this story too, but as the title suggests they lead toward a more hopefully happy ending. Dawn, after all, is the start of a new day, while dusk brings with it other connotations.

I really felt for Sebastian as he loves Edi “quietly and in secret.” I thought Edi’s response when he discovers Sebastian’s true feelings towards him was realistic, and I had to keep reading to find out whether they do finally get together.

Although Dusk To Dawn could be read alone, I think it’s a far more satisfying read if you start with Dawn to Dusk so I’d recommend reading them together if you can.

I’d recommend Dusk to Dawn to readers who like contemporary romance with interesting flawed characters who need to work for their HEA, a strong supporting cast, and stories set in other countries. 5 out of 5 stars.