A huge thanks to IndiGo Marketing and Design for the opportunity to read and review this book! 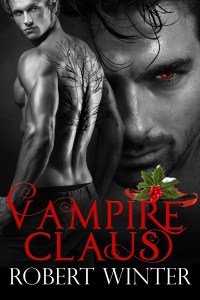 Blurb:
’Twas the night before Christmas, but what’s stirring is a little more dangerous than a mouse.

Taviano is nearly two hundred years old and never wakes in the same place twice. Weary and jaded, the vampire still indulges in memories of childhood Christmases in Naples. He lingers in shadow, spying on mortals as they enjoy the holiday.

When Taviano spots a handsome young man in Boston loaded down with presents and about to be mugged, he can’t help but intervene. Soon he’s talking to joyous, naïve, strong-willed and funny Paul, a short-order cook who raised funds to buy Christmas presents for LGBTQ children. Before he knows what’s happened, Taviano is wrapped up in Paul’s arms and then in his scheme to get the presents delivered by Christmas morning.

A vampire turned into a Christmas elf… What could go wrong?

Vampire Claus is a 30,000-word standalone gay romance about a lonely vampire and a fearless mortal with no instinct for self-preservation. A heartwarming ending, no cliffhanger, and a young man who discovers he has a thing for fangs. Isn’t that what Christmas is all about?

This is the first story I’ve read by Robert Winter. I loved it, and will need to read more. His writing style is very easy to read, and I was impressed by how he managed to fit so much world building and characterisation into a short novella.

I really liked the world building, and in particular the vampire mythos in this story. Some of it is the usual vampire lore but there are a few interesting differences. I particularly liked the idea of the blood beast, and it having its own ‘voice’ and agenda. With the way the story ended, I’m hoping we haven’t seen the last of this world or its characters.

I also liked Taviano’s background, and the fact that he was still a devout Catholic and missed being able to go to Mass. Given his Italian background and the time in which he was born, this felt very realistic. I did guess the connection between his youth and the current situation, but it didn’t detract from the story. Instead I found myself high-fiving with a ‘yes, I knew it!’ I love it when things like that come together so well.

Paul’s an interesting character too, and one of the strengths of this story is the importance of family. Although his parents have rejected him because of his sexuality, I liked that his relationship with his grandmother was still strong. In some ways he comes across as a little naive, but that’s one of his strengths as well, and it contrasts with Taviano’s experiences. I loved the descriptions of his tattoos. The blood beast’s reaction to him is interesting, and I can’t help but wonder what its agenda really is.

The showdown later on is very action packed, and I sat up far too late reading because I had to find out what happened!

I loved that being a vampire included magic, and the scene in the shelter is very much a reminder of the Christmas season. Paul’s words to Taviano sum up the warm fuzzy feeling I had at the end of the story perfectly: “Every great love story begins somewhere. Maybe this is ours.”

I’d highly recommend Vampire Claus to readers who enjoy stories about vampires which are a little different, a feel good Christmas story, and interesting characters who complement each other. 5 out of 5 stars.

Anne Barwell lives in Wellington, New Zealand. She shares her home with a cat with “tortitude” who is convinced that the house is run to suit her; this is an ongoing “discussion,” and to date, it appears as though Kaylee may be winning. In 2008, Anne completed her conjoint BA in English Literature and Music/Bachelor of Teaching. She has worked as a music teacher, a primary school teacher, and now works in a library. She is a member of the Upper Hutt Science Fiction Club and plays violin for Hutt Valley Orchestra. She is an avid reader across a wide range of genres and a watcher of far too many TV series and movies, although it can be argued that there is no such thing as “too many.” These, of course, are best enjoyed with a decent cup of tea and further the continuing argument that the concept of “spare time” is really just a myth. She also hosts and reviews for other authors, and writes monthly blog posts for Love Bytes. She is the co-founder of the New Zealand Rainbow Romance writers, and a member of RWNZ. Anne’s books have received honorable mentions five times, reached the finals four times—one of which was for best gay book—and been a runner up in the Rainbow Awards. She has also been nominated twice in the Goodreads M/M Romance Reader’s Choice Awards—once for Best Fantasy and once for Best Historical. Anne can be found at https://annebarwell.wordpress.com
View all posts by Anne Barwell →
This entry was posted in book review, IndiGo Marketing. Bookmark the permalink.