A big welcome today to Dale Cameron Lowry who is dropping in for an interview as part of the blog tour for the MMM Anthology Myths, Moon, and Mayhem. 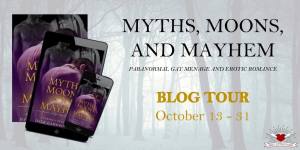 Can you tell us a bit about yourself and your writing?
My number one goal in life is getting my cat to stop eating the dish towels. My close second is to write things that make people feel like they’re not alone in the world.

I had an international upbringing. My earliest memories are from living in Madrid, Spain, where I learned Spanish alongside the English I was learning from my parents, with some German tossed in by the Catholic nuns who ran my nursery school. I began writing for fun when I was a kid living in the Netherlands and needed something to do whenever it rained—which felt like five times a day. When I wasn’t making up stories, I was reading, fighting with my siblings, or practicing writing in Japanese, which some of my classmates were teaching me. My dad also spoke Japanese, but his literacy wasn’t great, although it was good enough that he could make out some of the Chinese subtitles when we watched the Peking acrobats on TV. (Why were the Peking acrobats on Dutch TV with Chinese subtitles? I don’t know. I just lived there. And why would knowing Japanese help someone read Chinese? Here’s a Wikipedia article.)

I’ve been making up stories ever since. Queer Mormons have a way of popping up in my work. So do immigrants and emigrants, people with disabilities, multilingual folks, and others who, like me, spend their lives navigating multiple cultures.

Can you tell us about your new release? What inspired you to write it? How did you come up with the title?
Myths, Moons, and Mayhem is a multi-author collection of nine paranormal stories featuring gay or male-male-male threesomes. It was conceived over a Facebook chat I had with Sexy Little Pages publisher Anna Sky last winter. She thought it would be fun to release a Halloween anthology of gay ménage erotica with that title, and ever the sucker for a good pun (the book’s initials and the abbreviation for gay ménage are both MMM), I naturally agreed.

I’d found my way into paranormal fiction almost by accident a couple years earlier. I’d come across a call for submissions that sought paranormal erotica. My first thought was, “Ghosts having sex? How does that work?” But something hooked me, and I ended up writing the first draft of what I would eventually publish as “Ghost of a Chance” in my anthology Falling Hard: Stories of Men in Love.

I also ended up falling in love with the genre. It’s so liberating. I can let my imagination run wild and play with a lot of themes on a metaphorical level, which can give them more emotional resonance than they might have in a reality-based story.

In the submission call I put out for Myths, Moons, and Mayhem, I didn’t require happy endings. With it coming out around Halloween, I figured people might want to submit horror (which I love), or maybe even literary stuff that made people feel awful (that’s the definition of “literary,” right?). But every submission I got had an upbeat ending. And romance played a big role in the stories, too. I guess lots of writers are like me—they like to make readers smile.

If you get a rejection letter, it doesn’t necessarily mean your writing is bad. It just means the story isn’t a good fit for the editor making the decisions.

What book are you reading at the moment?
I’ve read very little fiction lately, as I’ve been doing a lot of research reading for a romance I’m writing that’s set in Madagascar. The book I’m currently reading is a doctoral dissertation from the 1990s that I got through interlibrary loan. It’s Meanings in Madagascar: Cases in Intercultural Communication by Ølyvind Dahl. This afternoon while taking my cat on a walk (I do that to keep her from eating the dish towels), I read a chapter on how people think about time in Western and rural Malagasy cultures.

In much of Madagascar, people don’t decide when to do things based on the clock, but based on an event happening. So the bus doesn’t leave at a certain time each day; it leaves when it’s filled with passengers. If it takes one minute to fill up with passengers, great. If it takes half a day, then you wait half a day.

I already knew this, having been to Madagascar. But the book broke down the cultural reasons that Westerners get so attached to the clock, and the reasons Malagasy tend not to. It was a fascinating read, helping me step back from my own worldview and see how it’s a way of thinking, rather than an ultimate reality.

What are your writing and personal goals for 2017 and beyond?
One of my goals is to finish my Madagascar romance. It’s due in February, but it would be nice to have it done by the time I visit my mom for Christmas so I don’t have it hanging over my head. I also have a draft and two outlines for three separate novels about gay Mormons, but I don’t think I’ll finish all that next year. (Told you I write a lot about queer Mormons!)

What are you working on at present? Would you like to share a snippet?
Lordy no! I’m almost superstitious about not sharing snippets from works in progress. I’m afraid if I put stuff out there, I’ll get the same sense of accomplishment I get from publishing, and I’ll never actually finish writing the piece. 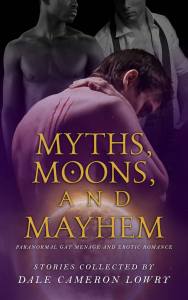 Myths, moons, and mayhem make the perfect threesome—and so do the men in this anthology.

Penned by favorite authors such as Rob Rosen and Clare London, as well as by newcomers to the genre, Myths, Moons & Mayhem is an eclectic mix of paranormal lust and polymythic beings that will spark your fantasies and fuel your bonfires.

Inside Man by Clare London—At a London pub, a tear in the veil between the dead and living opens up new possibilities for a ghost who could only ever watch the men he desired, but never touch.

The Secret of the Golden Cup by Rebecca Buchanan—A classics professor finds himself at the center of a magical war. With an unfairly attractive student and a campus janitor as his only allies, can he stave off the forces of evil?

When The Big Moon Shines by Carl Redlum—A college student is intent on hunting down the man who turned him into a werewolf. But his mouthwatering neighbors keep getting in the way.

Careful What You Wish For by Elizabeth Coldwell—Josh dreams of meeting Mr. Right, so his roommate offers help with a love spell. Neither man is prepared for what happens when the spell begins to work.

The Cave by Dale Cameron Lowry—Losing sleep to the sounds of his tent-neighbors’ nightly lovemaking has nature photographer Ethan at his wit’s end. What kind of magic can convince the two men he should join them?

The Endless Knot by Morgan Elektra—The fiery romance between a vampire and a werewolf threatens to burn itself to the ground until a human teaches them to temper the flame.

Squatchin’ by Greg Kosebjorn—Two Bigfoot hunters get more than they bargained for when they set out on an overnight camping trip to trail the legendary beast.

Celyn’s Tale by Rhidian Brenig Jones—A young Welsh farmer is haunted by visions of his future lover, only to discover that the lover is not one, but two—and not exactly human, either.

Close Encounter of the Three-way Kind by Rob Rosen—In this quirky comedy, aliens arrive from another galaxy, but they’re more interested in consensual exploration than invasion. Alien probing never felt so good! 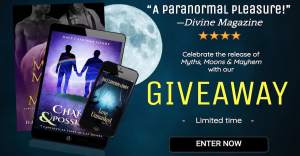 To celebrate the release of the paranormal gay ménage anthology Myths, Moons & Mayhem, Dale Cameron Lowry is giving away a bunch of paranormal and ménage ebooks for your reading pleasure. Prizes include:
• Chance & Possibility: Seven Fantastical Tales of Gay Desire, an eclectic selection of Dale’s previously published paranormal, fantasy, and sci-fi stories. Chance & Possibility isn’t available to buy anywhere.
• Pacific Rimming, a contemporary novelette about a middle-aged gay married couple who fall in love with a younger man while vacationing on Canada’s Vancouver Island
• Love Unmasked, the story of a gay man who’s unlucky in love because, once in a blue moon, he turns into a raccoon.
Enter to win here

About the Editor
Dale Cameron Lowry’s number one goal in life is getting the cat to stop eating dish towels; number two is to write things that bring people joy. Dale is the author of Falling Hard: Stories of Men in Love and a contributor to more than a dozen anthologies. Find out more at dalecameronlowry.com.
• Facebook Author Page
• Twitter
• Tumblr
• Goodreads
• Newsletter and free reads

Anne Barwell lives in Wellington, New Zealand. She shares her home with a cat with “tortitude” who is convinced that the house is run to suit her; this is an ongoing “discussion,” and to date, it appears as though Kaylee may be winning. In 2008, Anne completed her conjoint BA in English Literature and Music/Bachelor of Teaching. She has worked as a music teacher, a primary school teacher, and now works in a library. She is a member of the Upper Hutt Science Fiction Club and plays violin for Hutt Valley Orchestra. She is an avid reader across a wide range of genres and a watcher of far too many TV series and movies, although it can be argued that there is no such thing as “too many.” These, of course, are best enjoyed with a decent cup of tea and further the continuing argument that the concept of “spare time” is really just a myth. She also hosts and reviews for other authors, and writes monthly blog posts for Love Bytes. She is the co-founder of the New Zealand Rainbow Romance writers, and a member of RWNZ. Anne’s books have received honorable mentions five times, reached the finals four times—one of which was for best gay book—and been a runner up in the Rainbow Awards. She has also been nominated twice in the Goodreads M/M Romance Reader’s Choice Awards—once for Best Fantasy and once for Best Historical. Anne can be found at https://annebarwell.wordpress.com
View all posts by Anne Barwell →
This entry was posted in anthology, blog tour, Interview. Bookmark the permalink.