Inhuman Beings by Richard May

A big welcome today to Richard May as part of his blog tour with Embrace the Rainbow Book Promotions for Inhuman Beings.

Can you tell us a bit about yourself and your writing?
I am a Gay man. I live in San Francisco. I was born in California but moved to New York to work in publishing. After quite a few years, I moved back to California to help take care of my aging parents. I continued to work in publishing out here, in sales. I’ve been an editor, sold subsidiary rights, been on the business side of things, had my own sales rep. company, and wound up retiring as a sales director in academic publishing.

How long have you been writing for, and what inspired you to start writing?
I’ve been writing since I was nine, thanks to my fourth grade teacher, Mrs. Sheets. She asked us to draw a picture and write a story about it. Mine was about a dachshund chasing a bowler hat on a windy day. I’ve been writing ever since. In my teenage years and 20’s, I wrote four and a half mediocre novels. I turned to stories in my 30s because, if the result was mediocre, it wouldn’t take me a year to find out.

How did you come up with the title?
All my protagonists were becoming involved with non-humans. I thought: what’s the opposite of human?

What was the hardest part of writing your book?
Editing it, definitely. I wrote for 9 months and edited for 18.

Did you learn anything from writing your book? What was it?
Historical research is a pleasure. Don’t be afraid to look things up.

Do you have any advice for other writers?
Write and read something every day. Enjoy your life; it’s your source material.

Why M/M?
I ended a 17 year relationship after seven years of trying to stick with my partner as he descended into alcoholism and madness. I was deeply unhappy and traumatized and so started writing happy-for-now stories about how men meet men to give myself hope that a good man could be found and that I could change enough to be good for him and myself. And, even though I’ve been with someone new for almost four years now, I’m still interested in how Gay men meet each other and work their way through obstacles to love or at least the hope of it.

Do you have any genres you prefer reading, and if so what are they? I do love a good mystery.
What book are you reading at the moment? Blood and Metal, a Wuvable Oaf graphic novel, by Ed Luce.
What other novels do you adore/ writers you follow? I read everything by Colm Toibin, Louise Erdich, and Cara Black.
Do you have a favourite genre that you like to write in? Historical fiction

Do you have a favourite character and/or book you’ve written? Who, what and why?
My favorite among my created characters is Chicken Man, about a fellow in New York City who’s gig to pay the bills is to dress up like a six-foot tall chicken and hand out fliers. It still seems like a hilarious life situation to me. Chicken man was very philosophical about it however, which is good. His life goal was to be a Broadway dancer.

Are there people in your life that annoy you, and you write into your books?
There are already plenty of books and stories written from a negative motivation. I wrote out of unhappiness and anger for years, and the result wasn’t very good. I began writing about happiness and how to be happy out of despair. I don’t want to add to the negativity and unhappiness of the world or in myself so I write happy stories, at least happy-for-now.

Do characters and stories just pop into your head, or do you take your time thinking about them?
My stories, at least the good ones, are almost always inspired by a visual—a photo, a film image, a painter, a dream, someone or something I see on the street. I don’t spend much time thinking about my writing until I begin editing. The writing flows out of me. My job is to get it down on the screen as quickly as possible.

Are you a panster or a plotter?
Definitely a pantser. I tried plotting novels, writing character outlines. Very boring. I don’t really like knowing. I want the story to reveal itself. I guess that’s why I write short fiction. It takes less time to make a short story orderly than a novel.

Do you write often? Is it on a schedule, or whenever you feel like it?
I write every day and advise everyone who wants to be a writer to do the same. I set aside time to write. The goal is three hours a day, Monday through Friday, but life too often intervenes and it might only be an hour or a half an hour. I don’t mind life intervening however. What do you have to write about if you don’t have any adventures?

If you could have any superpower or magical ability, what would it be and why? What would you do with it? And yes world domination is an acceptable answer.
I would like to have the ability to change people’s attitude toward life, to plink them on the head with my magic wand and make them stop wasting time on hating, conniving, playing the revenge card.

If you had access to a time machine just once, is there anything you’d go back and change? Either on a personal level or an historical event?
I wrote a story about this. It’s the last story in Inhuman Beings, “Ticket to Ride.” It’s one of the few essentially autobiographical stories I’ve ever written.

What are your writing and personal goals for 2017 and beyond?
To finish editing my third short fiction collection and send it to publishers
To publish a prose chapbook
To begin writing a novella

What are you working on at present? Would you like to share a snippet?
My third short fiction collection. It’s based on my Kindle series, Gay All Year. Here’s the table of contents:
GAY ALL YEAR
Table of Contents
January: Crossing the Line, a Martin Luther King, Jr., Day Story
February: Finding Good in Plenty, a Valentine’s Day Story
March: One Plus One, a Pi Day Story
April: Ripe Fruit, an Arbor Day Story
May: Bathing the Buddha, a May Holiday Story
June: The Man in Mirror, a Fathers Day Story
July: That July I Learned to Surf, a Summer Vacation Story
August: Kachina Dancer, an August Rodeo Story
September: Garden Party, a Labor Day Story
October: Disaster Day, a Columbus Day Story
November: Home on Leave, a Thanksgiving Day Story
December: Eight Days, a Hanukkah Story 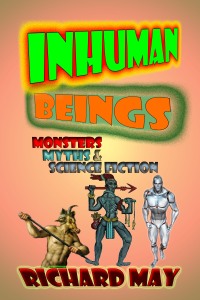 Fall in love with a shapeshifter in San Francisco, a ghost in Scotland, or a vampire in Russia. Time travel to 1920s Mesopotamia, 1600’s Africa, or to ancient Greece before time even existed. Find yourself on a distant planet, in love with a creature whose very being can destroy you, or in a post-apocalyptic world, drawn to a mutation created by the destruction of Earth.

“With Inhuman Beings, May seductively crosses the boundaries of time and space, the real and the imaginary, in these spellbinding tales of love and lust and things that go bump, not to mention hump, in the night.”

“Inhuman Beings is an enormously imaginative, genre-crossing work in the tradition of Peter Cashorali’s groundbreaking Fairy Tales but with greater breadth and franker eroticism; an impres­sive achievement.”

“Richard May’s new collection of short fiction contains an international menagerie of legendary creatures. There’s a Hindu god, a Native American cyclone spirit, a Chinese rain dragon, a moody Jewish golem, a sadistic Iraqi jinn, and more. Fans of the homoerotic melded with the speculative and the paranormal will savor every page of Inhuman Beings.”

“The beauty of this collection lies in its imagination – May is doing nothing less than writing a gay mythology, complete with monsters and fairy tales, imagined futures and refreshed pasts. His bold infusion of desire into mythology and encounters with the paranormal is unique, bracing and insightful. Inhuman Beings is full of a kind of sacred frivolity.”

Clocks told me it was after midnight, the new last day for the Daberleys at Enscombe. I climbed the central staircase, thinking of all the feet which had trod before me.

My father’s bedroom felt freezing so in quick order I stripped, not bothering to hang my clothes, and slid under the heavy blankets. Sleep came quickly but I was awakened soon after, or so it seemed, by the sound of footsteps in the hall outside my room. I was groggy and pulling myself into sitting when the bedroom door opened and the shadow of a tall man stood in the doorframe.

“Aren’t you afraid?” he asked in Stephen Taylor’s voice.

“No,” I lied, jumping out of bed and turning on the lamp, only belatedly covering myself with underwear tossed aside.

“But I do want to know what you’re doing in my house in the middle of the night.”

“I come here often,” was all he said as he entered the room and closed the door. I made ready for him as he came across the carpet but he just sat, slumping in the armchair. 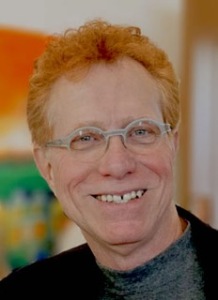 Richard May’s short fiction has been published in his collections Inhuman Beings and Ginger Snaps: Photos & Stories (with photographer David Sweet), his series Gay All Year on Amazon Kindle, in anthologies like Never Too Late, Best Gay Erotica, and the Lambda Literary nominated Outer Voices Inner Lives, and in literary journals, including Bay Laurel, Chelsea Station, and Hyacinth Noir.

Rick is from Sacramento CA and Brooklyn NY and now lives in San Francisco. He has red hair and truly believes in all things ginger. Another genetic stunner: he is 19th cousin to Queen Elizabeth II of Great Britain.

Anne Barwell lives in Wellington, New Zealand. She shares her home with a cat with “tortitude” who is convinced that the house is run to suit her; this is an ongoing “discussion,” and to date, it appears as though Kaylee may be winning. In 2008, Anne completed her conjoint BA in English Literature and Music/Bachelor of Teaching. She has worked as a music teacher, a primary school teacher, and now works in a library. She is a member of the Upper Hutt Science Fiction Club and plays violin for Hutt Valley Orchestra. She is an avid reader across a wide range of genres and a watcher of far too many TV series and movies, although it can be argued that there is no such thing as “too many.” These, of course, are best enjoyed with a decent cup of tea and further the continuing argument that the concept of “spare time” is really just a myth. She also hosts and reviews for other authors, and writes monthly blog posts for Love Bytes. She is the co-founder of the New Zealand Rainbow Romance writers, and a member of RWNZ. Anne’s books have received honorable mentions five times, reached the finals four times—one of which was for best gay book—and been a runner up in the Rainbow Awards. She has also been nominated twice in the Goodreads M/M Romance Reader’s Choice Awards—once for Best Fantasy and once for Best Historical. Anne can be found at https://annebarwell.wordpress.com
View all posts by Anne Barwell →
This entry was posted in blog tour, embrace the rainbow book promotions, Interview. Bookmark the permalink.

3 Responses to Inhuman Beings by Richard May