Book Review – Wish You Were Here by Asta Idonea 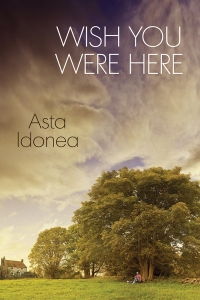 Blurb:
The death of Oakley’s sister has left his family broken and buried beneath their grief. In an attempt to get out from underneath their pain, they rent an isolated cottage in the Cotswolds. For Oakley, it’s an exercise in futility. He doesn’t see much hope for things to get back to the way they used to be, and he’s bored and restless as he waits out the time until he can return to the city and university. All of that changes when he meets local boy Bobby, and the connection between them is instant. Within a few days, Oakley is ready to walk away from everything to stay with Bobby. However, Bobby has problems of his own, and they might be more than the budding romance can survive. But they might also give Oakley a new perspective on his own situation.

:
This is the first story I’ve read by Asta Idonea, and I loved it.

The first scene set the mood immediately, and pulled me into the story. Although it’s not a long read, I didn’t feel as though it was too short either. The characters still had enough room to grow, and I got invested in them quickly. The ending left me with a bittersweet feeling, as it’s not really a HEA, yet I still felt hope for the characters’ future. Both Oakley and Bobby have a lot to work through, and I liked the way they grew as the story progressed.

I had worked out the plot twist early on, but part of that is because I read a lot of this genre, and it didn’t detract from the story. I thought the POV changes were very cleverly done, so that the secret of who Bobby really is isn’t revealed through his POV. The hints as to what is going on are subtle, and nicely done, with enough for me to guess, but not be sure until the reveal. The setting is a character in its own right, and adds to the feeling of the story. I enjoyed the author’s writing style—it flowed well, and I read the story in one sitting.

I’d recommend Wish You Were Here to readers who enjoy a shorter length story with interesting characters who aren’t always what they seem, a plot twist, and a hint of the paranormal. 5 out of 5 stars.

Anne Barwell lives in Wellington, New Zealand. She shares her home with a cat with “tortitude” who is convinced that the house is run to suit her; this is an ongoing “discussion,” and to date, it appears as though Kaylee may be winning. In 2008, Anne completed her conjoint BA in English Literature and Music/Bachelor of Teaching. She has worked as a music teacher, a primary school teacher, and now works in a library. She is a member of the Upper Hutt Science Fiction Club and plays violin for Hutt Valley Orchestra. She is an avid reader across a wide range of genres and a watcher of far too many TV series and movies, although it can be argued that there is no such thing as “too many.” These, of course, are best enjoyed with a decent cup of tea and further the continuing argument that the concept of “spare time” is really just a myth. She also hosts and reviews for other authors, and writes monthly blog posts for Love Bytes. She is the co-founder of the New Zealand Rainbow Romance writers, and a member of RWNZ. Anne’s books have received honorable mentions five times, reached the finals four times—one of which was for best gay book—and been a runner up in the Rainbow Awards. She has also been nominated twice in the Goodreads M/M Romance Reader’s Choice Awards—once for Best Fantasy and once for Best Historical. Anne can be found at https://annebarwell.wordpress.com
View all posts by Anne Barwell →
This entry was posted in book review, dreamspinner press. Bookmark the permalink.