I’m reviewing An Erie Garden Party today as part of V.L Locey’s blog tour with Creative Minds Promotions. Check out my LJ post for more information about the book, the tour, and the rafflecopter giveaway. 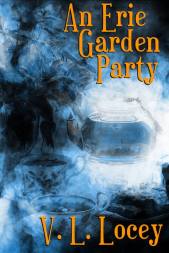 BLURB: Spring has finally arrived along the shores of Lake Erie and no one is happier than skunk shifter, Templeton Reed. Now that the snows have melted, he can frolic and play on the grounds of Lupei Manor, the formidable home that he shares with his life partner, Mikel Lupei, the alpha of the Lake Erie pack. What a pity that his joy is short lived.

Not only does a stranger appear to shake things up in the manor, bodies begin showing up on the grounds as well! Could the newcomer to the pack be the one viciously killing innocent humans and shifters? Or is there a more nefarious force at work lurking just outside the boundaries of the ancient manse Templeton, Mikel, and their LGBT friends call home?

Review:
This is the first V.L. Locey book I’ve read, and also the first with a skunk shifter.

Templeton Reed, and his mate wolf alpha Mikel Lupei are very different characters, and I thought the author did a really good job with characterisations. All the characters had very different voices, although the book is written in first person from Templeton’s POV. Templeton’s an interesting character and I enjoyed reading his perspective although it took me a while to get used to his rather flamboyant nature. I appreciated the fact that the author kept in mind the practical nature of shifting and that Templeton’s glasses didn’t just disappear magically but he had to be careful they were in a safe place before he shifted. I loved the fact he sprayed in skunk form and used it as a weapon when he needed to, and the fact that the full moon affects the wolves’ behaviour in human form as well.

I liked the world building in this story, and had no problems in following what was going on despite not having read any other books in this series yet. The magical community’s stance on LBGTQ was realistic, although very harsh, considering how its old fashioned views on other things. I also liked the interactions between those who have made their home at Lupei Manor and the sense of community there. There’s a glimpse of the wider magical world and who inhabits it as well, and more than a hint of the history and societies of others besides the wolves and skunks.

There’s also a murder mystery as part of the story, with dead bodies, and bit of dead bodies being discovered, and I got caught up in trying to figure out who the culprit was. A few new interesting characters also make an appearance, and I hope the author tells their story at some point.

I’d recommend this book to readers who like stories about shifters, alpha males, interesting world building, a generous dollop of sex, and with a murder mystery on the side. 4 out of 5 stars.

Anne Barwell lives in Wellington, New Zealand. She shares her home with a cat with “tortitude” who is convinced that the house is run to suit her; this is an ongoing “discussion,” and to date, it appears as though Kaylee may be winning. In 2008, Anne completed her conjoint BA in English Literature and Music/Bachelor of Teaching. She has worked as a music teacher, a primary school teacher, and now works in a library. She is a member of the Upper Hutt Science Fiction Club and plays violin for Hutt Valley Orchestra. She is an avid reader across a wide range of genres and a watcher of far too many TV series and movies, although it can be argued that there is no such thing as “too many.” These, of course, are best enjoyed with a decent cup of tea and further the continuing argument that the concept of “spare time” is really just a myth. She also hosts and reviews for other authors, and writes monthly blog posts for Love Bytes. She is the co-founder of the New Zealand Rainbow Romance writers, and a member of RWNZ. Anne’s books have received honorable mentions five times, reached the finals four times—one of which was for best gay book—and been a runner up in the Rainbow Awards. She has also been nominated twice in the Goodreads M/M Romance Reader’s Choice Awards—once for Best Fantasy and once for Best Historical. Anne can be found at https://annebarwell.wordpress.com
View all posts by Anne Barwell →
This entry was posted in blog tour, book review, creative minds promotions, torquere press. Bookmark the permalink.